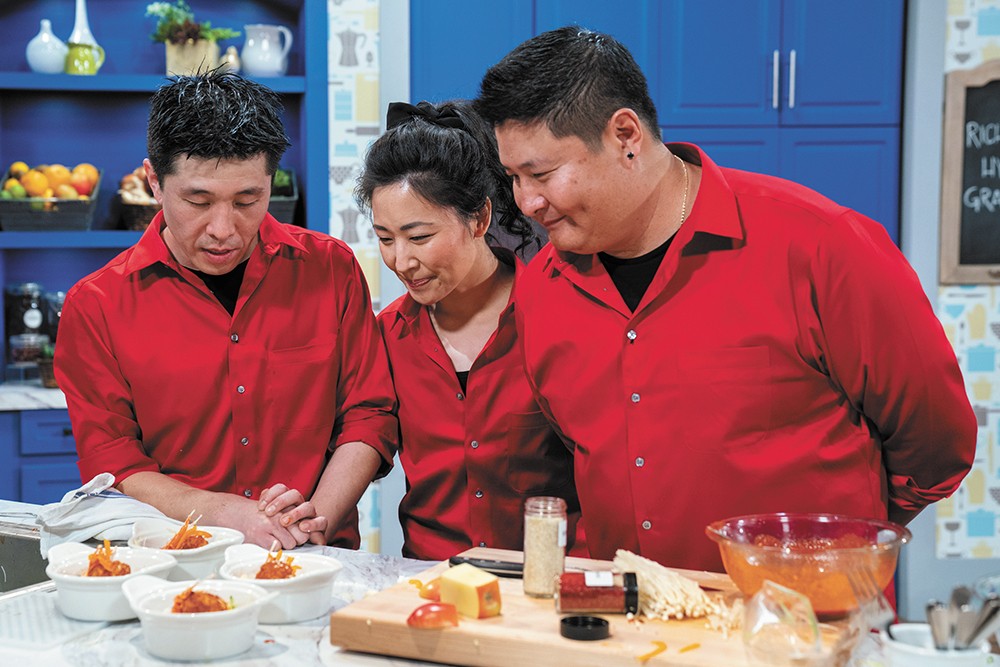 You, Annual Manual reader, already know the Inland Northwest culinary scene is great. But now the rest of the country is catching on, as many chefs and bakers behind restaurants in places like Spokane, Coeur d'Alene and Post Falls continue to get tapped to compete on Food Network shows.

Over the last year or so, multiple area chefs tried their hand at running around the game show supermarket on Guy's Grocery Games, and local family talent was highlighted when siblings Grace McNiel and Hyun Son of Momo Sushi.Wok.Grill in Coeur d'Alene competed with their brother Richard Son on Family Food Showdown. Others still took on the network's baking challenges and one even tried to Beat Bobby Flay.

From tasting the sweetness of victory to feeling the agonizing sting of defeat, the chefs did their best to shine for the cameras and show what the Pacific Northwest has to offer.

One of the first things you should know about getting on different Food Network shows is that you don't call them, they call you.

Actually if you're Tony Brown, owner and chef of Ruins, they might have to call you several times to even get you to call them back.

"They called the restaurant and left a couple messages," Brown says. "I'm really bad about returning phone calls, but I finally called back and immediately had a phone interview for an hour."

That's how the restaurant on Monroe was first featured on Diners, Drive-Ins and Dives in 2018. Then by spring 2019, the producers of another Guy Fieri show called to ask if he'd come on a special Mother's Day episode of Guy's Grocery Games with his mom, Marti Brown. They knew she'd helped him open Stella's Cafe and sandwich shop in 2012 (and to cheers from many, the restaurant announced its return this year in a new spot in the Saranac Commons).

"I think there's been something like 30 people total who've been on both Diners, Drive-Ins and Dives and Guy's Grocery Games," Brown says, "so apparently I'm in with Guy Fieri now."

Brown and his mom flew to California to film the episode and get their chance at $20,000 in prize money. On the way, they brainstormed what their challenges might be and strategized.

"The first challenge was a childhood favorite like what my mom would make for us when we were kids, but updated," Brown says.

He had to make her a shopping list so she could run around the store and gather ingredients without knowing what he was going to make. Successfully, she gathered what he needed to make "taco stacks," a layered casserole with tortillas, ground beef and enchilada sauce. 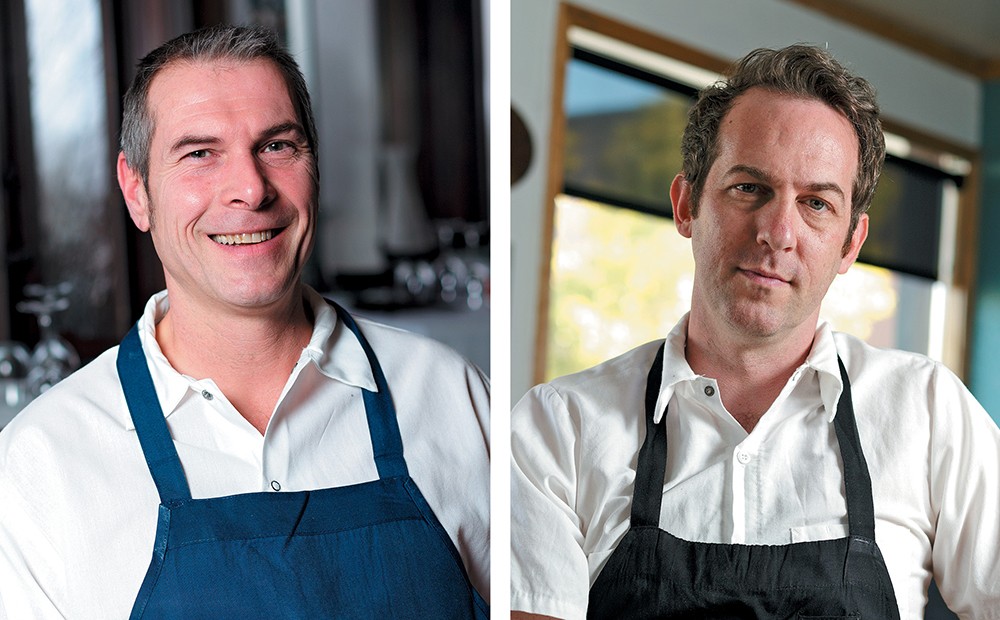 "[The judges] loved that one," Brown says. "They said it reminded them of their childhoods, too. Everyone has taco night when they're kids."

The two made it to the second and final round, where Brown was tasked with making one of his mom's favorite dishes.

"I actually kind of coached my mother a little bit [beforehand] because I didn't want her to say, 'My favorite dish is prime rib,' which would take six hours to cook," Brown says.

Instead, they went with a favorite fried pork schnitzel with stewed peppers and basil.

"That's something we make at Ruins all the time," he says.

In the end, they won, getting to the final challenge, where they had to run and gather ingredients to answer five trivia questions, each worth $4,000.

"They might say something about a soft Italian cheese in lasagna, so [you grab] ricotta," Brown says. "We found all five, so we won $20,000."

Brown says overall it was a great experience and he'd definitely go on again if asked.

Zirotti previously competed on an episode of Guy's Grocery Games but didn't make it to the final round, and then in fall 2018, he was one of two French chefs competing to Beat Bobby Flay.

The first challenge had Zirotti and his competitor do their best take on oysters. The Post Falls chef opted to broil his oysters with a butter sauce made with fresh morels and shallots.

The judges liked the flavor, but said there was just a little too much sauce on each of the oysters.

"The other chef had, I think, a better oyster dish than I did," says Zirotti, who didn't make it to the second round where he would've competed against Flay. "It was embarrassing."

With both shows under his belt, Zirotti says he thinks he's going to hang up his competing hat.

"I'm someone that's not camera shy or shy period, but then you have competition and I don't think I'm built for that," he says. "I'm more built for the thought of the entertainment than the competition. I put too much pressure on myself, think too much and therefore don't perform well in the moment."

But he's not taking the loss as a blow to his professional career, which has landed him a James Beard nomination and plenty of accolades.

"I'm proud of what I do," he says. "So I'm not waiting for those kind of things to give me a kick in the butt."

He still enjoyed his time traveling to New York for filming, although meeting Bobby Flay was more of a quick gruff handshake than when he met Guy Fieri, who spent maybe half an hour chatting with the chefs and putting them at ease.

"It was a good experience," Zirotti says. "I'm 55 years old. For this kind of experience to still happen in my life, I think it's a great opportunity. I think I would've been stupid to say no, no matter what the outcome."

For Ricky Webster, it was accomplishing another lifelong goal that got him his shot at baking for a national audience.

Two years ago, Webster was working at the Hotel RL and successfully pitched making a lifesize gingerbread house in the lobby to raise money for Blessings Under the Bridge.

"I love gingerbread houses. I used to build them with my cousins, my aunt would organize a thing every year," Webster says. "I think as a child you're kind of always looking at that and going, 'What is it like to live inside that?' and stories like Hansel and Gretel or Charlie and the Chocolate Factory kind of hint at what that world would be like."

After gaining national press for his massive undertaking, Webster was asked in summer 2018 to film for two baking shows: the Christmas Cookie Challenge and the Holiday Gingerbread Showdown. 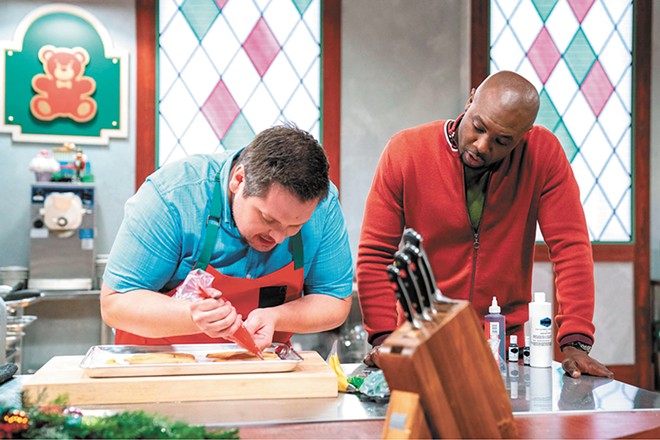 In the Christmas Cookie Challenge, he was up against fellow Spokane baker Amber Stout (featured in our cookie story in this section of Annual Manual). In the end, it was Webster who wowed the judges and won the $10,000 prize.

Webster says he's thankful he got the chance to film both shows, which meant taking time off from his current job as the business resource consultant for Sysco Foods in Spokane.

"I'm basically a consultant chef. Think like Gordon Ramsay but a nice version of that helping our customers with business models and recipes and staff training," Webster says. "I was lucky enough to be able to take that time."

It actually wasn't the first time Webster had gotten to compete on a baking show either: He'd gone on Cupcake Wars several years before. But that time, Webster says he watched the episode and could tell he wasn't quite acting like himself.

"I could tell I was a little stiff and maybe more of a puppet," he says of that first experience. "So this time I thought, 'I'm just going to show up and be myself. I'm comfortable with who I am and just want to be me and have fun.'"