About the chef: Tyler Schwenk began his culinary career at age 14, starting at the Coeur d'Alene Resort and working his way up to kitchen supervisor by the time he was 18. When the opportunity came to travel the world as a sous chef on a luxury yacht, Schwenk hopped on board and received training from a Le Cordon Bleu-trained chef. After a whirlwind experience at sea, he returned to Coeur d'Alene and eventually became executive chef of Beverly's. In 2015, Schwenk was encouraged to apply at the newly bought Kalispel Golf Course and has been at 1898 Public House ever since. His speciality is taking classic dishes and giving them a new twist with Asian fusions and local ingredients. A personal favorite of the chef is charcuterie, a love that comes from his grandfather who was a butcher in Portland for 50 years. 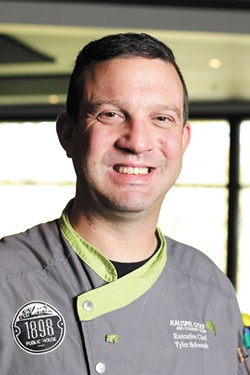 How it's made: It all begins with a PVC pipe. "I wanted to make it visually appealing by stacking it in a tower in a mold," Schwenk says. "What we do is we take avocado and put that in the bottom and we take the diced tuna and layer that with diced cucumber and then more tuna and then we put it in a PVC pipe mold and then when the order comes in we put it on the plate and unmold it so it is a tower."

Another unique aspect of the dish is a cloud of wasabi on the side, made of heavy cream and wasabi paste put into a foamer. More hints of heat are present in a wasabi aioli, along with a soy glaze for dipping. Crunchy dehydrated garlic and a spicy Thai vinaigrette, made from soy sauce, fish sauce and chili paste add more flavor this starter.

Chef's thoughts: "I just wanted to have something that was beautiful that tasted good. I mean, people immediately get it and then they just take the fork and smash it and mix everything together. It's definitely a 'wow' presentation," Schwenk says.

Not only is the dish visually stunning, it's pretty popular, too. He adds that anywhere from 25 to 40 ahi poke tuna dishes are ordered each night.

OUR thoughts: You'll have hard time digging your fork in and mixing together this carefully plated dish. Once you do, the spiciness of the wasabi mixes in with the melt-in-your-mouth ahi tuna and cool cucumber. Other elements of contrast are present in the softness of the avocado and tuna combined with the crunch of dehydrated garlic. The wasabi cloud tastes like whipped cream with a bite to it. Sit next to the floor-to-ceiling windows in 1898 Public House's dining room overlooking the golf course for good lighting to snap the ultimate food Instagram pic before diving in.

The original print version of this article was headlined "Tall Order"