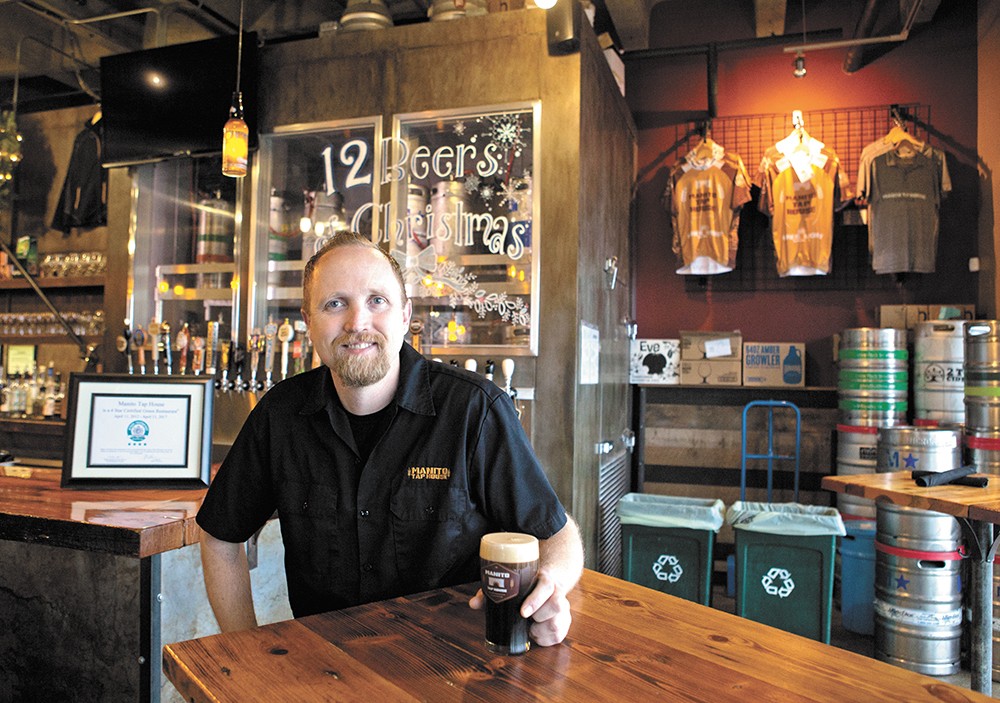 Visitors to the Manito Tap House on Spokane's South Hill go for the incredible beer selection and top-notch food, but if they pay attention to their surroundings, they might realize they're also supporting one of the most environmentally conscious restaurants in the country.

The interior walls of the place are lined with reclaimed old barn wood. The lights are LED or fluorescent. The bathroom counters are made from recycled paper. And a careful scan of the menu shows diners they're at a Four-Star Certified Green Restaurant, the only such-certified eatery in the state, and one of the few four-star spots in the country.

For owner Patrick McPherson, the decision to make the Tap House as energy-efficient and Earth-friendly as possible when he opened in 2011 coincided with steps he was taking in his own life, and some research he did about the restaurant business.

"I was certainly greening my own personal life at the time," McPherson says. "I'm no saint, but I continue to get better and better at it. But I was also doing the restaurant, and finding out that restaurants are some of the biggest users of utilities. They're just energy whores. They take so much energy, and there's so much waste."

McPherson looked around at several conservation programs before finding the Green Restaurant Association, a nonprofit that helps businesses go green by setting goals for their certification, educating them on options and introducing them to environmental consultants.

There were things already on McPherson's list before he got into the GRA's certification process; he knew he wanted to have low-flow faucets and urinals and LED lighting. He had limited dumpster space, so he was already conscious of eliminating as much waste and recycling as much as possible. He learned that buying appliances like EnergyStar fryers and refrigerators, a thicker-walled walk-in cooler, and an automated power system that ramps up and down based on various sensors' readings could help him reach a four-star level, so he went for it.

All told, McPherson figures the effort added about $30,000 to his start-up cost, money well spent considering the long-term energy savings and potential for other restaurants to hear about Manito Tap House and follow its lead to greening their own spots. So far, though, few have been in touch to ask about the four-star certification.

"It's just a slow process, becoming more aware and realizing the insane amount of energy it takes [to run a restaurant]," McPherson says. "The human population, it's baffling how much we consume."