The Brown Derby retains its historic vibe through a dramatic makeover 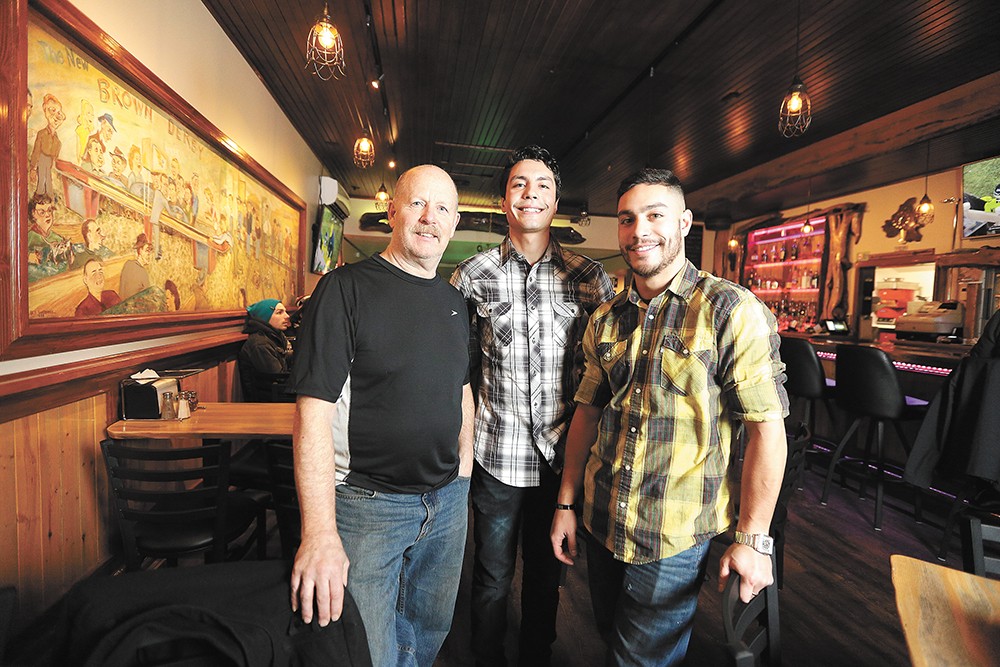 and the weathered and worn exterior giving no indication of the dramatic makeover happening inside.

Eventually, there were signs of life — electricity fueling the old sign jutting from the roof, the windows offering views of a shiny new interior, a sandwich board on the sidewalk proclaiming "Beer, Pizza, Pool — The Ultimate Dream?"

For new owners Dave Jones and his stepsons, Sean and Casey Yahrling, the "new" Derby is a dream of sorts, an opportunity for the family to work together while preserving the Garland District's venerable, historic bar, a place that started selling one kind of booze or another the day after Prohibition ended in 1933. But it's a dream realized only after months of nightmarish construction delays and headaches that at times stressed their checkbooks and their sanity.

When Jones first bought the Brown Derby in the spring of 2015,

he considered knocking it down to create parking for his adjacent Ferguson's Café. Instead, he partnered up with Casey and Sean to keep the drinks flowing, operating the tavern as they found it for about a year until deciding it was time to make their vision of the Derby come to life.

In the process, they ended up doing everything but knocking the place down to revamp it. The ceiling, beer cooler doors and a revered painting are the only things untouched.

Sean and Casey, 28, worked alongside a contractor and carpenter through the summer that saw all their planned reopenings fly on by, from Independence Day to the Garland Street Fair in August to Halloween. To make ends meet, they'd work shifts at Ferguson's between toiling on the Brown Derby space. They finally got to open their doors on Nov. 28 — the Monday after Thanksgiving weekend.

"It was really hard thinking, 'We're going to be done in three weeks,' and then seeing that day fly by," says Casey of their long, hot summer. "It was frustrating saying, 'Why were we thinking that day was even possible?'"

Sean says the whole job cost about $240,000. And while much of that went into things not obvious to the casual observer — new electrical and plumbing projects, redone walls — there's no mistaking that the Brown Derby has undergone a serious facelift. 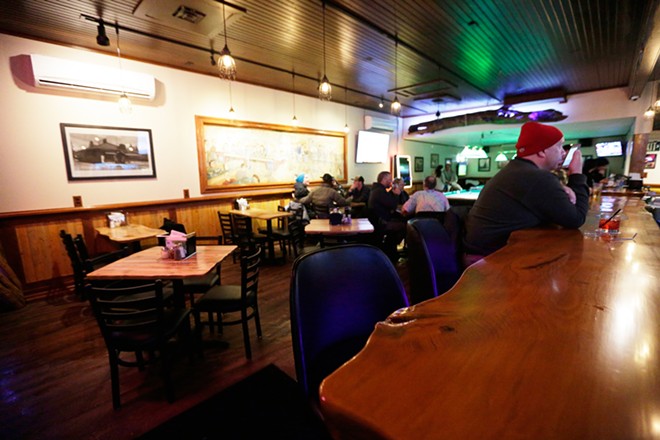 Young Kwak
Marty Richards, visiting from Madison, Wis., sits at the bar at The Brown Derby.

The new bar is topped by one continuous piece of blue pine,

while the tables and decorative flourishes behind the bar showcase natural wood inspired by the way the place looked in the Derby's famous painting by Bill Swanson, put in place in 1950 and running a good 10 feet wide on the wall opposite the bar. The rendering of a few dozen customers was important enough to preserve that they worked around it, even as they rebuilt nearby walls and floors. When they unveiled the painting from its protective cover, the stench of decades of cigarettes coming off the painting was so strong they realized that cleaning it was yet another project to add to their list.

Visitors to the old Brown Derby will recognize the setup: a bar to the right of the door, a few tables, pool tables and a jukebox toward the back. But the Derby has added a liquor license, making the "Tavern" label on its exterior sign obsolete, and with it a kitchen serving pizzas, sandwiches and bar grub. The beer selection has grown beyond cans of Rainier to include craft beers both local and regional, too; on a recent visit, No-Li, River City, Elysian and Kona were all part of an expanded tap lineup.

The remodel and addition of liquor and food was always part of the bigger plan, Jones says. He was inspired to buy the place in order to have some control over the activities next door to Ferguson's, and as an investment to one day help the 58-year-old retire from his days slinging breakfast at the diner. He also wanted to give his boys the opportunity to earn the experience of running a business, and the changes undertaken this summer should go a long way in helping the place survive and thrive.

"My plan was always to shut it down and make it nice," Jones says. "I'm a firm believer that if it's a dump, people aren't going to come to a dump. Not that it was a total dump, it was just a dive bar and needed more. It didn't have hard liquor, it didn't have food — all it had were Slim Jims and potato chips. That really limits the amount of money you can make, if you just have beer and wine and pull tabs."

For the Yahrlings, running the Derby represents the potential opportunity of a lifetime. Sean, an Army reservist, had returned from a tour of Afghanistan and was considering flight school when the opportunity came along. Casey was living in Seattle, but moved back to Spokane since "I'd dreamed of owning something myself" and he knew he and his brother would "be able to work together and have it work."

There have been challenges since Jones and the Yahrlings took over that go beyond the construction.

When they took over, they found that the Brown Derby didn't take in nearly as much as they'd imagined. And when a longtime bartender left, many of the old regulars went with him.

The "new" Derby just might bring some of them back, eventually. Jim Horton — known better as "Navy Jim" — is one of those old regulars who spent the months waiting for the Derby's reopening "bar-hopping" through places like the Hub and the Hi-Neighbor. While he likes what they've done with the place, he says the old vibe was "like Cheers" and it might take some time for the old crew to feel comfortable in the new environs. "I think it will be a while, if the old guys come around," Horton says.

From their perspective, the Yahrlings and Jones just hope people give the "new" Brown Derby a chance.

"It's really cool just having the opportunity to have a blank slate," Casey says. "It's just an open-ended thing to make this our dream. However we want it to work out, we can do that right now. Literally, whatever we want to do, we can do." ♦