Contestants in the Nuclear #Spiceawar will take the heat once more 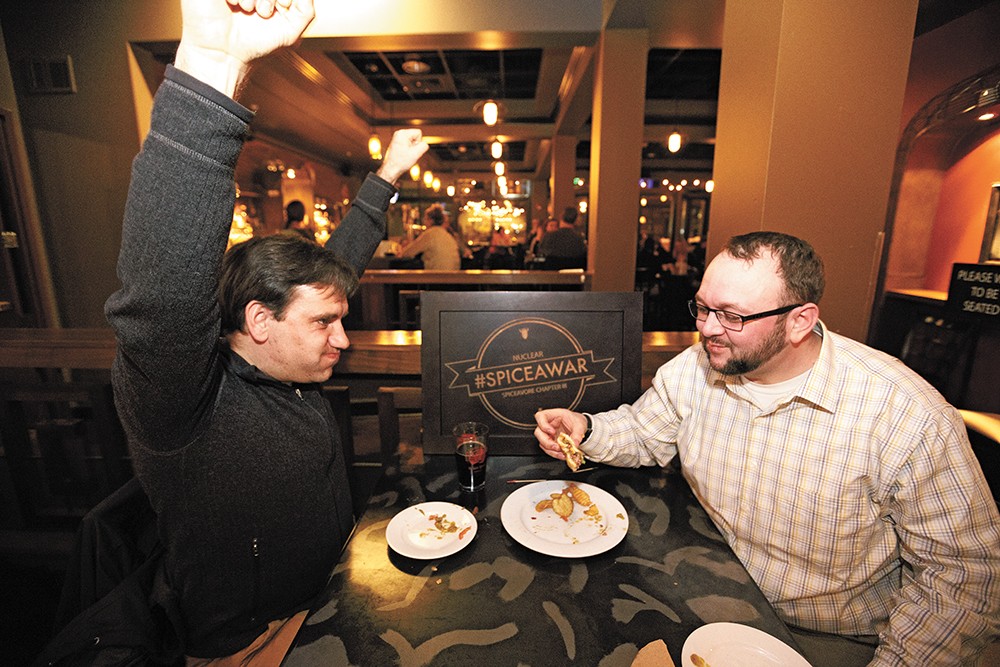 In the middle of the busy restaurant, two men bite into their piled-high burgers with abandon. Sweat begins to form on their brows; a pink flush crosses their cheeks.

"It has a good kick, a slow burn," says Remi André Olsen of the Saranac Public House #Spiceawar Burger. For a sandwich that includes habanero, serrano, jalapeño, ghost, de árbol, pequin, japonés, chipotle and cayenne peppers, it makes sense that Olsen and his cohort Patrick O'Halloran are sweating.

This isn't the pair's first time ingesting extreme heat. They are two of the creators behind next weekend's Nuclear #Spiceawar spicy foods contest, which will be held at Saranac. After the most recent event at the now-closed Blue Spark in 2011, the participants weren't sure they could handle another; it was just too painful to relive annually. They decided to retire the competition altogether.

"After the last one, we pledged to our wives we'd never do this again," O'Halloran explains.

But three years later, this battle of wills is back for the third time, breaking down into four rounds and a grand finale. It's every man and woman for themselves here — no teams.

"That means you have to eat everything," Olsen says with a smile.

Local restaurants, including Saranac, Santé Restaurant & Charcuterie, Spike's Philly's and More, Monterey Cafe and Brain Freeze Creamery, among others, will supply the hot dishes for 10 contestants to eat as quickly as possible.

"Spicy food is one of those things you're kind of scared of until you try it," says O'Halloran. "But then you build a tolerance and it becomes natural."

The idea for #Spiceawar came when a group of friends wanted to see who could take the most heat in one sitting. They asked area eateries to provide the food — items like hot wings, pulled-pork sandwiches and infused tequila.

Best of all, the contest allowed for mad smack-talking. Bart Mihailovich, the Spokane Riverkeeper, recalls the previous time he participated in the event.

"The day after was worse than the worst hangover ever," he says.

But he's back for more. "I don't like to lose, so I will overcome any kind of physical pain," he says.

But just how healthy is it to eat a bunch of spicy food in one sitting?

Craig Hunt, a local registered dietitian and nutrition coach, maintains that spice in one's diet is healthy thanks to antioxidants, but gorging can really irritate one's tissues and digestive tract.

"This is kind of like a burn in a way," he says. "The cool thing is, you can try something like this and the cell turnover in your mouth and digestive system happens relatively quickly."

According to Hunt, a gastrointestinal tract will regenerate new cells in three to five days.

At Saranac, Olsen and O'Halloran have polished off their burgers. They each grab napkins to wipe the spice from their fingers and chins. A look of satisfaction forms on their faces.

"That was nothing," O'Halloran says. ♦