Our tax system rewards all the wrong people, says journalist David Cay Johnston — but he has a plan to fix it 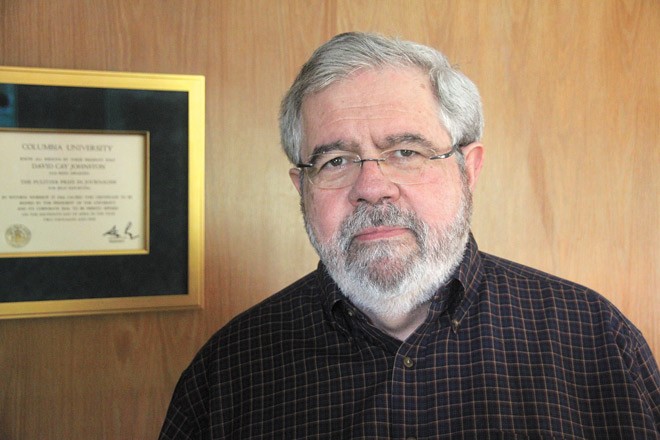 Bonk Jonston
David Cay Johnston has a plan to cut 5,000 pages from the U.S. tax code.

has spent so much time diving into the mess of the U.S. tax code, exposing outrageous loopholes, he has a Pulitzer Prize to show for it.

But it's one thing, in books like Free Lunch and Perfectly Legal, to prove the system is broken. Johnston has gone a step further. He's designing a new, simpler, more progressive tax code — cutting out 5,000 of the 5,348 pages in the current code. In particular, he takes aim at corporate welfare — taxes and subsidies that "take from the many to give to the already rich few."

In anticipation of his Feb. 18 appearance at the Fox, the Inlander had a chance to speak to him about the problems with local, state and national tax codes.

On why he started rewriting the tax code:

I have written for a number of years that America has a tax system well-designed for the economy of the last century: A national, industrial-age economy. ... We now live in the 21st century, in a global, digital-assets world, in which the primary value-added products in this country are numbers — that's what software is — and molecules, that's what pharmaceuticals are.

... In the current world economy, most of the values are intangibles. And we've seen that companies have moved them out of the country, and own them through foreign subsidiaries, and then they charge themselves for using their own property and turn profits into tax-deductible expenses, paid to themselves. ... We need a tax code for the 21st century. And nobody else has worked on it, so I finally said, fine, I'll have to do it myself.

On one reason why tax reform is so hard:

On the major difference with his tax plan:

The reason I call it the "honest tax" is that all gains are taxed. ... Under my plan, as long as your money stays in your account, you don't pay taxes. When you withdraw, you pay taxes. And when you die, that's deemed a withdrawal, and the taxes come due. ... The whole approach to this is to encourage savings and investment, and to make sure that every dollar of gain is taxed.

On which industries get the most corporate welfare:

Oh, God. The entire professional — or as I prefer to call them, 'commercial' — sports teams. Railroads. The Internet companies. ... The pharmaceutical companies. It's just all across the board. ... Why do you think there are tens of thousands of lobbyists in Washington? It's easier to profit from mining the public treasury and the law than from earning it in the marketplace. Why would you struggle in the marketplace to make a profit, when you could get a government rule that with one word, or five words, boosts your profits?

On what journalists should do differently:

Pay less attention to what politicians say, and more attention to what they do. Instead of spending so much time trying to dig up something that's hidden, mine the ocean of facts that are right there in the public record in front of you.

On the 529 college savings plans that President Obama recently abandoned his push to eliminate:

529 plans are upside-down subsidies. About 3 million people have them, and they tend to be higher-income Americans like me. ... If you want to give subsidies for kids to go to college, give it to kids who are good students, and smart, but poor. Don't give it to my kids, who grow up in a prosperous household and don't need it.

On why raising the minimum wage won't hurt the economy:

Is it worth it to drive 40 miles, round trip [from Spokane to Coeur d'Alene] because the price on the menu might be a little cheaper because they have lower wages over there? No. The cost of driving is 59 cents a mile, the IRS will tell you. In San Jose, California [with a higher minimum wage], there's no evidence that people are going to the other communities to eat.

What happens when you raise the minimum wage is people spend 100 percent of that money. They don't save it. And they reinvest in the community.

On whether an economic impact study can justify local subsidies:

All you need to ask is who paid for it. If the developer or the seeker of the money paid for it, it's going to be written to favor their interests. ... These quote-unquote studies, they're one-sided accounting. You count the benefits that will accrue to the business getting the subsidies, and you ignore the losses that will occur elsewhere. What these subsidies do is, they simply transfer business from unsubsidized businesses to subsidized businesses.

On threats from companies like Boeing to move their business to other states if they don't get subsidies:

It's blackmail. Give us money, or we will take away all the jobs in the community. Why should we be taxing ourselves to give money to profitable corporations? ... This is extortion. How do you deal with extortion? What we need to do is change the law. Congress should impose a 90 percent tax on any gift of cash or credit to a corporation. Do you think anyone would take a subsidy if they do that?

On the tax code in general:

Understand, the most political law in America is tax law. Our tax code is not about sound economics, the general welfare and building a durable society of free and prosperous people. Our tax code is about selling favors to the highest bidder, often in backdoor deals, and often in language that gives no hint about what the intention is. ♦