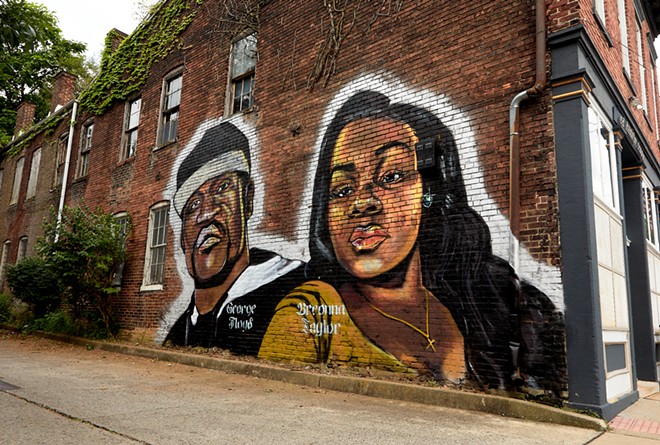 Erik Branch/The New York Times
A mural in Louisville, Ky., depicting George Floyd and Breonna Taylor, on June 9, 2020. Floyd died in police custody in Minneapolis in May, and Taylor was killed by the police in Louisville, using a no-knock warrant to enter her apartment with a battering ram, during a late-night drug investigation in March.
By Rukmini Callimachi
The New York Times Company

LOUISVILLE, Ky. — After months of protests that turned Breonna Taylor’s name into a national slogan against police violence, city officials agreed to pay her family $12 million and institute reforms aimed at preventing future deaths by officers.

The settlement in a wrongful-death lawsuit brought by the mother of Taylor, a young Black woman who was killed by white police officers in a botched raid in March, was expected to be announced Tuesday by her legal team and city officials.

Taylor, a 26-year-old emergency room technician, died after her boyfriend mistook police officers for an intruder, as they rammed in the door of her apartment after midnight to execute a search warrant. He fired his handgun, striking an officer, setting off a response in which a torrent of bullets sliced through Taylor’s apartment and two adjoining ones.

The top demand of the protesters who gather nightly in a downtown square has been that criminal charges be brought against the three white officers who shot into Taylor’s home. But because the officers were fired upon first, legal experts say their actions may be protected under Kentucky’s statute allowing police to use lethal force in self-defense. For that reason, they say it is unlikely that a criminal inquiry underway by the state’s attorney general will result in charges against at least two of the officers.

The same legal experts believe only a charge of wanton endangerment could be brought against a third officer, whom the police department fired, citing reckless conduct.

The results of the attorney general’s investigation are expected to be released soon.

Among the reforms are a requirement that commanding officers review and give written approval of all search warrants, a change that was instituted recently in Lexington, the second-largest town in Kentucky, and which has led to a dramatic drop in the riskiest raids, said Peter B. Kraska, a professor at Eastern Kentucky University who is an expert on police reform.

An early warning system will be adopted to flag officers with disciplinary problems.

And to promote better relations between the department and the community, officers will be encouraged to perform two hours of paid community service each week and will receive housing credits to encourage them to live in the neighborhoods they police, according to a summary provided by Sam Aguiar, one of the family’s lawyers.