Teeth for the Watchdog

The City Council, amid an outcry, delays its vote to strengthen civilian oversight of police. 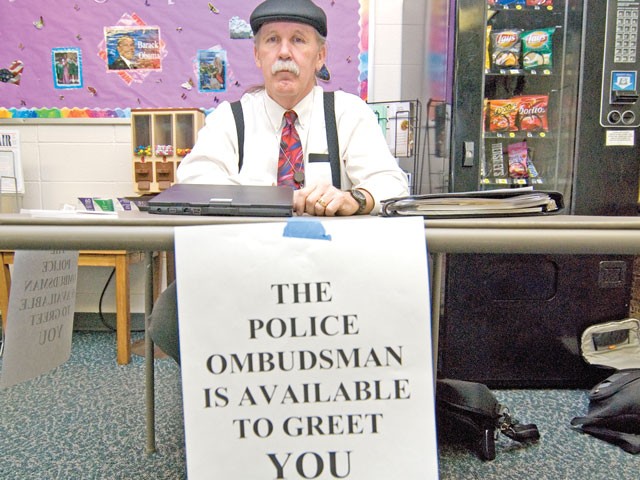 Tammy Marshall
He can shake our hands. But can he help us out?

Monday’s Spokane City Council meeting to discuss more robust powers for the Office of Police Ombudsman, a complaint-driven office that provides civilian oversight of police conduct, was nothing short of amazing.

Especially when the council voted 6-1 to defer for another month taking any action on launching an improved ordinance for the ombudsman.

It was an evening filled with revelations of secret memos, backroom deals and previously unheard stories of overzealous policing that, as one council member said, hushed a crowded room to where “you could hear a pin drop.”

The tales people told about their encounters with police — being Tasered or tackled or having guns drawn after something as apparently routine as making a left-turn without signaling — were riveting. And profoundly troubling for the people involved.

“Has anybody here ever been so scared that they pissed on theirselves? Anybody?” David Edwards, a 53-year-old African-American maintenance supervisor at the downtown Community Building, was telling his story about being pulled over by police on Martin Luther King Day. The two officers report Edwards failed to signal a left turn. Edwards insists that as a black man turning left in front of a police cruiser, he certainly did use his turn signals.

The incident, first related in The Inlander, became tense when, Edwards says, sunglasses fell from his glove box while he was reaching for insurance documents and the officers drew their weapons.

On Monday, standing before the council dais, Edwards revealed for the first time he was so scared he pissed his pants. He told the council how he filed a complaint with Spokane’s new ombudsman Tim Burns.

The result after several months? “I was sold out by Mr. Burns.”

Edwards held aloft a May 10 letter he received from Police Chief Anne Kirkpatrick announcing that his complaint was determined to be unfounded and thus dismissed. He was not contacted by Burns, has been unable to get a copy of his own complaint file despite several requests and says that he has no clear idea of what, exactly, was ever investigated.

It was a potent summation of the mood of the 23 people who testified, urging the council to vote now on an ordinance to grant more authority to the ombudsman. (Under the current ordinance, police Internal Affairs does the actual investigation into citizen complaints and Burns’ role is auditing their results and stamping the case ‘Complete’ if the IA probe has been fair and thorough.)

What the council would like, Councilman Jon Snyder tells The Inlander the day after the meeting, is the ability for the ombudsman office to make its own findings that complaints are founded or unfounded.

The reason that Snyder and other council members voted to defer the issue for a month is because the various drafts of such changes have not quite been vetted yet by the city’s legal staff — and have been kept secret in the meantime.

The crux, he says, comes down to balancing three issues — workplace conditions, public records access and police accountability — into an ordinance that allows the ombudsman room to navigate.

Strong labor and accountability laws are laudable, Snyder says, but can work at cross-purposes “when you mix them into the same stew.”

Mayor Mary Verner who, as a councilwoman, was an early advocate of police oversight, said Monday she favors review of the ombudsman ordinance.

“I think we have to revisit the ordinance periodically to make sure it’s working for us. We are funding an expensive office of police accountability for the purpose of assuring the citizens we do have civilian oversight of the police department,” Verner said outside the council chambers.

And on June 21, Snyder and other council members say, Spokane will have that assurance. This time for real, they say.