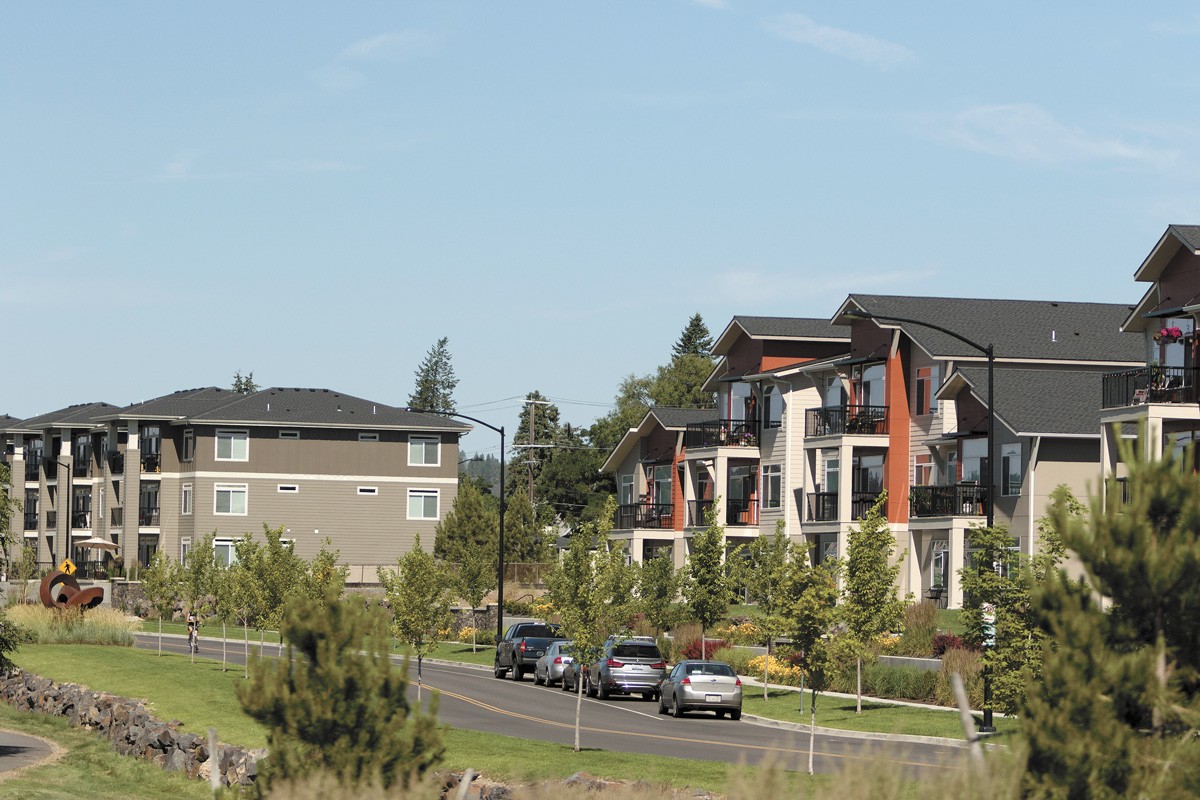 Young Kwak photo
Kendall Yards is praised for being a walkable neighborhood, but its townhomes and cottages are illegal to build in much of Spokane.

Ben Stuckart spent eight years as president of the Spokane City Council, often weathering the outrage and criticism slung by a frustrated public. But now that he's part of that frustrated public, he's the one slinging criticism at the council.

And so is Darin Watkins, government affairs director of the Spokane Association of Realtors, a group that poured money into defeating Stuckart's 2019 mayoral campaign.

"It is really, really, really bad," Watkins says about the housing crisis. "Our available inventory is at the lowest level in the entire country."

Housing prices have skyrocketed by over 60 percent in just five years, and availability has plummeted. Today, recent survey data says, only one apartment unit out of every 167 is vacant. That's half the level of vacancies we had four years ago, when the Inlander was warning about our extremely low vacancy rate.

And when the state's eviction moratorium ends, Stuckart and Watkins expect rent increases to explode.

"The rent increases that everybody sees, they're gonna crush them," Stuckart says. "I think we're going to be shocked by the increase in homelessness."

The problem is simple: We don't have nearly enough houses for the number of people who want them.

And while there have been reforms at both the city and state levels, Stuckart, Watkins and others argue that we need dramatic interventions to get more houses and apartments built and fast. They, and other local leaders we interviewed, floated 10 ideas:

"First, we should be declaring an emergency," Stuckart says.


He rattles off a list of things he thinks should be done immediately: expand the multifamily tax exemptions — incentives rewarding developers who build apartments in certain spots — to the entire city. Waive permit fees on all new housing. Set a seperate fast-tracked housing permitting system. And spend a ton of the federal COVID dollars on speeding up the development of low-income housing.

2. Fix or Ditch the "Centers and Corridors" plan

The plan was simple: Target new development around select "corridors" like North Monroe and "centers" like the South Perry and Garland District. But while businesses have thrived in some of these centers, the promised housing development hasn't arrived.


"For 25 years, through the Centers and Corridors process, we have not built one major development in the city — not one," Watkins says. "It's a failed process. It doesn't work."

Stuckart argues that the plan had potential, but says the surrounding zoning needed to be changed to allow for a lot more housing near these zones.

City Council President Breean Beggs, however, suggests that the city should broaden its map by basing density on bus stops instead. Under Beggs' idea, you'd be able to build higher and more closely packed buildings the closer you are to a bus stop. Major bus stops, like those on the high-frequency City Line route, would allow especially dense development, he proposes.

The Kendall Yards development, filled with rows of multistory townhomes and clusters of cottages, may not strike people as particularly radical, even if plopped down in the middle of suburbia. But Kendall Yards is the sort of design only made possible through special exceptions of local rules about yard size, lot size and parking availability.


"Yet you cannot build that in 85 percent of Spokane," Watkins says.

In 2018, the city loosened up on some of those regulations, but only within a quarter mile of the city's Centers and Corridors zones.

"What is happening in Spokane is we are building houses on large lots, and we build large apartment complexes, and we build nothing in between," Kendall Yards developer Jim Frank wrote in a paper for the Spokane Housing Summit earlier this year.

In the months ahead, Beggs expects the council to consider a variety of proposals to address the housing crisis "that includes the kind of Jim Frank gospel of making smaller lots and getting rid of some of the requirements for square footage," Beggs says.

4. Invite Mother-in-Law Units To Move In

Accessory dwelling units, or "mother-in-law apartments" as they're sometimes called, are a simple idea: a smaller home or apartment built in the yard or garage of a larger property.


But these dwellings remain illegal in many residential zones in Spokane. The quickest way to turn around the housing crisis, Beggs says, is to change that.

"And then, we should hire one to two city employees whose job it is to market them," Beggs says.

Those city staffers would develop a few prefab floor plans and streamline the permitting, utility hookup and bank loan processes, making it easy for any homeowner with a little extra money to put new homes on the market.

"You can do that throughout the city," Beggs says. "Then you get to the promise: You can live in every neighborhood, even Rockwood, affordably if you're willing to live in a small enough place."

Young Kwak photo
"Anytime you want to move quickly, and do something big it takes sacrifices," City Council President Breean Beggs says of the difficulty of addressing the housing crisis.

Similarly, "laneway housing" could take little-used backyards and turn them into spaces for second homes that open onto alleyways. City Councilman Michael Cathcart argues that this would also have the benefit of creating "much more vibrant and safe areas" by putting more eyes on the alleys.

6. Unpave the Parking Lots and Put Up Paradise

Spokane loves parking, but there's a huge invisible cost to dedicating our most valuable downtown real estate into asphalt rectangles instead of high rises filled with mixed-use residential and retail units.


"If even a small fraction of that land could be converted into denser housing, that would both help the housing crisis and add vitality to downtown," Washington state Sen. Majority Leader Andy Billig says.

Yet since the Davenport Grand Hotel opened downtown in 2015, very little parking space has been converted. Billig says it's a matter of using local policy to discourage parking lots and reward downtown housing.

7. Change the Definition of Single-Family Zones at the State Level

"Oregon Legislature Votes To Essentially Ban Single-Family Zoning," a 2019 NPR headline announced. That makes it sound like building a single-family home is now illegal in Oregon.


But that's not the case at all: It wasn't banning single-family homes, it was mandating that local governments allow other types of housing, too. Oregon's law requires all cities with more than 10,000 people to allow duplexes in single-family zones, and larger cities (or cities near Portland) to allow fourplexes.

Yet, so far, the Washington Legislature has declined to pass anything similar.

"The tension there is that there's also a strong sense of 'let local communities come up with solutions that work for that community,'" says Sen. Majority Leader Andy Billig, D-Spokane.

But at the local level, Beggs says, there's heavy resistance to allowing even more duplexes.

"There are people who think that would be crazy and there would be pitchforks," Beggs says. "There's always this question of how do you bring people along? Because the reality is, it wouldn't be bad."

8. Bring on the Statewide Density Incentives

If forcing cities to change their zoning codes wasn't politically possible, what about effectively paying them instead?


House Bill 1157, co-sponsored by Rep. Timm Ormsby, D-Spokane, during this year's legislative session would have rewarded cities that upzoned areas to allow for denser housing development, like building townhomes, fourplexes and apartment complexes. The premise: Whenever developers built the newly allowed types of housing units, the local cities would get back some of the taxes paid to the state when the homes get sold.

But while it passed out of the state House 93 to 4, it wasn't able to escape out of the Senate Committee before the Legislature closed up shop.

9. Finish Fixing up the Condo Law

"We're fighting a housing crisis, in my opinion, created by the state," says Spokane County Commissioner Al French. Beyond his frustrations over state regulations on development in unincorporated areas of the county, he says the state's condominium regulations still make it way too expensive to build affordable units.


He says the condo liability reforms the state passed in 2019 didn't go nearly far enough to make condominiums an attractive option for developers. That means that in cities like Spokane, it's almost impossible for low-income residents to find a home they can afford.

"You're denying people the right of home ownership, even if it's a condo, and robbing them of the opportunity to grow wealth," French says. "Shame on us, shame on the state, and shame on the Legislature."

"I'm worrying that their own personal perspective isn't opening their eyes to the suffering that's going on in the other 47 percent of the community."

But Stuckart, Watkins and even Cathcart share a sense of exasperation that, in their view, there doesn't seem to be any sense of urgency to fix the crisis. The city hasn't even hired an official planning director for three years, Stuckart points out.


At the state level, Billig can point to the $900 million in emergency rental assistance for tenants and landlords. And Beggs cites the city's recent efforts — like sweetening the multifamily tax exemption incentives and levying a local sales tax to fund affordable housing — as well as its desire to implement some suggestions in the city's recently released "Housing Action Plan."

But at the same time, Watkins can point to housing development projects that the City Council has rejected, even in recent months.

"If you're like every member of their council right now that owns their own homes, they have stable housing costs," he says. "I'm worrying that their own personal perspective isn't opening their eyes to the suffering that's going on in the other 47 percent of the community."

But while Beggs disagrees with that kind of assessment of the City Council, he agrees about the underlying issue.

"It's a tale of two cities — and a big portion of the city's in crisis," Beggs says.

The challenge, he says, is that the folks who wield the most political and economic power aren't in that portion. ♦