By Samantha Wohlfeil and Wilson Criscione 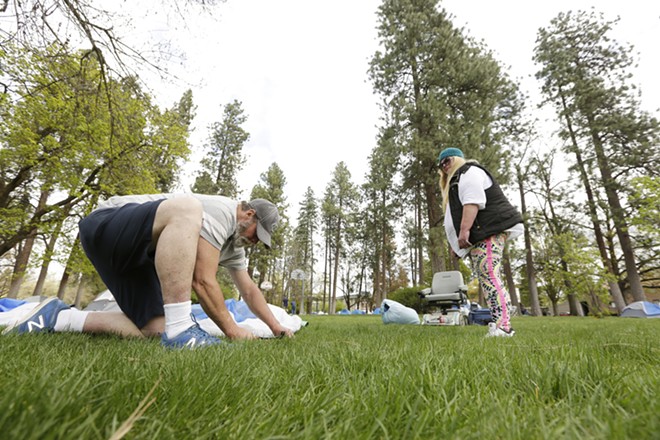 Shannon Jones tries to stick the pole in the ground, but her tent keeps blowing away in the wind. Surrounding her at Spokane's Coeur d'Alene Park on Thursday, dozens of bright blue tents have already gone up. Workers carry in blankets and sleeping mats. Onlookers stand on their balconies and watch with crossed arms.

Within hours, a tent city had formed in Spokane after about 100 people staying at shelters were told by shelter operator Jewels Helping Hands, founded by Julie Garcia, that they had to leave today. They went to either Coeur d'Alene Park in Browne's Addition or nearby People's Park with all their belongings and tents they'd been given by Jewels, thinking they'd lost the little shelter they had.

"I was homeless, but I had a place to come home to," she says. "Now they took a home right from underneath us."

Homeless individuals like Jones were caught in the crossfire Thursday between the city and Jewels Helping Hands. City spokesman Brian Coddington says Jewels breached its contract by telling people to leave their shelter space before their contract was set to expire at 11:59 pm tonight, and the city and regional partners had another shelter operator, the Guardians Foundation, ready to go. But Garcia says Jewels was never told that Guardians would take over, so they told guests they had to leave both of their shelter spaces tonight.

The result was that those who are homeless got mixed messages about where they're allowed to sleep tonight.

"Our expectation was that the warming center contracts would be fulfilled and unfortunately what happened today was it was not. Jewels kicked out residents of the Cannon Street site and their side of the library," Coddington says, "in violation of their contract."


Garcia provided to the Inlander a Wednesday email from the city that states Jewels wasn't eligible for further funding consideration due to an open investigation. "The City has recently been contacted by multiple parties with legal, civil, and contractual allegations that have risen to the level of being investigated," the email says. It said doors will close to patrons starting May 1.

Contrary to what homeless individuals were told, Jewels' portion of the emergency shelter at the downtown Spokane Public Library, which allows for social distancing during the coronavirus outbreak, will still be open tonight — only without Jewels running it.

Instead, the Guardians Foundation, already embroiled in a feud with Jewels Helping Hands, could take over shelter operation of Cannon Street and part of the library, though they had only anticipated taking over the library space until today. That work was approved by a regional COVID-19 response group made up of the regional health district, the city of Spokane, Spokane County and Spokane Valley, Coddington says.

Guardians founder Mike Shaw says the organization has already been operating a 100-bed hospital space for people who might be showing symptoms, and answered a call for proposals from organizations needed to run shelter space. Coddington says the regional group forwarded five organizations for approval last night, and Dr. Bob Lutz, Spokane Regional Health District health officer, had approved of the plans today. The plan is to find other locations for those shelters in the next few weeks.

But Jewels has informed the city that they will use the 14 days their contract gives them to move their property out of the Cannon Street shelter, meaning homeless individuals won't be able to stay there during that time.

"We have six months' worth of items for an entire building," Garcia says.

Originally, the plan was for the Cannon Street warming center to be done operating at the end of the day, with Jewels needing to get patrons out by 10 am Friday, May 1, Coddington says. Jewels would then have 14 days to remove the supplies and furniture inside.

The Guardians had planned to take over just the library space that Jewels was staffing at midnight, Shaw says.

But with the sudden confusion among so many in the homeless community, the city asked the Guardians to operate the Cannon site in addition to the library.

Shaw says the plan is to be open and ready to welcome folks at the library by about 6 pm.

But it was unclear what would happen come Thursday night with the Cannon site.

When asked whether the city would enforce anti-camping laws to get people back into the shelters, Coddington says, "There’s a curfew at the parks at 10 in the evening so we will make sure that people are directed to the proper resources."

Garcia tells the Inlander that Jewels wasn't informed that the Guardians would be running the shelter, and that she heard it first from a reporter on Thursday. She says "we specifically asked the city, 'What are we going to do,' and they said they'll let me know when they have a plan."

"All that needed to be said to us was, 'We're going to get somebody else,'" Garcia says.

But the city says that Jewels has known since signing the warming shelter contract that April 30 would be the last day of operations for their contract. An email Garcia forwarded that was sent by Tim Sigler, director of the city's Community, Housing and Human Services department on Wednesday, noted that they needed to have patrons out on May 1.

It was expected that the roughly 35 people staying at the Cannon site could be taken in at other shelters throughout the system, Coddington says.

After Jewels removed their belongings, the shelter was slated to be renovated and turned into a day shelter, he says.

As for the transition at the library, Shaw says he hadn't talked to Jewels about what that would look like.

"It’s the city’s job to communicate with the vendor, not mine, and I’m in litigation with the vendor about another matter," Shaw says. "I know some of the behaviors of the operator are questionable, to say the least. I can't imagine why someone would just drive people out of shelters."


But Garcia insists that Jewels didn't know until yesterday that they would need to get people out, despite the language of the contract. She says she expected more notice from the city about whether the contract would be renewed.

"If you know you’re not going to extend a contract, maybe give at least three days' notice or something," Garcia says.

Coddington reiterated that Jewels' contract was up on April 30, and the operator should've known that.

The people who were staying in the Cannon shelter, meanwhile, feel like they're being jerked around.

"We're just trying to f—-ing survive out here," says Andrew Shatzer, as he throws his sleeping bag in his tent.