Scratch-made is the standard when it comes to fine dining, yet the construction of some dishes can require a heavier-than-usual lift of ingredients, preparation or technique. With a whopping 31 ingredients and several days of prep and processing just for the sauce, Terraza Waterfront Café's chicken en mole negro is just such a dish.

There are five parts to this $24 entree: sauce, chicken, rice and beans, slaw, and a garnish of fried plantains.

The superstar of the dish is the mole (pronounced mo-LAY), which translates to sauce in Nahuatl, an Aztecan language native to southern Mexico and parts of Central America. And like salsas or curries, this Mexican mother sauce follows a few basic rules like using chilis, fruits and nuts, yet varies widely across Mexico.

"Mole is quite ubiquitous as a concept but can be as unique and personal as a last name to families in Mexico and central America," says Terraza Executive Chef Bjorn Thompson.

The restaurant's mole recipe is inspired by owner Doug Johnson's heritage and Thompson's travels in Mexico, as well as cooking among people from all over Latin America.

Mole negro hails from the Oaxacan and Puebla regions of Mexico and is characterized by its velvety, thick texture and dark color, which owes more to the toasted chilis than the inclusion of chocolate. Indeed, chilis are an essential ingredient in mole, and Terraza uses a variety.

"Each type of chili has its own flavor profile," Thompson says. "Some are more fruity, some more earthy, and some add heat," he says. He uses negro, pasilla, ancho and guajillo chilis, toasting them to bring out their flavor.

"Think of toast versus bread," says Thompson, who rehydrates both the toasted chilis and the fruit component of the dish, raisins, by soaking them in Terraza's Bolivian blend coffee.

Next up are nuts and seeds, which, when toasted and pureed, give mole a smooth, rich texture and "buttery mouthfeel without the use of dairy," says Thompson. 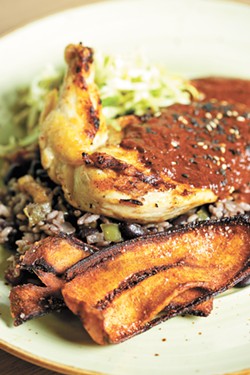 Breadcrumbs are made from telera bread, leftover from Terraza's sandwiches and hamburguesa, which also thickens the sauce.

Into the stock made from vegetable scraps goes tomato, onion, tomatillo, garlic and plantain, plus herbs — allspice berries, cinnamon, cloves, cumin seed, fresh oregano, thyme and marjoram — and all the other ingredients, along with some Mexican chocolate.

Everything gets simmered for a few hours, then pulled from the heat and allowed to cool enough to begin the blending process.

"With the small space that we have in our kitchen and no huge industrial equipment, we use two Vita Prep blenders, and sometimes they overheat in the process and have to be cooled down for a couple hours before they will function again," says Thompson, who makes the mole negro in five-gallon batches.

A bit of kosher salt and sugar are added at the very end, says Thompson, whose two rules in the kitchen are to taste and season everything.

Mole can be paired with any number of other dishes, and Terraza's chicken was chosen to showcase the sauce "because it is the least obtrusive and also one of the most commonly used" in Mexican cooking, Thompson says.

Terraza elevates the humble chicken through its sourcing of free-range poultry and by preparation. The airline cut of the breast with the first wing joint still attached makes for a moister dish that's further enhanced through tenderizing and brining for 24 hours in a mixture of water, salt, apple cider vinegar and agave.

Finally, a side of slaw adds a fresh, brightness to the dish via crunchy jicama, cilantro and green cabbage. The dressing features pineapple juice, shallots, Dijon mustard and olive oil plus hoja santa or holy leaf, which Thompson describes as having notes of mint, basil and slight eucalyptus.

Response so far to the chicken en mole has been good, including with diners familiar with Latin American cuisine.

Since opening this spring, Terraza has experienced similar challenges as other restaurants, like specialty ingredient sourcing. However, anticipating that its relatively new staff might be unfamiliar with Central and South American food, management has also focused on training and building a strong team.

"We have had many compliments on our staff, and I thoroughly believe that we retain them because of how we treat them," Thompson says. ♦