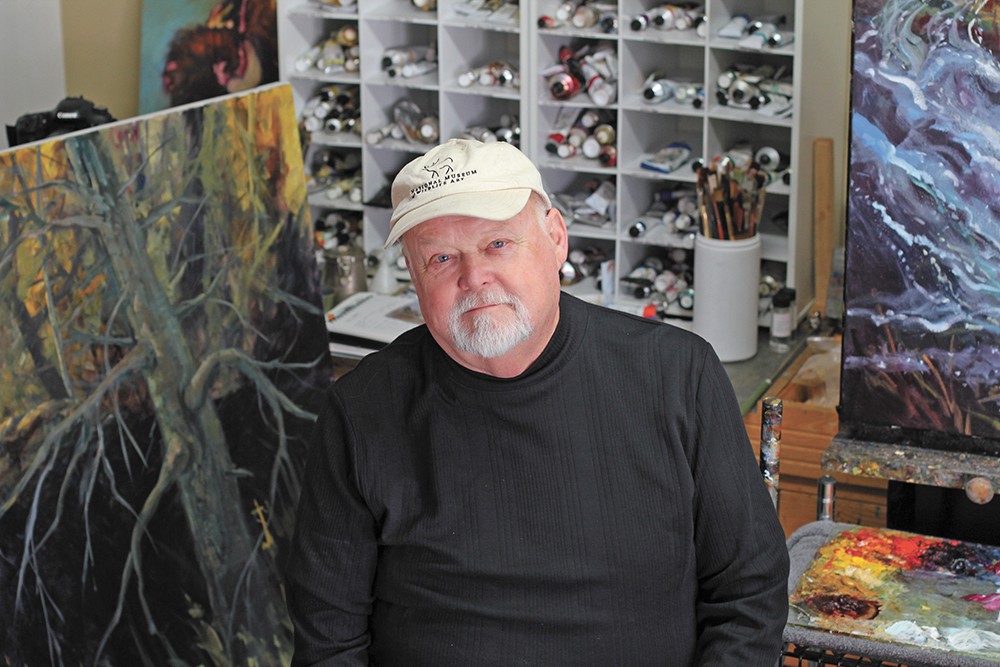 Terry Lee might be to Coeur d'Alene what inventive artists like the late Harold Balazs was to Spokane — shaping the community through public sculpture, yet just as skilled in other mediums, particularly painting. Like Balazs, Lee understands that while financial success reflects a keen business sense, personal success can be measured in relation to community. Sculptor, painter, businessman, mentor — it all comes together in Lee's Hayden-area studio.

Situated near Coeur d'Alene Airport/Pappy Boyington Field, Lee's studio is, like the man himself, multifaceted. Part of it is in the house, part is in the shop and much of it is in continual flux.

Inside his modest home, half his living room is given over to painting, where he works surrounded by books and brushes at an easel capable of holding canvasses several feet wide. Around him are both paintings and sculptures from his 26 years making art in North Idaho.

"Art was not an interest; it was a passion," says Lee, who was born and raised in Coeur d'Alene, left for seven years and returned in 1994 with a plan to make a living from art.

His painting studio reflects a dynamic business. Some artworks are being readied for shipping out, while others will linger on walls, counters and tables a while longer. Maybe they'll appear in one of Lee's numerous gallery representations in Montana, Wyoming, New Mexico or Utah, or be sent to one of a handful of shows in which he regularly participates.

Outside his home is a gargantuan, asphalt-paved driveway that accommodates numerous vehicles, from the oversized pickup truck Lee uses to haul heavy bronze sculptures, to visitors' cars parked there during Lee's participation in the annual Coeur d'Alene Arts & Culture Alliance Artist Studio Tour.

Lee also gets visitors pursuing their personal artistic journeys. Some arrive to take a class with Lee or they might be teaching-artists to whom he lends space. He also opens his studio to skill-seekers during weekly open studio sessions. For a nominal donation to cover the cost of the model, people can practice figure drawing one week and facial portraiture another.

Lee began the open sessions in 1994, before moving to Hayden, when he had a studio on family land near Interstate 90. He'd set it up shortly after returning from San Diego where he made his first forays into painting.

Being there spurred his interest, says Lee. "I was exposed to really good galleries and the [San Diego] Museum," he says.

Lee started painting what he saw — Del Mar racetrack horses, the California coast — and taught himself what he could. He developed an eye for color, gravitating towards artists like John Asaro, Dan McCaw and Joaquín Sorolla y Bastida, all of whom have a characteristically loose style, akin to impressionism.

He sold some work, gained experience and decided art was his thing.

"I call it the 'step in front of the train' approach," he says.

At age 71, Lee has more than found his stride. In 2018 he was named Safari Club International artist of the year for his massive and magnificent paintings of wildlife. Lee has traveled to Africa twice and is in the midst of planning a third trip.

Visitors to his studio can see works in progress, which for a large-scale bronze usually involves making a small, clay maquette. Then he scales up the figure, adding and refining details. The finished piece is hauled to a foundry, where it will be cut apart, cast in bronze, put back together and readied for installation.

Lately he's been busy with yet another figure for Coeur d'Alene's McEuen Park: a large, life-sized female suffragist to commemorate the hundredth anniversary of the constitutional amendment securing women the right to vote. When she is installed, the statue will stand alongside other pieces he created in a similar vein: The Working Man (2014), Idaho Farmer (2017) and The Idaho Lumberjack (2019).

"Coeur d'Alene had four active mills here when I was growing up," says Lee, who says he can't think of a better place than Coeur d'Alene's lakeside park to commemorate local history.

The original print version of this article was headlined "Multifaceted Artist"

Artist Tiffany Patterson on the challenges of making art amid a pandemic, and how galleries going online increases art access