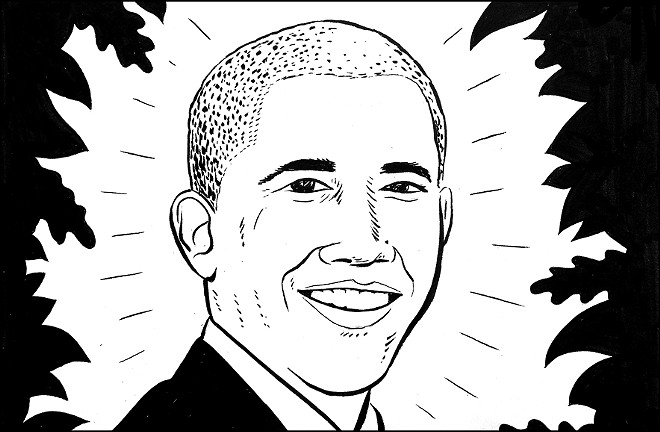 the keynote address at the 2004 Democratic National Convention, delivered by a senator from Illinois with a "funny" name to commentators: Barack Hussein Obama.
click to enlarge

"Now even as we speak, there are those who are preparing to divide us, the spin masters and negative ad peddlers who embrace the politics of anything goes," he declared to tens of millions of galvanized listeners. "Well, I say to them tonight, there's not a liberal America and a conservative America; there's the United States of America."

A star was born. Inspired by his message, I volunteered for his 2008 presidential campaign. I wanted our country to move beyond the stagnating dorm-room culture-war arguments from the 1960s which flowed downstream to my generation. (Bush, Clinton, Bush, and in 2008, Clinton again.) Obama represented a break from the past. In making calls and knocking on doors, I was freshly engaging in the political process, because the power to do right and make our world better mattered.

With an energetic, groundbreaking organizing strategy, an improbable candidacy turned to victory. Hope and change was here — the first black President of the United States, a beautiful embodiment of the American dream made history.

Now, as he packs up the White House, how will history judge Barack Obama?

The Affordable Care Act, which is, as the inimitable Vice President Joe Biden said, a "big f---ing deal," passed. It saved lives, with more than 20 million Americans gaining health insurance coverage. Globally, Obama was a key leader in the Paris climate agreement with 194 other countries, a turning point in climate policy intended to phase out the use of fossil fuels. He jump-started the economy after inheriting the worst recession since the Great Depression, and on matters of national security, we were safer — we didn't go to war gratuitously, which isn't faint praise when you think of the alternatives today. He and First Lady Michelle Obama brought a Kennedyesque air of dignity and gracefulness, without scandal. They invited Beyoncé to the White House, instead of Kid Rock.

But no politician is perfect, and President Obama is no exception. He should be held accountable for his failings: He took too long to act on the Dakota Access Pipeline, those who crashed Wall Street didn't pay the price for the financial crisis, and we hardly batted an eye at ongoing tragedy in Syria, to name three.

But to say that Obama's legacy is the election of Donald Trump is a lie.

What happened is that our politics finally caught up to our culture, with the election of an authoritarian reality television star who is even more fraudulent than the fake news he personifies. Another story emerged that took a foundational shift during Obama's presidency: The dawning of a post-truth age. The signs were there, from Sarah Palin's celebrity to the Tea Party insurgency, and even trickle-down effects like the Republican coup in the Washington State Senate, as moderates and extremists joined hands to subvert budget negotiations, ensuring a special session. Or flirting with government shutdowns. The old rules didn't apply, as democracy was repeatedly hit below the belt. Trump, controlled by a team of swamp monsters, was the logical conclusion of these tactics.

Democrats are now going to have to think like Republicans, and fight the "modern" GOP's regressive policies instead of fighting among themselves. Rather than going high when the opposition goes low, they're going to have to go lower — and hit back harder. Preserving Obama's legacy demands that this be the case.

The currents of lies, hate, war and greed, and threats to basic human rights in the name of economic pain and fear, will be pushed back, because President Obama activated people like me who won't ever give up — the ongoing struggle for hope and change, especially when things are at their worst, will never die. It's tough work, and it's why I do it.

And for that, there's only one thing left to say: Thanks, Obama.♦

An apocalyptic book series shows the type of society Rep. Matt Shea and his allies dream of rebuilding

How cannabis continues to split rural communities in the Inland Northwest

If a tree falls in Sandpoint... it makes for a party

Readers respond to our story on Cathy McMorris Rodgers' strategy in 2018; Riverfront high-rises