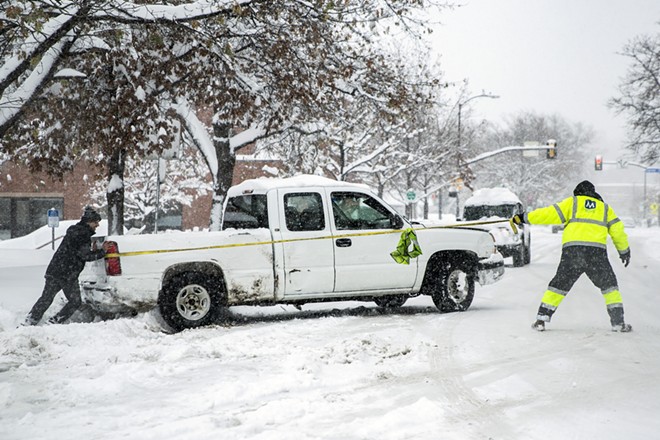 Chet Strange/The New York Times
Men work to remove a truck from a snow drift in Boulder, Colo., Nov. 26, 2019. A powerful storm is cutting across the country from Colorado to the Great Lakes, disrupting flights and dumping snow.
By Vanessa Swales
The New York Times Company

Thanksgiving travel is a complicated dance at the best of times, with more than 55 million people expected to hit the roads or take to the skies this holiday week.

To make matters worse, a powerful storm was streaking across the center of the country Tuesday, from Colorado to the Great Lakes, threatening to blanket a handful of states with heavy snow, disrupting flights and making driving difficult. Parts of Colorado have already been buried under as much as 30 inches of snow. Interstate 70, a major east-west highway, was closed in both directions near Denver.

At the same time, the Northwest has been put on notice that a fast-approaching “bomb cyclone” is blowing in from the Pacific Ocean and could hit Tuesday afternoon.

Some coastal areas in Northern California and Oregon should brace for “stronger than hurricane-force winds,” the National Weather Service said, warning that the high winds could bring down power lines, rip branches from trees and threaten to push 18-wheelers and RVs off the roads.

The foul weather was already scrambling travel plans. As much as 11 inches of snow had fallen in Denver by Tuesday afternoon, with almost 500 flights canceled to and from Denver International Airport. A number of airlines, including American, Southwest and Delta, have issued travel waivers, allowing passengers to change their flights without incurring fees.

Although a late November snowstorm is no surprise in the Rockies, the Plains and the Midwest, the severity of this one is notable. The Minneapolis-St. Paul metropolitan area could see its biggest November snowfall in nearly a decade, The Associated Press reported.

Areas in the Upper Peninsula of Michigan are expected to receive between 6 and 12 inches of snow Tuesday evening. Cheyenne, Wyoming, has gotten about a foot of snow in 18 hours.

A blizzard warning was posted for the northeastern plains of Colorado, with the Weather Service predicting zero to nearly zero visibility, though the storm was expected to leave the state Tuesday afternoon. The Nebraska Transportation Department notified travelers Tuesday that miles of highways had been blocked because of severe weather conditions.

A very strong jet stream was forecast to drive the development of a powerful storm along the Oregon and Northern California coasts, with winds expected to reach 100 mph in places — well above hurricane force. The storm was expected to hit in the afternoon.