The A Thousand Things to Talk About podcast seeks to feed your brain with bite-sized, research-packed daily episodes on random questions 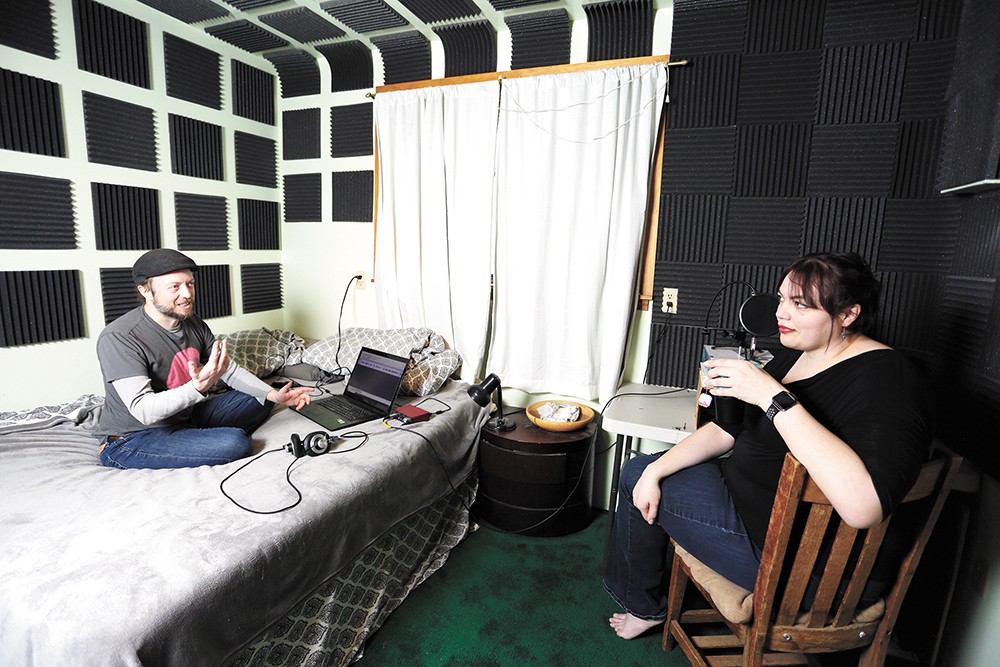 Andrea Parrish, a 34-year-old Otis Orchards resident, grew bored back in 2013 with people's repetitive posts in her news feed — all those posts about people's meals — and decided to start asking daily questions on Facebook to start a discussion.

"Essentially, I was sick of talking about the same thing every single day," she says. "None of it was really conversation. And I was and am an old-school debater. I did high school and college speech and debate."

After getting an initial great response with active and thoughtful online conversation, she kept doing it, and at one point she began archiving all of the questions she posted. Now, those posts fuel a novel project: the A Thousand Things to Talk About podcast, where she answers those questions with heavily researched two-to-four-minute episodes five days a week, aided by the technical skills of Jeremiah Puhek, the show's audio-production wizard.

"This was kind of the natural extension of that project," she says. "'Hey, I have this giant database of questions, we want to do something with it, and I have a habit of researching everything anyway so we might as well do something with that.'"

The daily episodes cover topics ranging from the emotional and psychological impact of being a hardcore sports fan to "what imaginary friends did you have as a kid?" And while the shows may be short, they are not lacking in substance: The production quality and the number of studies Parrish breaks down in a given episode are impressive. (The first episode aired in early 2016.)

"This is like her superpower: that she can take doctoral-level research and compress [it] to four minutes," Puhek says of Parrish.

Neither Parrish nor Puhek originally set out to publish a podcast: Parrish has run a candy business and been a communications director while Puhek is an electronics engineering technician with a background in radio production. ("I've been climbing radio towers for 20 years," he says.) But now, they're teaching podcasting classes at Spark Central in Spokane.

And while they work out of a guest room retrofitted into a studio at Parrish's house (they say it only cost a couple hundred bucks), Puhek's expertise comes through on the show, which could sit alongside BBC's Newshour in terms of production quality. "A lot of people listen to it and they say, 'This sounds like something from NPR'," he says.

But they still stand out: "We're so short," says Puhek. "There's very few other podcasts that are under 10 minutes."

The show garners an estimated 50,000-56,0000 downloads every 90 days. And while their largest audience is in the United States, their fanbase is global, ranging from Turkey to Australia, from English language learners to teachers and curious discussion groups.

"We've got a bunch of listeners in Australia who just use it as their 'Hey, let's just chat about this' thing," Parrish says.

Part of the impetus for the project is also to help people be more willing to ask questions, engage in discussion, and cultivate intellectually substantive community, Parrish says. She points to studies she's read that indicate that asking questions has positive social impacts, such as making curious people "more liked."

With such a positive reception built up over the years, the duo are going to keep at it, though the future is somewhat uncertain: They both have day jobs, are doing this on their own dime and don't quite have the pull in the market to attract either local or national advertisers. Besides, Puhek notes, ads would likely double the length of their daily episodes.

Parrish says that if they get more Patreon subscribers, they may start doing "deep dive" episodes that clock in at 10 to 15 minutes more regularly. (Currently, they only do these occasionally when time permits.)

But next steps are still largely an open-ended question.

"It's kind of up in the air and that's both exciting and really scary," she says. ♦

The original print version of this article was headlined "Daily Probes"