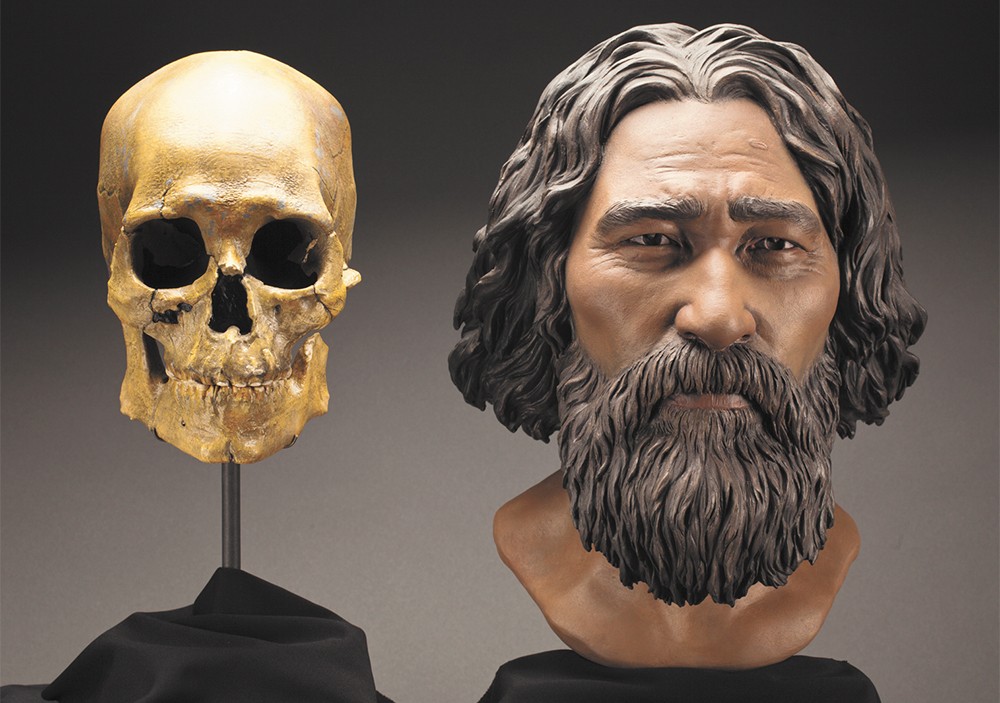 Smithsonian
A recreation of the Kennewick Man.

Jackie Cook's job is to rebury the dead.

When the ancient remains of her tribe's ancestors are uncovered in the Columbia Plateau, she's called upon to return what's left of their bodies to the earth. Although they may have died thousands of years ago, their reburial ceremonies are always bittersweet.

In her 11-year career as a repatriation specialist for the Confederated Tribes of the Colville Reservation in Nespelem, there's one ancestor she's still waiting to bury: Kennewick Man. Inadvertently discovered 18 years ago along the banks of the Columbia River by a pair of college students, the controversial skeleton ignited a nine-year legal battle between scientists and a coalition of Northwest tribes, including the Colville. The tribes unsuccessfully fought for the right to rebury him under the Native American Graves Protection and Repatriation Act after the court ruled they had failed to prove that Kennewick Man was related to any of the modern-day tribes.

The controversy is ongoing. A new book published earlier this month, the highly anticipated, 680-page Kennewick Man: The Scientific Investigation of an Ancient American Skeleton, argues that the Ancient One wasn't from the Columbia River Valley as the tribes assert. The textbook-sized volume, which features contributions from more than five dozen authors, researchers, photographers and editors, is the most comprehensive account of Kennewick Man's remains to date.

Smithsonian
The Kennewick Man's remains are kept in a vault at the University of Washington.

In the tome, the editors theorize that Kennewick Man hailed from the northwest coast of North America — possibly from present-day Alaska or the Aleutian Islands — or even as far away as Asia. A relative of modern-day Polynesians, he was 5-foot-7, roughly 160 pounds and right-handed, with several broken ribs, two small fractures in his skull, a spear point stuck in his hip, and a bad shoulder from a lifetime of slinging spears into the water to hunt for seals. He died more than 9,000 years ago, around age 40. He was buried with dignity and care in a two-and-half-foot-deep grave.

What he wasn't, they say, was Native American.

Years later after the court battle ended, Cook, 60, disagrees. She works in the repository of the tribe's history and archeology program, a small 1970s-era building that used to be an old smoke shop. Inside, hundreds of thousands of artifacts — arrowheads, stone tools and "debitage," the flakes left over from paleolithic tool-making — are carefully catalogued in sealable plastic bags and stowed in rows upon rows of bins on space-saving movable shelves. Although their histories have been passed down through oral traditions, she says their wealth of knowledge about the past is equally as valid as that of the scientists. "The Ancient One," as he's often referred to by the tribes, is one of them.

"I want people to understand that the tribes know their history; they know their history well," she says. "This wasn't an empty landscape for anybody. There were communities here. There were people here. ... Having all that knowledge, you have to have help. You can't do this by yourself."

The tribes could still reopen their case over Kennewick Man, according to the U.S. Army Corps of Engineers, which owns the skeleton, and depending on the evidence the outcome could change. Scientists in Copenhagen are currently conducting DNA testing on the remains, which may link Kennewick Man to modern-day Native Americans. Although his skeleton is still secured in a vault at the University of Washington's Burke Museum, Cook hopes that one day, she'll have the chance to return his remains to his grave.

"The way we believe is that once a body goes into the ground, that's where it's supposed to stay forever and ever," Cook says. "We have a covenant with the ancestors to take care of them.