The Art of Meditation

Zentangle offers relaxation and focus through pen and paper 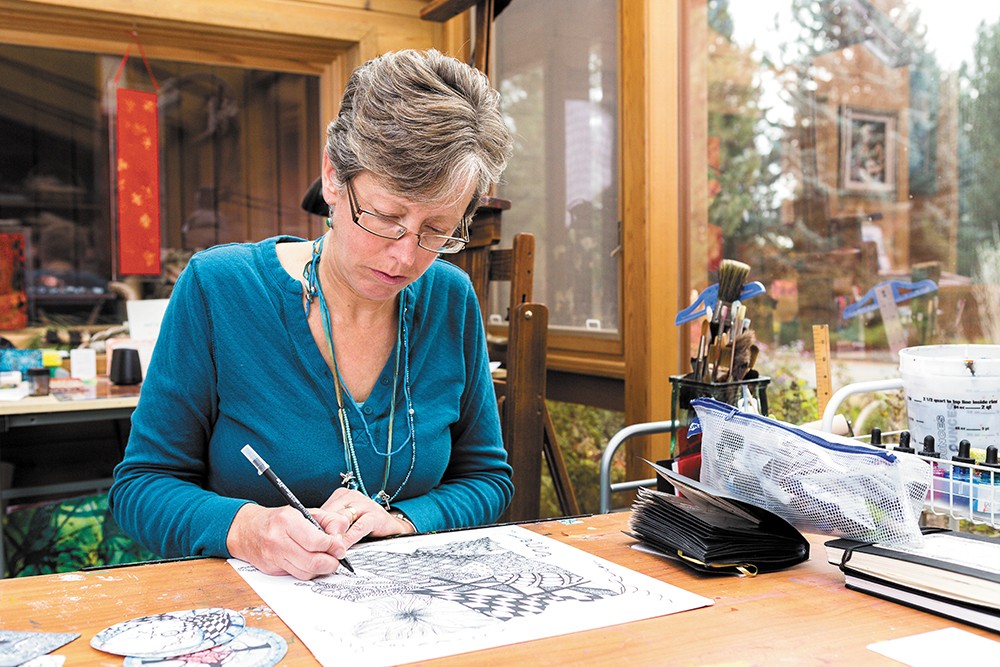 The couches are thick and pillowy: standing up isn't a simple shift-and-hoist movement; it's a protracted process of self-extraction. Classical music — recognizable pieces by Debussy, Satie and Pachelbel — plays quietly in the background. The lights are low. It is, in a word, relaxed. But tonight the small group gathered here won't be drifting into a soothing, otherworldly plane with hypnotic ohms, or contorting our bodies into transcendental poses named after animals. We will be doodling.

Here in this basement room of the New Moon Family Wellness Center, however, "doodling" is a loaded term. This is Zentangle, which takes an activity more commonly associated with notebook margins and boredom and transforms it into a structured, meditative, accessible form of art.

Zentangle got its start in 2003 when, as the movement's lore runs, Rick Roberts tried to get the attention of his wife Maria Thomas, who was absorbed in her drawing of an illuminated manuscript. So rapt was she that he couldn't help but highlight the parallels between her drawing and his Buddhist meditation. Out of this moment came the artistic method that Roberts and Thomas would champion under the name Zentangle.

As is often the case, a cottage industry quickly sprang up around it. The movement acquired its own jargon — a square sheet of drawing paper is a "tile," for example, and a line drawn from one point to another is a "string" — as well as a trademark. As its commercial arm became the focus of increasing debate, proponents of Zentangle worked harder to distance the activity from mere doodling.

"My feeling is that if a person is making art of any sort and it makes them feel good, who cares what it is called or what it looks like?" says Loretta West. "My personal experience is that with the repetitive nature of drawing tangles, that sense of relaxed focus, which brings inner peace, is achieved more quickly when I practice Zentangle than any other art form I've tried."

West discovered Zentangle about two years ago through a friend. Her father had recently passed away, and though she was already an artist and art teacher, Zentangle offered a unique combination of therapeutic solace and creative outlet. In 2012, following a coincidental chain of events she might consider kismet, West made a pilgrimage eastward to complete an intensive training course and become a Certified Zentangle Teacher.

With the CZT designation behind her name, West has held roughly one class per month in the Spokane and Coeur d'Alene area since then. On this evening, not counting myself as a participatory observer, she is instructing a class of five female first-time Zentanglers. Although they are more or less in the same late-middle-age demographic, each cites a slightly different reason for attending, whether it's curiosity, creativity, relaxation, or a hard-to-articulate amalgam thereof.

West offers each of us the choice of black or white paper and distributes a corresponding Zentangle-branded pouch that contains similarly branded materials: a pen, a pencil, a soapstone, some tiles. And then, to the swaying soundtrack of Pachelbel's Canon, she methodically instructs us how to decorate our roughly 4-inch-by-4-inch tile like a New Age Bob Ross. We draw four dots. We connect those dots with strings, dividing the tile into quadrants. We draw patterns — with names like "river" or "verve" — in each quadrant. Each step, she emphasizes, is a discretionary command, a mere suggestion at the mercy of our personal whim.

As West runs through the sequence, her bracelet tinkling with each stroke, she talks. She relates the history of Zentangle. She explains how drawing can be broken down into five basic symbols, namely, • O C S —. Perhaps referring to widely cited studies in Applied Cognitive Psychology and Science, she also notes the putative scientific advantages of doodling, such as improved memory and better grasp of intricate concepts.

In purely anecdotal, unscientific terms, Zentangle's vague claims are borne out by the end of our nearly two-hour session. The woman who arrived fidgety and high-strung has settled down, immersed in sketching her designs. The woman who said she hoped Zentangle would help reignite her creative spark is tranquilly admiring the patterns she's created.

"When I was first introduced to it, I was a little bit skeptical," says Candy Thomsen, a former student of West's, "but it was a very short period of skepticism. I'm a fine artist, and Zentangle opens up my creative blocks because there's no preconceived notions about what it's supposed to look like. It's also a way of meditating without having to sit and close your eyes."

Despite Thomsen's shared professional background with West, not all dedicated Zentanglers are artists. Retired excavator Larry Cook admits that he's "always been a doodler" but, given his former career, says he's naturally "partial to rocks." He began Zentangle in earnest about two years ago after coming across elaborately decorated rocks on Pinterest. Since taking area classes with West, he now delights in applying "hundreds of different patterns" on his preferred medium and employs Zentangle methods in craft projects with his grandchildren.

"It's for everybody," West says. "There are a number of ways of approaching [Zentangle], but one of them is to have a scaffolding, which is similar to classical drawing. By breaking things down and giving you something to hang the design on, it's easier to learn." The apparent complexity of a completed Zentangle belies its simplicity, which makes it "a metaphor for life."

"Zentangle is all about the process, never about the end product," she says. "Any problem that you have, you can distill it by breaking it down." ♦