The Best Summer Ever! — Theater 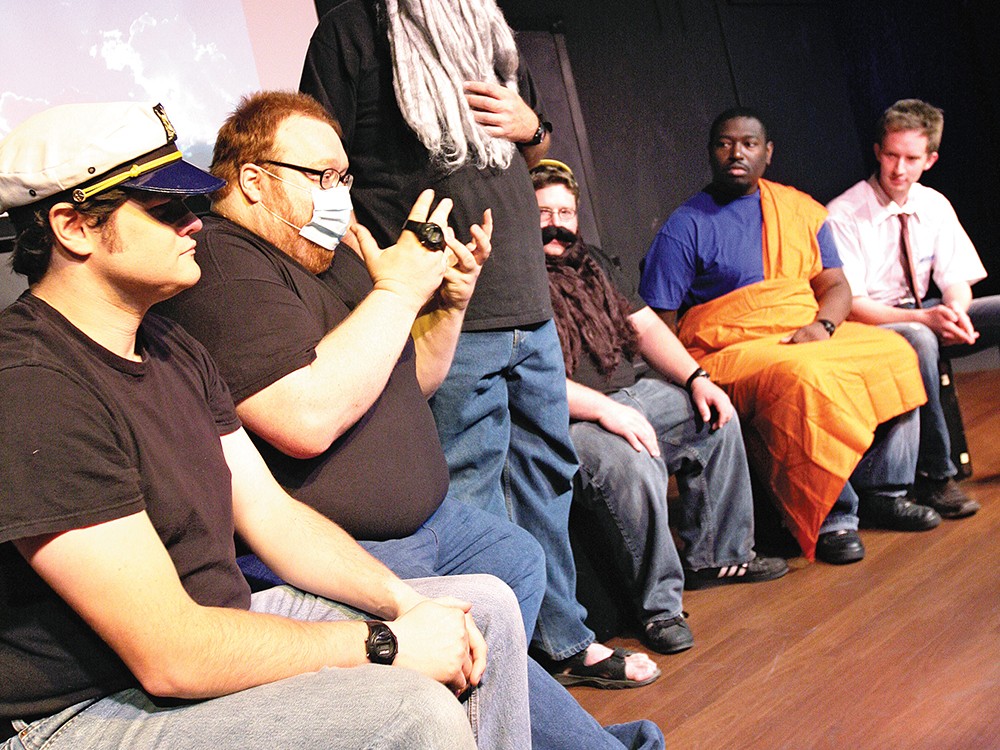 TAKE A VACATION - FROM YOUR COMFORT ZONE

Live theater is best, we’re often told, when it shakes us out of our complacency. This summer, individual theater groups and venues across the Inland Northwest seem especially eager to help audiences pry themselves out of their comfort zones with a string of provocative, absurd or unconventional productions. The first is The Marriage of Bette and Boo at Ignite!, which shows weekends until June 30. Written by Christopher Durang and rooted in his childhood experiences in a devout Roman Catholic household, this award-winning play offers snapshots of the grotesqueries lurking beneath the veneer of the middle-class American family through a series of farcical interconnected scenes. Sure, other dark comedies have pulled the veil from our romanticized notions of family life, but how many of them have stillbirths as a running joke?

On the first Friday of every month, the Blue Door Theatre stages Short Stacks. This is experimental improv — new material as well as old ideas that need refining — peppered with stand-up comedy, music and anything else that might fall under that umbrella. Or doesn’t quite. Tickets are just $5, so it’s low-risk, and shows begin at the kid-unfriendly hour of 10 pm to reflect the fact that they might get a bit risqué. On the last two weekends in July, Spokane Stage Left will put on David Hare’s Stuff Happens, a “history play” that takes its name from one of Donald Rumsfeld’s countless insouciant witticisms during the 2003 invasion of Iraq. Depending on your political leanings, it could either be shocking or déjà vu.

When you’ve checked those off your list, you can out your inner queen and lighten the mood at Gay Camp at Interplayers. Co-starring Ken Urso, who racked up laughs on the same stage earlier this year in boom!, this over-the-top comedy about two “confused” campers promises to have “more innuendo than you can shake a dildo at!” There are just two performances: July 27 and Aug. 3. To close out your summer of anti-complacency, don’t miss Bat Boy: The Musical, which runs at Lake City Playhouse from July 25 to Aug. 10. It’s not about baseball — it’s about the supposed discovery of a freakish batlike boy that made the front page of supermarket tabloids back in 1992. Outlandish humor and toe-tapping music soften the sting of its unsettling take-home lessons on fear, hypocrisy, scapegoating and prejudice.

“In this business of show, you have to have the heart of an angel and the hide of an elephant,” an aspiring actor once said. Theatrical summer camps might not be the place to equip your elementary-aged child or teen with either, but will give them a good grounding in equally important fundamentals — like blocking, costuming, projection or simply memorizing lines. And though camps provide a productive, enriching activity tailored for kids (not to mention a welcome break for parents), wider attendance at the final performances turns it into a rewarding family affair.

One of the dozens of camps on offer at the Civic this summer involves the Star Wars Trilogy. In the three weeks between July 15 and Aug. 2, children in grades 4-6 will have the opportunity to perform the three classic parts to the intergalactic saga. Visit spokanecivictheatre.com for the full camp lineup.

Prefer something less epic and more noir? In collaboration with the MAC, Interplayers offers a Murder Mystery Theatre Camp for children of all skill levels in grades 4-8 starting on June 17. The end result will be three showings of the thriller Sorry, Wrong Number. The camp runs two weeks and is conveniently divided into morning or afternoon sessions ($195 each) or full days for $295. Mornings focus on backstage elements; afternoons concentrate on performance.

Coeur d’Alene Summer Theatre caters to a broader range of ages in its 2013 Kids Camps. For a cool $195, children and teens aged 8 to 19 are guaranteed a full day (9 am to 3 pm) at camp and a spot in Cindy and Her Fella (July 20 to 26) or Little Red Riding Hood (Aug. 10 to 16). Of course, for a lot less money but a little more time investment, you can always show some Mickey Rooney/Judy Garland-style moxie and stage a play with the neighborhood kids right in your own backyard.

On July 12 and 13, the Pend Oreille Players will hold its fourth annual one-act play festival at the Pend Oreille Playhouse. The selections have been penned by moonlighting or professional playwrights from across the country and include: Mom’s Coming for Christmas by John Franceschini of Irvine, Calif., Audition by Jeff Sult of Valley Stream, N.Y., Poof! by Russell Weeks of Seattle, Dog Fight by Donna Barkman of Ossining, N.Y. and The Pub Menagerie by Tim Scheurer of Westerville, Ohio. Tickets are a reasonable $10.50 per day.

Sandpoint Onstage is presenting The Wizard of Oz, L. Frank Baum’s classic book-cum-musical-cum-movie, at the historic Panida Theater in Sandpoint on Friday and Saturday evenings between June 28 and July 14. And for this one, the community theater organization is following the yellow brick road en masse: They’ve assembled a cast of more than 50 local actors plus a full pit orchestra. Ticket prices fall between $12 and $17. Details at sandpointonstage.com or panida.org.

Coeur d’Alene Summer Theatre has rightfully earned a reputation for putting on popular musicals in grand style, although that style comes at a price: Adult tickets cost $42. Their production of 9 to 5 — which runs Thursdays through Sundays from Aug. 15 to 25 — doesn’t necessarily promise to be any more outstanding than the productions of Big River, Mary Poppins and Romance Romance that precede it this season, but it’s a great chance to see a show that hit Broadway as recently as 2009.

ADD TECHNICOLOR TO YOUR LIFE

There’s a reason Joseph and the Amazing Technicolor Dreamcoat — the first-ever successful stage collaboration by Andrew Lloyd Webber and Tim Rice — has long since become a staple of musical theater: It’s musically rich, visually vibrant and all-ages-appropriate. This production could justifiably be called camp — but only insofar as it’s staged by the roughly 25 top-notch teens who make the cut for the Civic’s Main Stage Performance Camp. Performances run Wednesday to Sunday, Aug. 9 to 18. More info at spokanecivictheatre.com.

Henry V — the fourth and final part of Shakespeare’s “Henriad” — will get an open-air staging in Liberty Lake’s Pavillion Park on Sunday, Aug. 25 from 5 to 9 pm. The performance grounds are slightly too far away from the lake itself to recall the port of Southampton, where the king embarked on his quest to conquer France, but the outdoor atmosphere definitely will add a little something extra to the mood.