The Best Summer Ever! — Urban 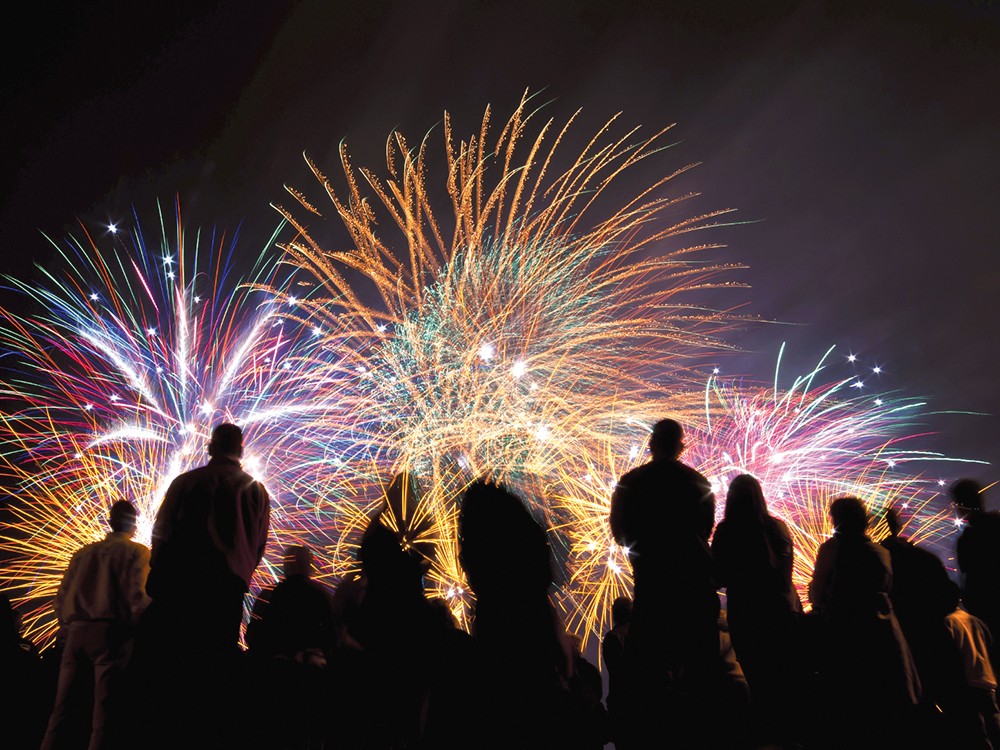 Worshipers of trees and rivers and rocks just don’t get it. There is beauty in nature, yes. But the cities? That’s where the real wonder can be found. Even a modest city like Spokane is filled with multistory monuments of concrete, celebrations of man’s singular ability to harness strength, steel and a millennia of compound brilliance.

Those high-rise parking garages are more than places to dump the Corolla while you jaunt around downtown, shopping local. They’re vantage points. Late in the evening, you can stand on the roof of these garages, look up the night sky, or look down at the city lights below.

On one late summer evening, drive or walk to the top of the Parkade, City Ramp, the Bank of America parking structure, or even the River Park Square garage. (After all, your parking meter change is still paying for it.) Chill. Look around. Have a drink. Listen to the sounds of the city.

This Fourth of July, Riverfront Park will have its usual Independence Day celebration, with music, square dancing, face-painting, a magician, and of course fireworks.

The downtown parking garages can make for an unconventional but memorable viewing spot, a place to set up a lawn chair, gaze down at the city, and watch all the bombs bursting and rockets glaring.

This summer, Spokane’s downtown Convention Center holds anime conventions, church services and merchandising shows. But none of those can match the no-holds-barred, beat ’em up, visceral thrill of roller derby.

Head to the Spokane Convention Center to watch our Lilac City Roller Girls — in all their gritty, purple, knee-padded glory — crush the whiney Yakima Wine County Crushers on June 15 and smash the sickly Corvallis Sick Town S.M.A.S.H. on July 27. Both bouts start at 6:30 pm, and tickets are $12 ($10 for seniors/students/military). More info at lilaccityrollergirls.com.

360 KICKFLIP-TO-INDY AT THE UTF SKATEPARK

The skating community gets mad if we imply the downtown Under the Freeway skatepark is a gritty, needle-littered hellscape, rife with knife fights and bum-ollieing (apparently it’s not), so we’ll just stick to skater-approved lingo: Hey bro, the UTF, near Lewis and Clark High School, is a totally tubular place for radical dudes to catch gnarly air, grab some grindage, and get down old school. To the XTREME!

POWWOW IT UP AT RIVERFRONT PARK

After being canceled in 2011, the Spokane Falls Northwest Indian Encampment and Powwow returned last year, drawing dancers from all over the Pacific Northwest and Canada. This year, the Aug. 23-24 festivities at Riverfront Park will include an Indian market. It’s held in the middle of the city instead of on a reservation to draw the many Indians who don’t live on a reservation and to meet at the Spokane River, a traditional gathering place for the tribes.

PICNIC UNDER THE RAGING FALLS

There’s a path behind the old Washington Water Power building near Riverfront Park, and a staircase that leads to a downhill path. At the very bottom, you can look out and see the mighty Spokane River falling behind you. Not a bad spot to pull out the ol’ checkered tablecloth, unpack some sandwiches and have a sunshine-drenched summer lunch.

Sometimes city life is best experienced in a tiny town. And in our region, every village gets its day. Reardan has Mule Days, Elk has Pioneer Days, Pullman has the National Lentil Festival. Me? I’m a rhubarb man. Cake, pie, sauce that I drizzle over vanilla ice cream — I’ll do a lot of things and go a long way to get myself some quality rhubarb. So I have my eye on the Rhubarb Festival up in Newport at the CREATE Art Center, June 15 from 10 am to 3 pm.

Local artist Harold Balazs is famous for weaving together abstract sculptures of enamel and steel. You’ll find several of his sculptures throughout Spokane, but perhaps the most iconic is the 20-foot “Lantern” on the side of the Opera House. It can be climbed. It’s meant to be climbed. Go when it’s dark. Hand over hand, climb to the top, read what is inscribed there, and receive Balazs’ wisdom. Go home a wiser, more serene person.

With parks like Manito and Riverfront in the middle of the city, it’s no surprise that Spokane is a finalist in Outside Magazine’s Best Towns contest. We’ve got a lot of green space, a perfect spot for croquet or a little bit of bocce. Don’t have the balls? Use rocks and pine cones instead, like the cavemen did when they played bocce.

Environmental concerns like the Earth’s ever-rising temperature have eclipsed simpler concerns like “Give a Hoot, Don’t Pollute.” But summer remains an ideal time to teach your kids that part of being a good person is learning to pick up the messes other people made (a crucial skill for someday living in a college dorm). Go on a walk downtown, searching for discarded paper cups, candy wrappers, plastic bags and other signs of urban decay. Then take the pile you’ve collected and feed it to the hungry metal goat in Riverfront Park. The spirit of Expo ’74 lives.

The Centennial Trail is one of Spokane’s coolest features, but it’s amazing how many Spokanites never bother to actually set foot on it. With a whole new section through Kendall Yards due to be completed soon, it’s a perfect time to try it out. We don’t care how you choose to traverse the trail — walk, run, skip, bike, skate, longboard, Segway, crab walk — summer is about moving and being outside. This summer, let the treadmill and elliptical rest. Go Centennial.