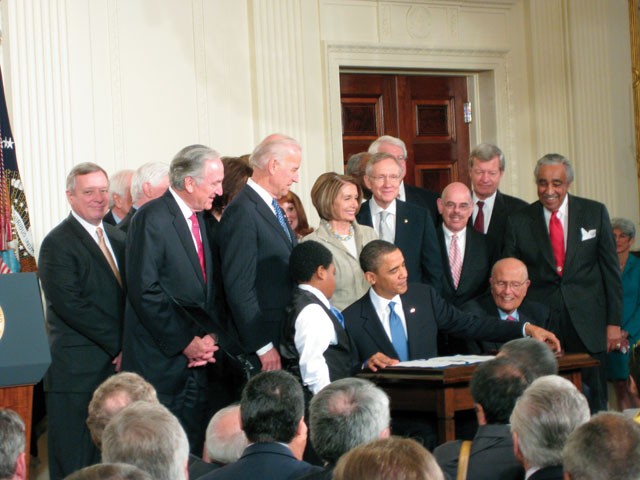 When President Barack Obama signed the long-debated health care reform bill into law on March 23, he affected one-sixth of the U.S. economy with a few pen strokes. While the bill runs 2,400 pages, it’s predicted to create 200,000 to 300,000 pages of new or changed rules and regulations.

On May 20, members from all across the region’s medical landscape came together to puzzle over what the bill will mean for them.

The big message of the Health Care Reform 101 conference was something most players already knew: In Spokane, health care is huge. Patrick Jones, executive director for the Institute for Public Policy and Economic Analysis at Eastern Washington University, showed that besides government employees — which include those at Fairchild Air Force Base and Spokane Public Schools — health care providers are the largest employers in the region. By some metrics, the region’s health care sector contributes, per capita, nearly double the state average.

Still, predictions about the effects of reform are very much in limbo. If the health care bill remains unchanged, if the implementation is similar to what the bill’s proponents predict, this might happen.

There’s a lot in a 2,400-page bill, explains Joel Gilbertson of Providence Health and Services, and most of it gets phased in over the next 10 years. As it stands, the law increases the number of people eligible for Medicaid and requires all Americans to obtain some sort of health insurance or pay a penalty. To assist people with getting insurance, it creates health insurance exchanges — think Expedia or Travelocity for health care, Gilbertson says. It will punish poorly performing hospitals and reward those at the top. It will also penalize large employers for not offering health insurance.

For Spokane businesses both large and small, the effects are complicated. At the conference, business owners expressed concern they may find insurance rates increasing and face penalties for not providing health insurance. Nancy Nelson’s Humanix Staffing and Recruiting temp agency turns in W2s for 1,100 temporary employees. She calculates it will cost her business more than $376,000 in fees a year.

“The voice I bring from business is just uncertainty,” Nelson says. “We just don’t understand the impact, and we need to start taking the steps to understand that.”

But here’s the thing that really impacts the Spokane region: 30 million uninsured people in the United States — the poor, those with preexisting conditions — will find themselves able to purchase health insurance.

“You show up at the door,” Gilbertson says, “you get health insurance.”

The goal is for 94 percent of Americans to have health insurance by 2020. In Spokane, Jones calculates, that means 30,500 newly insured Spokane residents. “I think it’s pretty clear that the uninsured have costs for all of us when they do hit the health care system,” Jones says.

“When people go without health care, when they finally do present for care, they have many, many unmet needs, and they cost much more,” says Peg Hopkins, with the Community Health Association of Spokane. “We are firm that [reform] will reduce costs once we have everyone under the big umbrella.”

Theoretically, Jones says, the wave of newly insured patients means a lot more revenue for the health care community. Even though already low Medicare reimbursement rates will tick down even further (barring congressional action), Jones says area hospitals expect the sheer volume of new non-Medicare patients to make up for it.

Which leads to another looming problem: sheer volume.

“One of my concerns for Spokane,” Jones says, “is I do think we are probably sitting worse off than most states in that our pipeline for physicians, and probably nurses, is really inadequate to meet the future task.”

The rate Washington pumps out physicians is lower than similarly sized states. Without new doctors, Jones predicts, your primary care doctor may only be able to see you for a 10- or 15-minute appointment.

Tom Schaaf, a medical director with Group Health, is also concerned. “Academic medicine is really skewed toward sub-specialties,” Schaaf says. “When I went into family medicine out of UCLA, I heard from professors, ‘Why are you wasting a UCLA medical education on family medicine?’” In less than a decade, he says, the number of general practitioners has fallen from 55 percent of all medical doctors to 20 percent.

That’s why the push for a four-year medical school in Spokane’s University District has taken on renewed fervor. But even in the best-case scenario, it will take a decade or more for the effects of a medical school to be felt. In the meantime, it’s all about offering doctors incentives for living in the region and competing with surrounding states for a too-small pool of doctors.