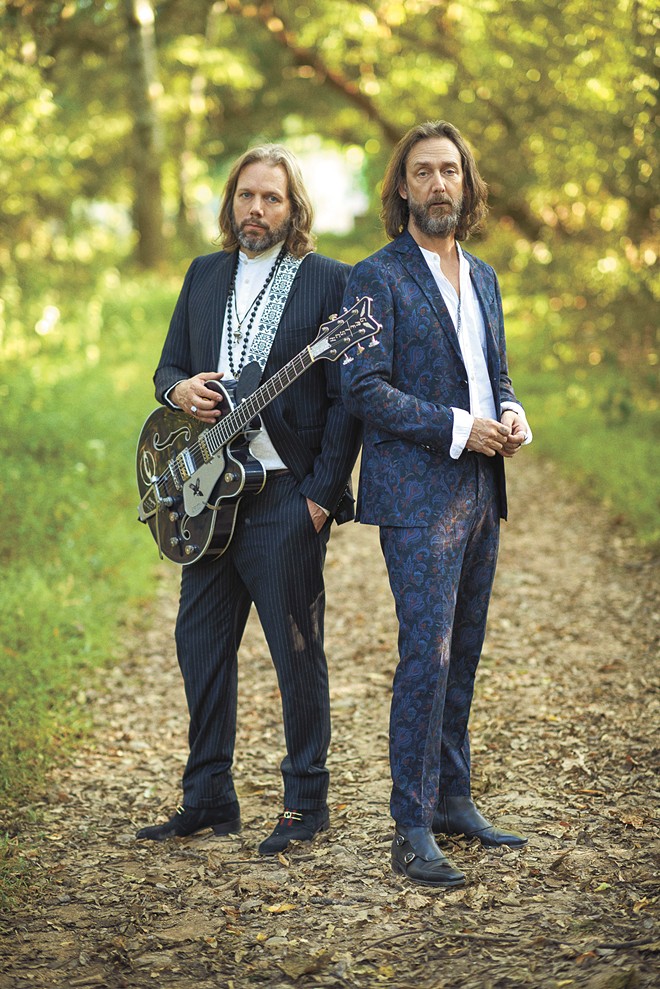 In April 1990, I went to see Junkyard, a middling blues-metal band with a guitar player who'd been in Minor Threat, thereby raising my punk rock-loving curiosity. There were maybe 12 of us in this cement box of a venue underneath an interstate. The place typically drew an amazing slate of underground/indie bands, along with regular visits from bored local Nazi skinheads, and my friends and I got there early this night, in time for the unknown opening band.

That band was the Black Crowes, touring for the first time two months after releasing their debut album, Shake Your Money Maker. There was no mistaking they had something special. The lanky singer moved like classic Mick Jagger, the two guitarists traded killer riffs on song after song, and the whole band delivered like they were playing an arena instead of a mostly empty shithole.

The Black Crowes played those types of venues for a few months before the album took off thanks to a hit cover of Otis Redding's soulful "Hard to Handle," Stones-y rockers like "Jealous Again" and a massive ballad about a heroin addict, "She Talks to Angels." Their tour eventually did move to arenas over the next 18 months, the Crowes opening for the likes of Aerosmith and ZZ Top, and Money Maker slow-burned its way into becoming the third best-selling album of 1991, right behind Mariah Carey and Garth Brooks, and ahead of Madonna, Whitney Houston and the Crowes' fellow Georgians R.E.M.

Shake Your Money Maker was a strange success in that musical landscape. The Crowes' retro sound hit the sweet spot for rock fans after hair metal dominated the late '80s and before so-called "grunge" hit big. It launched a long career for the Crowes, selling more than five million copies, and band-leading brothers Chris and Rich Robinson reunited in late 2019 after years of brotherly turmoil to announce a 30th anniversary tour celebrating Money Maker. The pandemic had other ideas, so now the tour is planned for 2021, and a 30th (OK, 31st) anniversary special edition of Shake Your Money Maker arrives this week, including demo tracks, long-lost recordings from the Money Maker sessions, and a complete live show recorded in the band's Atlanta hometown in 1990.

Rich Robinson called from Nashville to talk about his Money Maker memories and more. These responses have been edited for length and clarity.

INLANDER: What do you think of now when you look back at recording the album?

RICH ROBINSON: Being 19 years old, it was just a tremendous amount of fun, and it seemed like a big accomplishment, coming where we came from. We didn't have a huge following in Atlanta; we were playing music that didn't really fit in anywhere. There weren't many rock 'n' roll bands during that time in our music scene. It was either heavy metal or really alternative, and when we started we came from more of an alternative place.

We were way into R.E.M. and Let's Active and the Paisley Underground movement on the West Coast. But some of my earliest childhood memories were listening to Crosby, Stills, Nash and Young, and Joe Cocker and Sly Stone and Bob Dylan. Otis Redding and Mose Allison. You have these influences that come from your parents, and you reach a certain age, and you reach out for your own musical identity. Chris got way into Prince and Funkadelic, and I was into AC/DC and bands like that. By the time we got to where we were going to be a band and start writing songs, we came back to rock 'n' roll music, in its broadest sense.

Why do you think the album was commercially successful? It wasn't just a bunch of critics who liked it.

We put out Shake Your Money Maker on a tiny-ass label [Rick Rubin's Def Jam Records], and God knows why [it took off], but it was authentic. It was sincere. We wrote these songs that spoke to us, and we weren't bullshitting. We weren't trying to be successful. We weren't trying to write power ballads or compete with Warrant or whatever. We just made this music, and for whatever reason, it connected.

You had a lot of songs ready, and some that didn't make the album are coming out on this new edition. How did you decide what made the album?

That was [producer] George [Drakoulias'] decision. George had been in the studio; he was an associate producer on the Cult's Electric record. He came to us, and he had a brilliant ear, and he knew what he was doing. We didn't even have a manager. George just kind of said, "Let's go make a record." I don't even think we'd signed a record deal when we went in to start making the record.

The album took off when you were on the road, and the band basically stayed on tour for a couple years. Could you feel your life changing?

It was 22 months and 350 shows. When you're on tour, you're in a submarine. You don't see the world outside. The bigger you get, the more famous you get, the more you need things like security to walk around. Your life changes in that way. I always liken it to a wave, or a f—-ing tsunami. You're riding that wave. When it stops, you have to kind of figure it out.

The last three months we were in Europe, and that's a long time to be traveling around Europe. We played these two or three shows at Hammersmith Odeon in London, a venue we'd heard of and were excited to play. Then they just drop you off at home! No one around; you're stuck there. There's no one to tell you where to be. There's no one to tell you what to do. It sounds silly and weird, but all of the sudden you're like, "Should I go to the grocery store? Am I allowed to do that?" It's almost like shellshock, or PTSD. You're living this [touring] life, and then all of the sudden it just stops.

You didn't spend much time at home. You put out the follow-up to Money Maker in 1992, The Southern Harmony and Musical Companion. And it went to No. 1. No sophomore slump.

Chris and I had written two albums' worth of material while we were on tour for Shake Your Money Maker. I remember we got home right before Halloween [1991], and we made Southern Harmony maybe the early part of '92. And we went right in and it took us a week to make the record. We went into Chris's garage and wrote the songs, and then went into the studio. Part of it was, "We're not going to obsess over this. We're not going to try to have another 'Hard to Handle' or 'Angels.' We've played 350 shows, and we've reached the point where we're a great band. Let's go into the f—-ing studio and play these songs and record them and not overthink this."

Are you still planning on playing Money Maker in order on the tour, or did that change when you had to push the tour back?

That hasn't changed. We're really focused and excited to do this. We've never done anything like that before. From day one, when Shake Your Money Maker came out, we were changing. Our first night opening for Aerosmith, we opened with a brand new song no one had ever heard.

It was the first time in over 30 years that I haven't toured. My last tour with my band Magpie Salute ended in early February of 2019. So it's been weird, apart from a short round of acoustic shows last February that Chris and I did to build up to the tour. But I have small children, and it's been really amazing to be able to spend time with them every day, for over a year. ♦

The original print version of this article was headlined "Struttin' Blues"