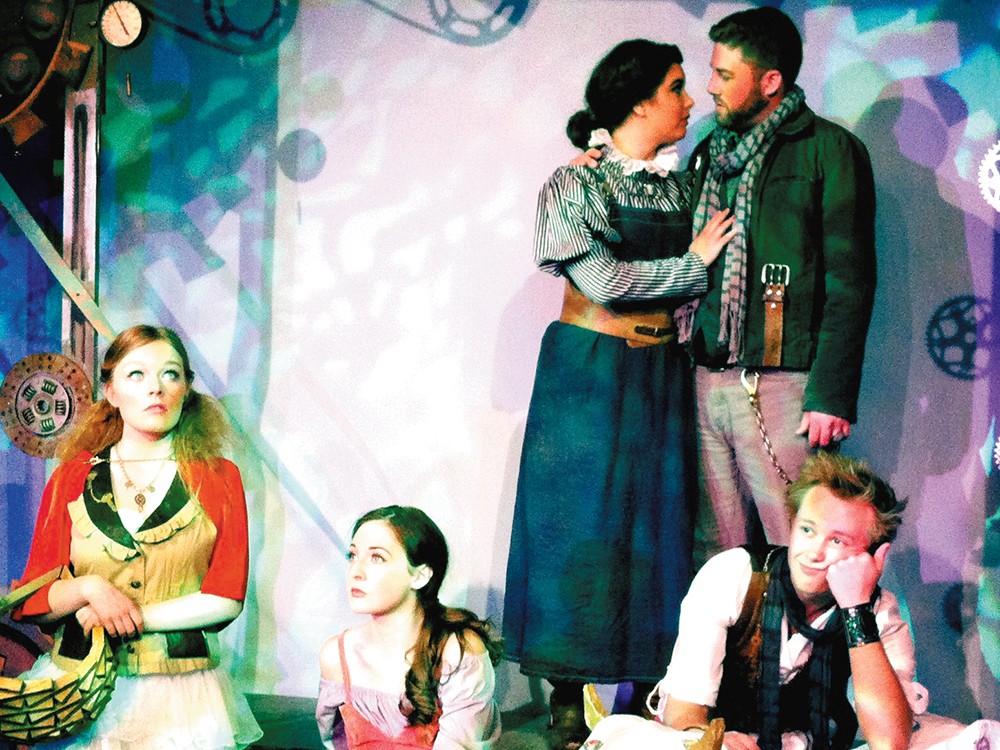 When you’re out of the woods, as the expression runs, you’ve made it through a difficult situation with no chance of further reprisals or repercussions. To go into the woods, then, would naturally be the opposite: to enter into a tough situation with an uncertain outcome. And though the latter expression doesn’t really exist as such, that’s precisely the conceit of James Lapine’s and Stephen Sondheim’s 1986 tongue-in-cheek reworking of classic fairy tales, now playing in a self-styled “steampunk” version directed by Troy Nickerson on the Lake City Playhouse stage.

With help from the Narrator (Mike Hynes), Into the Woods opens with a recap of the current status quo. The Baker (Andrew Ware Lewis) and his wife (Emily Cleveland) are unable to conceive. Little Red Ridinghood (Madison Rasmussen) has an insatiable appetite for the Baker’s goods and a fear of straying from the forest path on her way to see Granny (Teri Grubbs). Dimwitted, kindhearted Jack (Brendan Brady) wants to care for his desiccated old cow, but his mother (Renei Yarrow) has more practical concerns. Cinderella (Aubrey Shimek) wants to attend the royal festival and stop suffering her stepsisters’ abuse.

Though familiar to the characters, this status quo is not a satisfactory one by any means; they collectively express their individual discontentment in aspirational “I wish” lines in Sondheim’s pulsating prologue. The machinations of the equally discontented Witch (Abbey Crawford), who’s secretly hiding her daughter — of sorts — Rapunzel (Christine Mullaly) in a tower, compel the Baker and his wife into the forest, where their paths will intersect with the other wish-seekers.

As a metaphor made visual, the woods in Nickerson’s steampunk version are better suited to the musical than most big-stage offerings. Thin, twisted metallic sheets climb up the walls like vines. Half-visible cogs and exposed mechanics create a cold, menacing environment. The setting feels claustrophobic, foreboding. So when the Wolf (Patrick McHenry-Kroetch) slinks out to seduce Red Ridinghood in his lascivious baritone, his threat and her uncertainty couldn’t be underscored by a more appropriate mise en scène.

The factory-and-rag effect also lends this dark comedy a bite that’s missed in most stagings of Into the Woods, which, despite its frequent death and disenchantment, often lose sight of the emotional power of the discrete stories and instead bounce between twee and knowing. That’s partly a shortcoming of the source material — as is the introduction of the unseen Giant, which feels like second-act padding at the best of times. If there’s a single fault with this outstanding Lake City production (well, aside from ear-piercing screams being delivered with am-dram gusto), it’s that the Giant’s arrival doesn’t come off smoothly from either a technical or thematic standpoint.

The delight of some of Sondheim’s most nimble wordplay, the lack of pretentiousness in the production’s steampunk theme, along with some stellar ensemble and star performances — Crawford, Rasmussen, Shimek and Ware Lewis all deserve particular mention — make this an excellent finale to a season of high-water marks at Lake City.