The public deserves real answers from Mayor Condon, not deflection 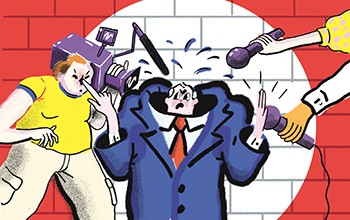 The legendary showman P.T. Barnum once quipped that there's no such thing as bad publicity, but in government the opposite is true. Just ask Spokane Mayor David Condon. One year ago at this time, he was comfortably cruising to re-election before the resignation of former police Chief Frank Straub generated a scandal with no end in sight. Two weeks ago, after a recall petition against Condon was filed, he exposed a characteristic often discussed but rarely seen in public: his fiery temper. It revealed itself when Condon responded petulantly to a KXLY news staffer seeking an interview by saying, "Make your own ratings."

It's always more convenient to attack the messenger when the truth hurts, disregarding the accountability that comes with holding public office.

Blaming the media is an irresponsible strategy — and increasingly common. The victimization runs rampant — a preoccupation for politicians to blame either "liberal mainstream" or "right-wing" media for any and all: what they write about or don't. It's the media's fault that Sen. Bernie Sanders lost the Democratic presidential nomination to Hillary Clinton. Republican presidential nominee Donald Trump's campaign sends out "Media Bias of the Day" surveys, vilifying outlets like the Washington Post, New York Times and CNN for how his endless fabrications are covered.

Shifting the blame and refusing to accept responsibility only breeds cynicism. To be fair, media need to be accountable for telling the truth. We might disagree with each other, but fighting for openness in government is critical.

That's the philosophical challenge for the Condon administration, which has longed for the public sector to be closer to the private sector. City Administrator Theresa Sanders, a firm believer that the public simply doesn't need to know what's going on inside City Hall, called media stories on the Straub scandal "malicious and salacious" and argued that public records laws are troublesome. This attitude has driven personnel decisions, feeding the current turmoil. Running government like a corporation, the "City Of Choice" has tried to abide by the business principle that the customer is always right. But the people currently running it have forgotten who the customer is here.

So why does Condon believe he should be held to a different standard than that to which politicians have traditionally been held?

I know this much: When the publicity does turn bad, our mayor is classically turning his eyes to the only target left to blame other than himself.

Spokane is fortunate to host some talented and responsible journalists. By shutting out local media who have legitimate and fair questions about the recall, Condon is proving he isn't a victim of media bias, but of his own behavior.

His only interview, with conservative talk-show host Mike Fitzsimmons, who formerly co-hosted a show with Mark Fuhrman — who committed perjury during the O.J. Simpson murder trial — doesn't suffice. He felt comfortable enough with Fitzsimmons to share that by raising money for a campaign through a political action committee, he'll be able to share the controlled message he wants the public to hear.

"I will use that opportunity to tell Spokane's story. And say where we're going, and how we're going to face the challenges going forward," Condon said. "I think the people deserve to be communicated to." They certainly do. I guess we'll have to wait until Condon has constructed his version of Spokane's story.

The best reporting digs deep and avoids the pitfalls of taking what politicians say at face value. Our community will never outgrow our need to check institutions as long as questions remain at City Hall.

Condon must answer all of those questions. We'll be listening. ♦

Our Lives with the Poets: How Poetry Speaks to the Pandemic