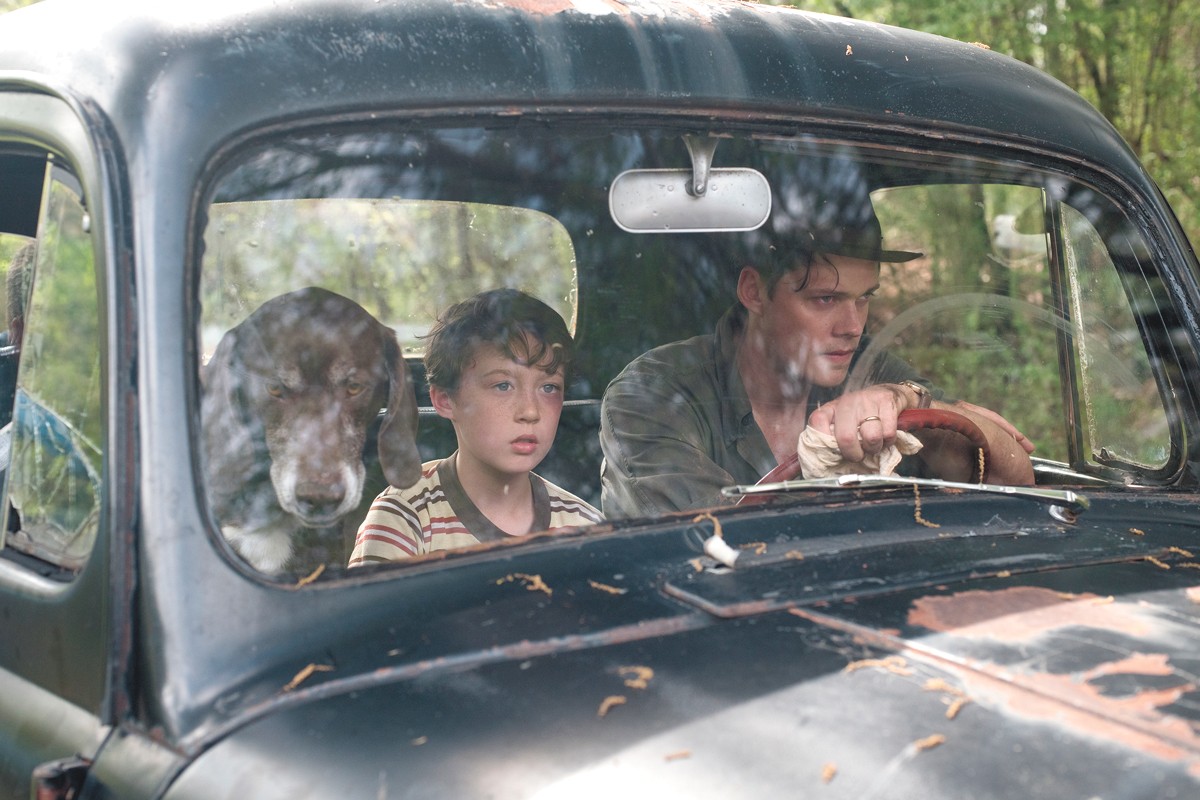 One of these three is dead in the first act. It's not the dog.

The Devil All the Time is a bloody, sprawling multigenerational epic about religious hysteria, violent retribution and sadistic twists of fate. The story stretches across two decades, beginning as soldiers are returning home from WWII and closing at the dawn of the Vietnam War, set in a small Ohio town populated by false prophets, murderers, crooked cops and people whose lives are defined by varying degrees of disappointment. It's Southern Gothic at its gloomiest.

The film is based on a novel by Donald Ray Pollock, who channels the rural eccentricities of William Faulkner and the bitter irony of Flannery O'Connor. The author narrates the movie himself with a drawling, bemused sense of omniscience, and he has so many insights into the minds of his characters that we really do begin to think of him as a god-like figure, guiding his creations toward most certain calamity.

His perverse fable begins with Willard Russell (Bill Skarsgard) coming home from the war, a ball of repressed anguish. He marries and has a kid but remains an outsider, spending so many of his nights kneeling before a cross he built out of old planks and hid deep in the woods. Russell and his wife Charlotte (Haley Bennett) will be dead before the end of act one, both victims of cruel circumstance, leaving their son Arven (Tom Holland) to be taken in by his grandparents. As he gets older, Arven becomes the self-appointed protector of a fellow orphan named Lenora (Eliza Scanlen), both of them indelibly marked by their tragic backstories.

They're at the center of a tangled web of supporting players, including two revivalist preachers — one (Harry Melling) whose unwavering faith drives him mad, and the other (Robert Pattinson) who uses his position to prey on his congregation — a corrupt sheriff (Sebastian Stan) in the pockets of mobsters, and a deeply disturbed couple (Riley Keough and Jason Clarke) who pick up male hitchhikers and kill them in the woods.

Their fates intertwine within a complicated, novelistic structure that reminded me of John Sayles' great Lone Star or Derek Cianfrance's overlooked The Place Beyond the Pines, all of which are about men inheriting the sins of their fathers. It's interesting that The Devil All the Time was directed and co-written by Antonio Campos, because his earlier films (Afterschool, Christine) have all been incisive, insular character studies that focused on one troubled personality. Here he's working on a much broader canvas than he has before, but his talent for translating emotional interiority to the screen remains intact.

Like Campos' earlier films, The Devil All the Time takes a mostly fatalistic view of the world, as its tortured souls search for enlightenment and find only depravity. It's relentlessly downbeat — if the movie introduces you to a truly virtuous character, you can bet they won't stay that way for long — which may explain why it has received such a cold shoulder from critics.

Surely it's not a perfect film: It ends with perhaps one too many coincidences and one too many violent standoffs. Its female characters aren't given as much agency as the men, which I suppose could be seen as much a dramatic shortcoming as an indictment of its own patriarchal ecosystem. But I responded to the movie's style, to its ambition and scope and performances, particularly the small but crucial roles played by Skarsgard, whose haunted eyes could serve as the film's central image, and Keough, who discovers she enjoys being a joyriding murderer. Pattinson, as the preacher who uses his pulpit for nefarious purposes, has been mocked on the internet for his unplaceable accent here, but it strikes me as exactly the right choice: The guy is a charlatan, and it stands to reason that his dialect would be just as slippery as he is.

The whole thing may be quite a bit overwrought, but in that sense, it's reminiscent of an especially ruthless Bible story: Every character's being is forged in the fires of death and despair, their prayers for salvation met with resounding silence. It would be too easy to blame their troubles on a malevolent force, on a devil that's controlling their destinies all the time, but that's too simplistic a justification for the horrible things men are capable of.

After all, hell is other people. ♦

THE DEVIL ALL THE TIME

The original print version of this article was headlined "Sin & Salvation"