At Dawn of the Donut, brains and intestines have never been so delicious 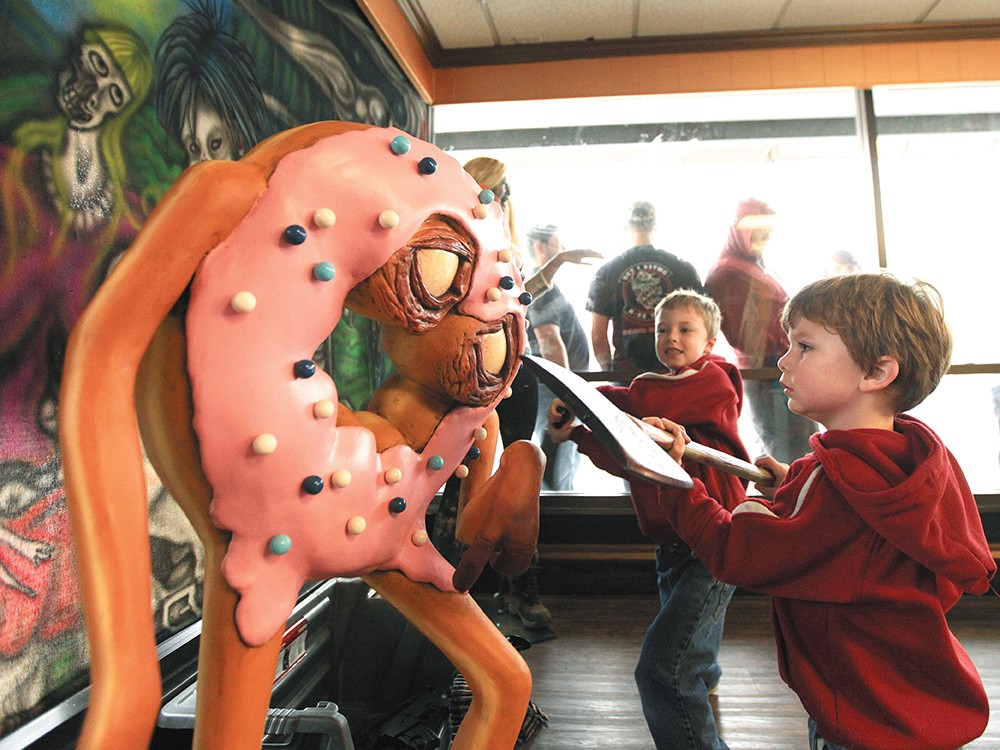 Young Kwak
J.T. Sutherland, right, and his brother, Noah, take the ax to a donut zombie.

By dawn, the rain had turned apocalyptic.

Somehow, it was almost fitting that torrential rainstorms drenched Spokane last Friday morning, leaving a trail of car accidents, jackknifed semi-trucks and middle-of-the-roadway swimming pools in its wake. Things were just slightly left of normal — maybe what it will feel like just before the apocalypse happens.

Midway up the North Division Street hill, the air smelled of sugar and hot coffee. People walked in twos and threes to join a line ducked under the dripping eaves — a line that wrapped from the entrance of a tiny brick building and nearly all the way around to the front again. Cars snaked through the parking lot and down the side street, blinkers blinking, engines turned off. People had been waiting here since the sun came up, but not just to get a fresh donut. No, they could get a donut at one of the other custom, handmade donut shops just minutes from here.

These people — moms holding their children, teens on summer vacation, businessmen in Friday casual — were waiting to get an experience alongside their donut and coffee. You can get a donut anywhere, but at the just-opened Dawn of the Donut, you can eat a fritter, pose for pictures with a zombie mannequin holding a pair of nunchuks, and on this particular day see a guy dressed up like a zombie moaning “DONUT!” while you wait.

By 11 — two hours before closing — there wasn’t a donut left in the house.

Just a few days before Dawn of the Donut opens its doors for the first time, Jayy De Boer’s phone is ringing off the hook.

The pink-and-white-haired wisp of a woman is no casual zombie fan. She loves zombies. Across the back window of her gold-colored PT Cruiser is a sticker that reads “ZOMBIE ABUSER.” And instead of stick figure-shaped stickers for her family, she’s got zombies. A mom zombie — that’s her — and a little-boy zombie, for her 5-year-old son.

So it seemed like fate when De Boer, who recently relocated to Spokane from Moses Lake, saw an ad on Craigslist looking for a manager of a donut shop. She thought, why not apply? That could be fun. When she got on the phone with the Missoula-based owners, Martin and Paige Judnich, she never expected how perfect the job would be for her.

“They said, ‘We really like your résumé. How do you feel about zombies?’ ” De Boer says. “I was like, ‘Are you kidding me? Perfect. Let’s do this! Can I start tomorrow?’ ”

For the past few months, De Boer has helped make the Judniches’ dream of owning a zombie-themed donut shop a reality. By last Friday — now with black-and-pink hair — the sugary zombie apocalypse they wanted had arrived.

Saying that Dawn of the Donut takes a unique angle on donuts is an understatement. Yes, there are “normal” donuts here: your traditional raised and cake donuts that just go for $1 each. But then there are the shop’s specialty donuts ($2) — donuts so delicious that they give any other local donut shop a run for its money. There are donuts covered in M&Ms, raisins, Rice Krispies, Cocoa Puffs and Oreos. The “Brains” are brain-shaped fritters filled with apple or apricot, soft and cakey on the inside with an amazing crunch on the outside. There are donuts shaped like coffins, others like little zombies.

The shop also produces a huge line of vegan donuts, something you can’t get anywhere else in Spokane.

De Boer laughs while telling about a day a few weeks ago, when she was hanging a mural outside the shop. A car drove by and someone yelled, “You’re going to hell! Buncha freaks!”

“I’m sure we’ll have naysayers that think that we’re sadistic or evil. Devil worshippers. The Antichrist. I’m sure we’ll get it all. But those type of people that are so judgmental won’t be our customer base,” she says. “It’s supposed to be fun. Donuts are fun.”

Speaking of Dawn Of The Donut, Casual Friday Donuts 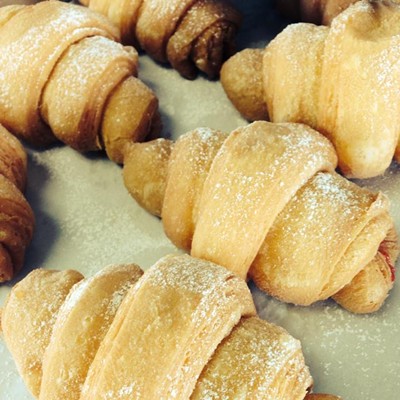 Update | Dawn of the Donut