About 20 minutes outside of downtown Spokane and a few more miles down a curvy, meandering road sits Medical Lake's Waterfront Park.

The park, while quite desolate during the colder months, is vibrant and full of activity once the weather creeps up past 70 degrees. The beach harbors sandcastles made by careful hands and the baseball fields are often flocked with Little League teams just learning how to slide into home. However, the biggest event that the tiny town, and even tinier park, sees is the annual Blue Waters Bluegrass Festival.

For that weekend, the park is filled with magical tunes of bluegrass music. It seemingly emanates from every corner of the park, coming from campsites and the main stage that's situated between the evergreen trees that tower above. With the festival celebrating its 20th year this weekend, the bands and the attendees keep coming back to bask in the beauty of music and community.

Kevin Brown, the festival's music director, thinks that he's pinpointed why the festival has had such lasting power.

"First off, it's just a great spot," Brown says. "It's beautiful and a wonderful, perfect place for a festival like this one. All of these traveling bands come here and the first thing they say is 'Wow, this is so nice with the lake and all of the trees!' I think the other reason is just the local folks and the local bluegrass community that continuously get the word out there and help us out year after year."

Brown has been with the festival since day one, along with good friend and board member Steven Meltzer. Both stepped up to the task when Denny McDaniel, the late owner of Medical Lake's only grocery store, approached Brown about starting a bluegrass festival. The first meeting was held at a small resort area just west of Medical Lake.

"Half of the people there were ML locals," Brown says. "And the other half were well-established bluegrass folks. After some discussion and divvying of roles, we decided that we needed to take this on and create an area festival that would be successful."

The first iteration of the festival was attended by about 20 people. Now, Waterfront Park is bustling and filled to the brim with musicians, fans and families for three days out of the year.

"The very first year of the festival, 2002, I invited this band called John Reischman and the Jaybirds," Brown says. "John is my absolute favorite mandolin player and now, 10 years later, they're coming back for the 20th anniversary. It's a full-circle moment that I'm so happy to be a part of."

As a child, Mannan traveled the country with her family, playing bluegrass music from the time she was 5 years old until she branched out on her own ventures. Mannan says that Blue Waters has always been more inclusive when it comes to what type of bluegrass music can be performed at the festival.

Typically, bluegrass bands are composed of fiddles, banjos, upright basses, acoustic guitars and mandolins; however, in the world of "newgrass," a term coined in the '70s to describe rock 'n roll/bluegrass fusion, the world is your oyster.

"Kevin always made sure to broaden the categories," she says. "From what I've seen, the bluegrass scene on the West Coast is far more balanced. There are always more female performers on the lineups, and it's OK to stray from bluegrass-specific instrumentation and throw in your own creativity. Blue Waters and the larger Spokane bluegrass community is one of the most inclusive, accepting and encouraging."

When curating the lineup each year, Brown says he tries to find "something for everyone." Though the festival has changed and grown over the years, the meaning has stayed the same from the very start.

"We might not get the biggest names in the bluegrass world," says Brown. "But, we get people who have matured along with the festival and an incredible community that has kept coming back for 20 years now. We're in it for the community and as long as they keep coming, we'll be here." ♦ 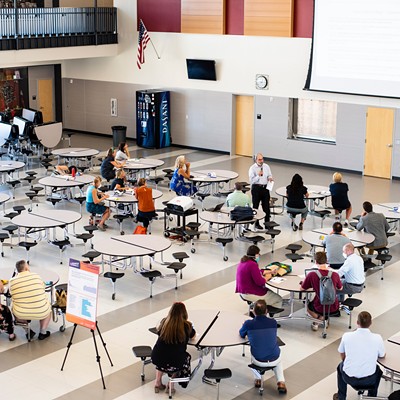