Musicals like My Fair Lady and West Side Story, in which people suddenly stop talking and start singing, have always jarred me. But Jersey Boys, the story of Frankie Valli and the Four Seasons, is not a typical musical. It’s a dramatic story about the singers and writers of some great early-to-mid-’60s tunes, so it’s very natural to have them burst into one of those songs: “Sherry,” “Rag Doll,” “Walk Like a Man,” and many more pop-rock/doo-wop classics that featured Valli’s fantastic falsetto. I’d not seen the stage play, but I know the words to the songs, and I was singing right along with them.

Conventions are broken from the get-go here when in the early 1950s, singer-guitarist/small-time hood Tommy DeVito (Vincent Piazza) introduces himself to the camera, saying that he’ll be telling the story. Tommy works for local gangster Gyp DeCarlo (Christopher Walken), sings at the Strand Club with a couple of pals under the name The Variety Trio, and invites his younger, angelic-voiced pal Frankie Castelluccio — later changed to Valli (John Lloyd Young) — onstage to croon “I Can’t Give You Anything but Love.”

There’s trouble with cops, loyalty among friends, guys meeting girls, and a slow, steady examination of something musically magical coming together. But not easily. Tommy and bass player Nick Massi (Michael Lomenda) take turns doing jail time. New dynamics develop with the addition of keyboardist-composer Bob Gaudio (Erich Bergen). There are differences in dreams: One member is content to sing as a hobby; another wants it to be a career.

When the group hooks up with talented, excitable and comically swishy record producer Bob Crewe (Mike Doyle), the movie clicks. Anyone wondering if director Clint Eastwood can handle this kind of material has nothing to worry about. He makes great use of Tommy, and later other characters, stepping out and speaking to viewers in asides, and he catches the energy of the story — both the joyous side (the songs) and the negative parts (money problems, inner turmoil among group members). Pay close attention, and you’ll see an Eastwood “cameo,” as a camera pans past a TV set that’s showing an old episode of Rawhide.

Eastwood also catches wonderful small moments, my favorite being the instant where some of the guys are watching the movie Ace in the Hole, and a chance comment inspires Gaudio to write “Big Girls Don’t Cry”. Eastwood and his writers — Marshall Brickman and Rick Elice adapted their own play — fill the film with lots of “I didn’t know that” bits of info. For instance, I didn’t know that the Four Seasons took their name from a bowling alley; I didn’t know that then-struggling actor Joe Pesci was an important component in their success.

Even the basic construction of the film is terrific. There’s a point where, before the group sees any real success, Bobby bangs out four songs, then comes up with a fifth: “Sherry,” which the members sing, reading from sheet music, over the phone to their producer, who shouts, “Get over here! Right now!” Suddenly the group is all dressed up, singing on American Bandstand. They’re playing in larger nightclubs, they’re in the studio recording “Walk Like a Man.” The hits start rolling in.

The energy flags when some of the drama gets in the way, including Frankie’s home-life problems, but picks up again when it turns, via flashback, to problems that had been percolating within the group. A burst of it is released in the thrilling finale that starts as an a cappella quartet street scene, then evolves into others joining in — musicians, singers, dancers, eventually the whole cast. As credits roll, a couple of real Four Seasons recordings come up. People leaving the theater knew the words to the songs, and they were singing right along with them. ♦

Jersey Boys is not showing in any theaters in the area. 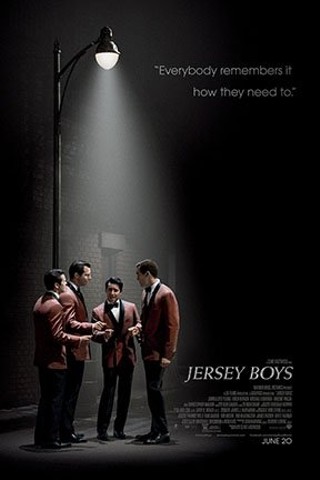