Washington Sen. Patty Murray is one of D.C.’s most powerful Democrats in one of the Senate’s most impossible jobs 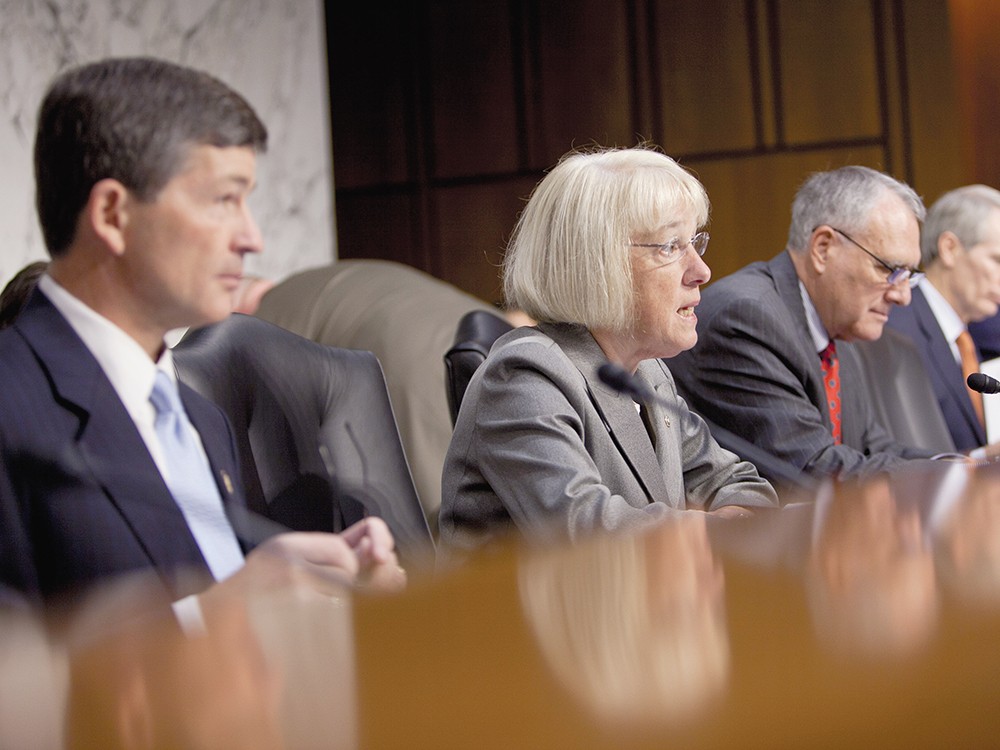 Fresh off the shellacking in the 2010 elections, Senate Majority Leader Harry Reid asked four senators to run the Democratic Senatorial Campaign Committee, and only one said yes. Few thought Democrats would be able to hold onto the Senate.

“Well, today the poor woman who they finally suckered into taking that job is a super-genius hero of the year,” liberal pundit Rachel Maddow said after the 2012 elections. Not a single Democratic incumbent lost. Democrats actually gained two seats.

That woman, Washington Sen. Patty Murray, stood before three American flags after the election and proclaimed, “We’ve played offense every day, and we never let up… ” and began listing all the Democratic winners to cheers.

But now she’s in another nearly impossible job. She’s the head of the Senate Budget Committee. It’s either one of the most important or impotent committees on Capitol Hill, a committee that hasn’t officially passed a budget resolution in nearly four years. If Murray can’t pass a budget by next April, senators will have their paychecks withheld.

Meanwhile, the $16.5 trillion national debt grows. The economic recovery continues to limp forward. Work to fix one problem, and risk inflaming the other.

But first, Murray is standing on the precipice of another budget crisis, on the heels of the debt ceiling and fiscal cliff fights. Unless resolved at the last minute, on Friday the “sequester” will begin deeply slashing domestic and military spending. The $85 billion cut would hit everything from military jobs and Head Start preschools to police officers and environmental protection funding.

Election night aside, Murray’s been a senator seeking sway, not the spotlight. Multiple profiles call the former preschool teacher “low-key” and “mild-mannered.” She spends nights poring over briefing books, not swinging by parties and fundraisers, the Olympian says. But she’s used that portrayal as a political weapon. A state legislator once dismissed her efforts in 1980 to protect a preschool program as those of a “mom in tennis shoes,” and she’s been using that line as part of her own mythology ever since.

“She’s not what I would call a show horse,” says the Bipartisan Policy Center’s Bill Hoagland, a former Republican Senate aide who worked with Murray on the early years of the Budget Committee. “She’s a workhorse.” She wasn’t acerbic or boastful, Hoagland says. She just worked hard.

“Budget issues have received a lot of attention over the past few years, but the conversation is too often focused on abstract numbers and the partisan back-and-forth,” Murray told the committee in its first hearing. Pay attention to her priorities. Some things she won’t compromise on.

“I’m introducing a bill that [addresses the sequester] with additional revenues from the wealthiest Americans and responsible cuts, but we won’t allow Republicans to continue shifting the burden of our debt to the middle class,” Murray tells The Inlander in an email.

Although taxes already increased as part of the January fiscal cliff deal, Murray wants more taxes — and nothing that impacts the middle class. They’ve sacrificed enough, she says.

Don’t expect her to compromise on veterans funding or women’s health care. Last year, she stopped veterans benefits from being included in the sequester. “Patty Murray is one of the driving forces in my caucus. If she doesn’t like it, she’ll kill the bill,” Reid told Vice President Biden, according to the Washington Post.

And in a budget showdown in April 2011, when Republicans offered to avoid a government shutdown in exchange for defunding Planned Parenthood, Murray told Democrats to stand their ground.

Murray’s defense of spending has made her a target. When she became budget chair, right-wing bloggers like former Seattle Times columnist Michelle Malkin savaged Murray for her history of earmarking — funding specific local projects in large spending bills. In 2009, she ranked eighth in the Senate for the practice.

When a 2005 amendment threatened earmarks for a bridge in Seattle and the famous Alaskan “Bridge to Nowhere,” she threatened that “if we start cutting funding for individual projects, your project may be next.” Today, there’s a federal earmarking moratorium.

The sequester was never supposed to happen. In 2011, Republicans refused to raise the debt ceiling — with potentially massive consequences — without concessions on federal spending. President Obama offered a compromise. A “super-committee” would join six Republicans and six Democrats from the Senate and House to find a way to cut over a trillion dollars from the budget over the next decade.

The sequester was the “or else.” If they failed to find a compromise in time, the painful sequester cuts would automatically happen.

But as Murray served on the committee, she said she heard one name popping up over and over again: Grover Norquist. She said Republicans were “enthralled” in the spell of Norquist, the anti-tax lobbyist who’d convinced many Republicans to pledge not to raise taxes.

The bad feeling was mutual. “The Republicans are serious budget reformers; the lady from Washington,” Grover Norquist said of Murray in The New York Times, “doesn’t do budgets.”

The “super-committee” failed. Murray has said she was willing to “spill some blood” on entitlement programs, but Republicans wouldn’t budge on taxes. “I am disappointed tonight, but I am not done,” she told seattlepi.com at the time. “What I have learned in the past three months is astounding to me.”

The Budget Committee just lays out a general blueprint, leaving the nitty-gritty of expenditures to other committees. But if it can’t get the support of the Republican-controlled House, it doesn’t hold much power. The House and Senate would have to sit down and hammer together their radically different political views into a concurrent budget resolution.

Murray’s Budget seat was formerly occupied by Democratic Sen. Kent Conrad, a conservative-enough-for-North Dakota deficit hawk — and even he couldn’t make much progress with Republicans. Murray, meanwhile, was ranked by National Journal last week as the fifth-most-liberal senator. She hasn’t stopped blasting Republicans.

In a Jan. 23 statement, Murray said Republicans need to stop “hostage-taking” and begin “truly engaging in an honest effort to work with us toward the balanced and bipartisan budget deal the American people expect and deserve.” Murray says the Senate will move toward a budget, no matter what Republicans choose.

But set aside the Republicans for a moment. Marc Goldwein, senior policy director for the Committee for a Responsible Federal Budget, says Murray may have challenges just corralling her fellow Democrats. The Democrats on the Budget Committee range from Vermont’s Bernie Sanders — a self-described socialist — to Oregon’s Ron Wyden, who found a temporary alliance with Paul Ryan, of all people, on Medicare.

“On the Budget Committee, I will continue working with my colleagues on the issues that are important to them,” Murray says in an email. “But we won’t abandon our commitment to writing a budget that helps our economy grow from the middle out, not the top down.”

And even if the sequester is resolved, it’s on to the next crisis: On March 27, the resolution that keeps the federal government officially running expires. Expect Murray to be at the forefront then, too.