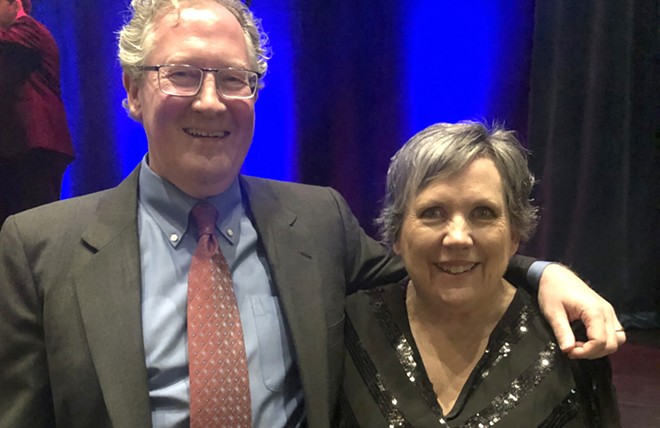 Mary Cole with Ted McGregor Jr., winner of Leadership Spokane's 2020 King Cole Luminary Award. Mary Cole is one of King Cole's daughters, and she introduced McGregor at the Leadership LIghts the Way Gala on Jan. 25 at Northern Quest Resort and Casino.

Ted S. McGregor Jr., the Inlander's founder and publisher, was awarded the King Cole Luminary Award on Saturday. The award, named after the "father" of Expo '74, was created by the group Leadership Spokane to recognize exceptional servant leadership that "lights the way" in the community; in selecting McGregor, Leadership Spokane highlighted his contributions as chair of the Riverfront Park Committee. "Receiving the award named for the man who brought us Riverfront Park in the first place is fitting for the one that is ensuring it is enjoyed for generations to come," the award citation reads. Past honorees include Bloomsday founder Don Kardong and past WSU president Elson Floyd. (JACOB H. FRIES) 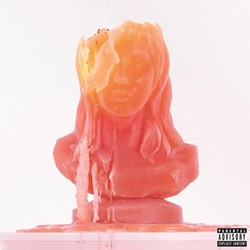 Some noteworthy new music hits online and in stores Jan. 31. To wit:

Destroyer, Have We Met. Dan Bejar leans into some New Wave stylings on songs like "Cue Synthesizer."

Kesha, High Road. Brian Wilson and Sturgill Simpson are among the guests on Kesha's fourth album.

Drive-By Truckers, The Unraveling. One of America's best rock 'n' roll bands is back with another slab of righteous guitar rock recorded at the Memphis studio where Elvis and Johnny Cash got their starts. (DAN NAILEN)

THE END IS NEAR: WHERE NO ONE HAS GONE BEFORE 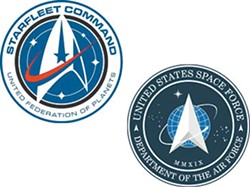 President Donald Trump recently unveiled the new U.S. Space Force logo, which bears an uncanny resemblance to another familiar space-traversing entity. The designers seemingly ripped off Star Trek's iconic Starfleet Command insignia. Maybe they were hoping the design would get sci-fi nerds excited and rallying behind what Trump dubbed the "world's newest war-fighting domain," despite the fact that Starfleet was way more into exploration, scientific research and diplomacy than in creating intergalactic conflict. (CHEY SCOTT)

ENJOY THIS GAME'S DROID, YOU WILL 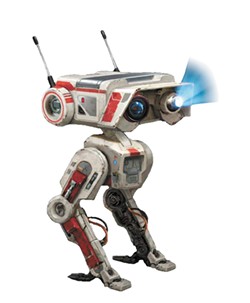 Jedi: Fallen Order, or "Dark-Side Souls" as you might call it, takes the gaming trend of difficult dodge-parry melee combatters and thrusts it into the Star Wars universe. But the best part isn't the lightsaber or Force powers, it's your adorable droid buddy, BD-1. Looking a bit like the Star Wars version of the binoculars toy from Toy Story, he rides on your back, tosses you healing stims, alerts you to the locations of secrets and, most importantly, gives you someone to talk to. You'd never even consider going to the Dark Side, knowing it would mean BD-1 chirping mournfully. (DANIEL WALTERS)

A recent fire in downtown Coeur d'Alene left six businesses at least temporarily homeless, including the Emerge art gallery and teaching space. While a fire wall protected much of the work on display, smoke damage means Emerge will have to find different digs for upcoming events. You can help them rebuild and support the artists who taught and worked there by making a donation to the gallery's GoFundMe campaign (search for "Rebuild Emerge" at gofundme.com) and watch for updates at emergecda.com. (DAN NAILEN)