Cocaine & Rhinestones, a death metal red panda and more you need to know

You don't have to be a fan of classic country music to appreciate Cocaine & Rhinestones, an addictive podcast hosted by Tyler Coe, son of legendary rabble-rousing songwriter David Allan Coe. He delves with an academic-but-entertaining approach into episodes based around, say, Loretta Lynn's fights with radio to play her birth-control tune "The Pill," or the reasons Bobbie Gentry became a mysterious one-hit wonder rather than a superstar. The first season is just 14 killer episodes, all available at cocaineandrhinestones.com, and if you find yourself wanting to learn more about the Louvin Brothers, or Buck Owens' incredible influence, Coe includes a "library" section where he recommends books on his various subjects. (DAN NAILEN)

Some noteworthy new music arrives online and in stores April 27. To wit:

POST MALONE, Beer Bongs & Bentleys. The young rapper/singer got Nicki Minaj and G-Eazy to guest on his second album, which already boasts No. 1 single "Rockstar."

I'm not a huge fan of anime, but Netflix's Aggretsuko was a nice surprise. The story follows Retsuko, a red panda who deals with the struggles of her office job by secretly singing death metal karaoke. If you're looking for a workplace comedy with cute Hello Kitty characters aimed at an adult audience, then your tastes are oddly specific. The show's short, relatable and easy to binge in an afternoon, and definitely worth checking out. (ERIC SCHUCHT)

You might remember a few years ago when the Spokane Arena asked area residents who they'd like to see play on Spokane's biggest indoor stage. No less than 23 artists from the original 2014 list have played Spokane in the years since. Well, the "Bucket List" is back, and you can tell the Powers That Be who you want to see by visiting spokanearena.com/bucketlist. You have until May 9 to put out the call for Beyoncé, Bruno Mars, Bruce or your personal faves. (DAN NAILEN) 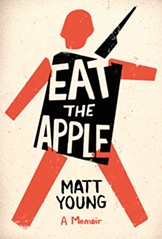 Boredom, fear, machismo and masturbation. That about sums up a deployment to a conflict zone from a grunt's perspective, and that's what I love about Eat the Apple, a new book by Marine Corps veteran and Centralia College English instructor Matt Young. Starting off in boot camp, Young's book walks through three tours in Iraq and what it's like to return back to the "real world" with sand still in your hair. He writes via email: "Stories and experiences don't always have a moral, they don't always need to teach us something, and that it's actually the reflective process afterward that's the important part and less the experience being had." (QUINN WELSCH)