On the other side of the world, Dr. Norman James has found life to be completely different — in a way that keeps him coming back 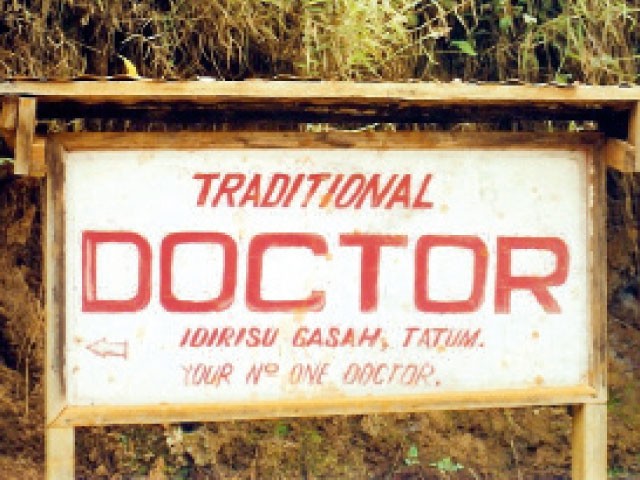 In Cameroon, many have to rely on "traditional" doctors, who are not trained in modern medicine.

It’s a sunny day on Shady Slope in north Spokane. Dr. Norman James — a plastic surgeon and hand surgeon — and his wife, Theresa, sit under the shade of an umbrella in their backyard and sip orange punch, talking about their work, their calling and the foreign country they love.

They’re a long, long way from Cameroon. It’s a different world, over there. Some ways worse, some ways better.

For starters, the orange punch, say the Jameses, can’t compete with Djino, a delicious Cameroonian drink made from cane sugar, mixed with grapefruit and pineapple.

There’s no denying that Cameroon’s a beautiful country. It could be one of the world’s prime tourist destinations, Norman says, if it weren’t for the overwhelming poverty. Unsurprisingly, medical care in Cameroon isn’t exactly state-of-the-art.

“The care is absolutely dirt-cheap by our standards,” Norman says. “But it strains their economy to provide for rudimentary care. It’s almost medicine by disaster.”

Many Cameroonians can’t afford the $100 it takes to get a hernia fixed. And if you can’t pay, most Cameroonian hospitals won’t serve you. Norman describes a woman in labor desperately in need of a C-section. But because she couldn’t pay, the hospital — a Catholic hospital, even — refused to help her.

Cameroonian hospitals are strictly BYOB — bring your own bedding. Food as well. Need an MRI? Buy a plane ticket to the United States.

It’s exactly the type of place that Norman James has long wanted to help.

In 1963, Norman met Dr. Tom Dooley, a non-sectarian, self-appointed missionary to Laos. Dooley was dying of advanced cancer, but that hadn’t stifled his enthusiasm for helping the needy. To Norman, Dooley’s passion proved infectious.

Over the course of four trips to Cameroon, Norman has fixed cleft palates, reconstructed burn-crippled limbs and removed tumors from faces.

“You can get most of these people back to a functioning state,” Norman says.

But Cameroon needed more than a plastic surgeon. Its medical establishment needed a surgeon who could do a little bit of everything. Fortunately, Norman had been trained in general surgery. Not so fortunately, that was 40 years ago.

Two West African general surgeons helped him refresh his skills. Soon, for the first time in decades, Norman found himself fixing hernias and performing C-sections, taking calls for general surgery every other night.

“Oh, it was a distinct challenge,” Norman says. “I had a good backup surgeon behind me. I’d call for help, and he’d bail me out.”

Of course, asking for help isn’t all that simple in Cameroon. Along with French and English, 24 other tribal languages are spoken. “There’s nobody who’s polylingual, who can speak everything,” Norman says. Instead, everyone in the country serves as interpreters for each other. Sometimes a sentence must be sent through back and forth through several interpreters, crossing multiple languages, before it can be understood.

“Many conversations around you, you will not understand. If they look at you and start laughing, you know they’ve said something about it,” Norman says. “The people recognize we put our foot in our mouth frequently, but they are very kind.”

Kindness and a genuine openness are hallmarks of Cameroonian culture that keep the Jameses coming back. Norman notes, for example, that no one in the United States stops by your door randomly to give you a chicken. But they do in Cameroon.

“We feel very definitely called to be there,” Norman says. “When the times get tough and finances are short and it’s raining again, knowing that we belong there keeps us going.”