What is the sound of circus clowns robbing banks? Pow! Biff! Bam! 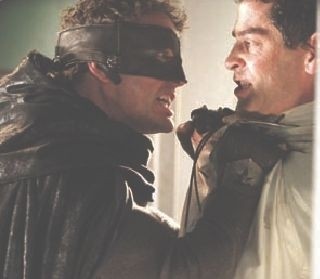 I thought I knew the problem with The Cape after its two-hour pilot. It didn’t seem to have enough room to breathe. In less than 15 minutes, we met Vince Faraday (David Lyons), learned he was a good cop, learned the police force was corrupt. We watched a super-villain named Chess blow up the police chief. We learned Faraday’s partner was going to defect to a security company that plans to privatize the corrupt police force. Faraday considers joining the company but does some digging around and realizes they’re way more evil than the cops. To whit: Faraday is framed for killing the chief, chased around a train yard, blown up in a train car (or so the world thinks) and recruited into a gang of bank-robbing circus folk (?!?!!), who bequeath him a magic cape, so that he may become a superhero and 1) stop the bad guys and 2) restore his son’s faith in humanity.

Fifteen minutes. Read back over that list. That’s two episodes’ worth of material right there. And in that time, there were moments of wacky brilliance. At least on first appearance, those bank-robbing circus folk are every bit as strange and interesting as you’d expect them to be. Everything happens so fast, though, that it’s impossible to enjoy any of these people, and it’s doubly impossible to appreciate the world that’s being built.

So that was going to be my beef. In the second week, though, The Cape — despite having its characters sketched and its larger story arc in place, and despite having room to breathe — didn’t get any better. Further, it lacked anything to rival those manic first moments inside the circus. So, I guess, that means it got a little worse.

Aside from the postmodern-ish twist of having a dad pretend to be his son’s favorite comic book character while stopping real-life bad guys, The Cape wants desperately to be a golden-age comic book, full of excessive earnestness and the pow-biff-bam escapism that typifies the genre.

They’ve got the over-earnestness on lock. Now, if only someone — Lyons, Summer Glau, the writers, anyone — would have a little fun, NBC might have a show worth watching.

Portlandia
Saturday Night Live cast member Fred Armisen, 44, and former Sleater-Kinney rocker Carrie Brownstein, 36, skewer the Northwest’s hippest city and, in the offing, attempt a takedown of hipsterdom from the oldest end of its age range. Expect funny skits that skewer things like the competitive nature of book-reading (search for “did you read?” on YouTube) while worrying that it’ll all just devolve into reverse ageist schlock about how hipsters are copying a 20-year-old Richard Linklater film (YouTube “dream of the ‘90s”). (Fridays, 10:30 pm, IFC)

Being Human
How do you marry the public’s insatiable appetite for melodrama with our current kitschy love of vampires, werewolves and the paranormal? Create a drama about roomies who are a vamp, a lycanthrope and a ghost, naturally. (Mondays, 9 pm, SyFy)

RuPaul’s Drag Race
Finally! A reality show concept we can get behind! For the third season, the world’s most famous drag queen searches for a protégé fit to walk a mile in Ru’s enormous spiked heels. (Mondays, 10 pm, LOGO)