A TV reporter-turned-businesswoman, a Christian pastor and others looking for their turn on Spokane City Council 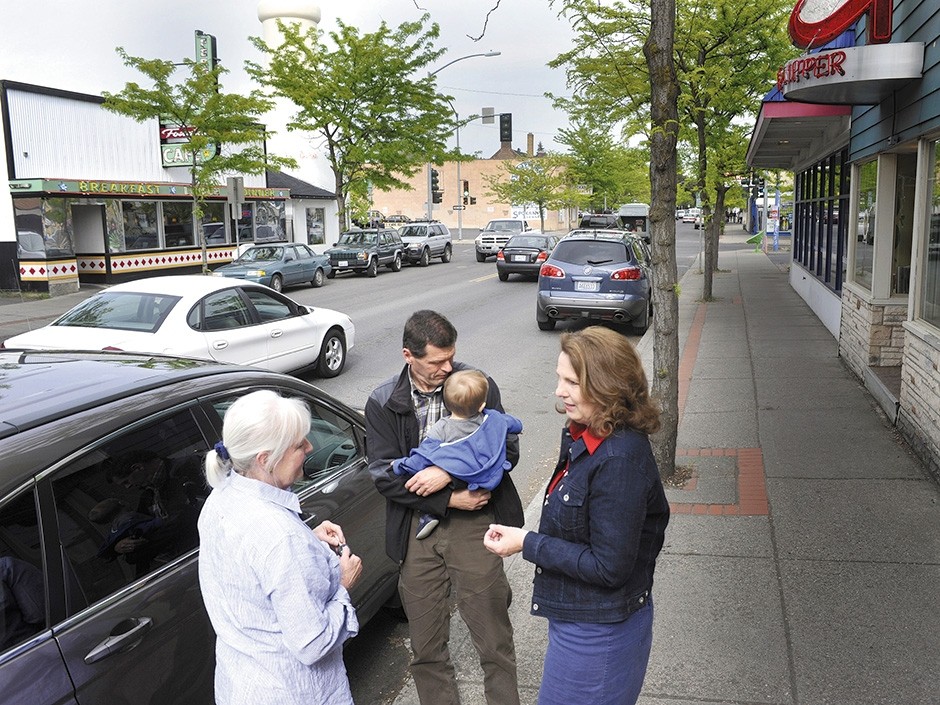 Candace Mumm, right, is seeking the council seat being vacated by Nancy McLaughlin.

As the deadline to file for November’s local elections passed quietly Friday, each of the three Spokane City Council seats up for grabs attracted a fight, and one had already garnered more than $50,000.

For the seat being vacated by Nancy McLaughlin because of term limits, two polished politicians are campaigning with support from often-opposing local powers: Candace Mumm is supported by City Council President Ben Stuckart, and Michael Cannon, who was on Mayor David Condon’s transition team, has received a $500 contribution from the mayor. Mumm and Cannon each have raised more than $20,000.

Stuckart has clashed with the mayor and more conservative council members, including McLaughlin, over pay increases for city management, vacancies in the police and fire departments and other city budget cuts. This year’s elections have the potential to solidify the council’s conservative majority or tip the scales toward Stuckart’s more liberal bent.

Mumm, a former TV journalist and president of the city’s Plan Commission from 1999 to 2009, owns a property management company. Over a half-caffeinated Americano, she says she’s focused on road and sidewalk improvements, fire response times and economic development in neighborhoods like Garland and Monroe. Mumm says support from businesses and the local firefighters’ union show she’s independent and can “get past some of this partisanship.”

Cannon is chair of Spokane’s Housing and Human Services Board, which allocates money to some neighborhoods and social programs that help low-income or homeless people. He says the issues facing his district are indicative of the whole city: bad streets, the need for more cops and “spending money wisely.”

“There are still some concerns over the value of what we invest in in general,” he says of public safety spending. “I’m a big advocate for increased resources, but with the idea of spending money wisely.”

Cruz, who’s quiet but straightforward, grabbed attention last year when he controversially supported West Central being an alcohol impact area, which prohibited the sale of high-alcohol beers there. Cruz argued the distinction kept the neighborhood safer and helped keep alcoholics and drug addicts from drinks that could harm them and cost the city money for emergency response. Cruz lost that fight, but says he hopes a seat on the council could give him a pulpit to advocate for poorer and less represented areas of town like West Central.

A fiscal conservative, Fackler is focused on issues he can push — but not necessarily govern — from a council seat. He wants police guild negotiations to be public, to remove libraries from the city’s budget and for the state to stop charging sales tax when agencies like public schools buy things, in order to increase the money they have to spend. Lawmakers can find a way to fill the the resulting hole in state revenue, he says.

“You fight the battle where you can,” he says.

Hamilton says he opposes the council spending time on votes on social issues that aren’t within city power, and thinks they need to focus more on “fiscal responsibility.” He worries Waldref is focused too narrowly on her neighborhood instead of the whole district or city.

“You can’t help but like Amber,” he says. “She’s a nice girl, but I believe that her leadership is misguided.”

Hamilton wants to promote incentive programs — like breaks on permitting costs — to attract more business to Spokane. Tax revenue from more business, he says, can pay for more cops and a citywide program that would reduce domestic violence by sending counselors with police on those calls.

But first he’ll have to overcome doubts about whether he actually lives in the district he wants to govern. A lawsuit filed by two district residents Tuesday challenges his residency, and local media have reported the house he owns in the district is dilapidated and uninhabitable, without furniture or basic fixtures. Enraged by the coverage, Hamilton says he is remodeling the house and will move back in within “a matter of days.” Hamilton says he bought the $20,000 house at 217 E. Pacific last June specifically to run for City Council in the district and has put $40,000 into it since.

“I took a home that … could have been torn down but had great bones, and I made it worth five times the investment,” he says, “and that’s how I’ll treat the city.”

District 2 Councilman Jon Snyder faces a challenge from former state Rep. John Ahern, a Republican who served in Olympia for a decade before returning to Spokane because of his wife’s health problems. Over coffee at a South Hill diner, Ahern struggled to point out anything specific about Snyder that has dissatisfied him, but says he would focus his term on cutting taxes and regulations. He says he’d convene a group of business representatives to determine which regulations to target.

LaVerne Biel, a 30-year Perry District resident who co-owns a company that installs business telephones and data networking systems, says she’s in the race to bring a broader perspective than Snyder. She says he’s focused on specific issues like bike lanes when he should be focused more broadly on issues like pedestrian safety.

“I see it as probably taking a broader brush stroke on citizen issues,” she says.