Young Kwak photo
When you want your ska/punk/swing band to go classical, who you gonna call? Try the Spokane Symphony's David Armstrong.

David Armstrong grew up listening to "almost entirely classical music," which makes sense considering his mom was a violinist and he started on the instrument himself when he was five years old and growing up on the West Side.

Even with that laser focus that took him to a master's degree in music performance and his current role as assistant principal second violinist with the Spokane Symphony, the 36-year-old Armstrong still knew about the Cherry Poppin' Daddies — at least tangentially.

"They were really big when I was growing up," Armstrong says of the Eugene-based band. "I don't know if it was just a Northwest thing, I assumed they were known nationally ... It was definitely a name I was familiar with growing up."

Indeed, the Daddies were a bit of a regional phenomenon in the punk and ska scenes well before a sonic swerve into swing music in the late '90s made them platinum-selling international stars. And while the so-called "swing revival" only lasted a couple of years, the Daddies kept right on chugging, with bandleader Steve Perry leading a seemingly ever-changing lineup through all manner of musical styles — everything from jazz to blues, psych-rock to lounge, and then some — on albums and tours in the years following their 1997 mainstream breakthrough album Zoot Suit Riot.

This weekend, Armstrong's classical expertise and the Daddies' diverse catalog have a chocolate-in-my-peanut-butter moment as the band plays its first-ever show backed by a symphony, joining the Spokane Symphony Saturday night and using classical arrangements created by Armstrong over the last year.

The Daddies' Perry says the symphony-backed version of the band has been a long time coming. Literally.

"We were asked in 1998 to do a Boston Pops show, but we were in Europe so we didn't do it," Perry says. "That was the first inkling that we would do something like this. A lot of bands of our ilk have done some of these shows, but it actually fits us better ... A lot of our material has had classical aspects to it. We used string quartets, and some of our slower songs have these long arrangements. So we're seizing this opportunity." 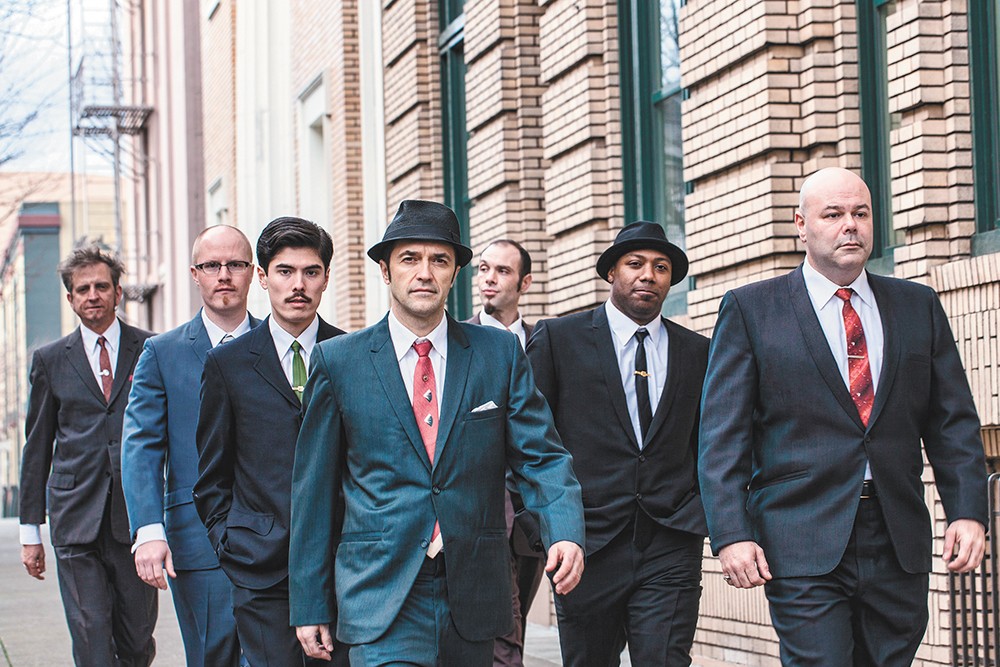 Rod Black photo
The Cherry Poppin' Daddies look like they'll fit right in with an orchestra.

The show Saturday won't be exactly what you might expect; rather than simply a Cherry Poppin' Daddies show backed by the symphony like some pops performances, the audience will get to taste a couple different flavors of the Daddies' treats. Half the show will be the Daddies on their own, and half will be with the symphony and Daddies playing together with Armstrong's arrangements.

Choosing which songs to play in which portion of the show has been a big part of Perry's thinking as he coordinated this show. The swing-heavy music of the band will mostly be played just by the Daddies, since that style is "tight and punchy" and "a little tougher to integrate" with the symphony's abilities in an interesting way. But the more expansive side of the band, the side capable of veering in dramatically different directions, is the one Perry wanted to focus on with Armstrong and the full orchestra.

"The Daddies are basically all about arrangements that add to the song," Perry says. "The music is not just a backdrop for the music, it's never been that way. So a lot of the tunes [I chose] are the ones where the music does something interesting and where I think the orchestra can really shine, can bring out the depth of the music."

For Armstrong, the challenge of working up the Daddies' music for the symphony was two-fold. On the one hand, he had to take the songs Perry sent him and create rather straightforward arrangements that essentially follow the same path as the originals.

"Almost all of the work I've done has just been by ear, listening to the recordings and writing it out," Armstrong says. "When one does [music] theory in college, you also do training where you're listening to music and figuring out what it is that you're hearing, to the point where you can just write out the music by listening to it."

But the Daddies weren't interested in simply having a symphony play along in the background of their songs. They wanted to push some of the music in new directions, and that was Armstrong's second challenge: Actually composing new parts from thin air that would showcase both the symphony and the Daddies.

"In that aspect of it, it felt a little bit more along the lines of actual composition and not just strictly orchestrating or arranging the music itself," Armstrong says. "It's one of those things where you don't always have a clear idea of what it is you want to do ... There were different songs or portions of songs that every once in awhile I'd get kind of stumped and have to take a little break and come back to it."

Armstrong and Perry swapped files back and forth, and Armstrong has heard the final arrangements on his computer, but neither will know exactly how the Daddies and Spokane Symphony will sound together until the band arrives from Eugene for rehearsals before Saturday's show.

Armstrong says he has a pretty good idea of what the show will sound like, but notes "there's always those things that end up sounding a little bit different" on stage. Perry, for his part, is excited to hear songs that, in his head, were always meant for the symphonic treatment they're getting from Armstrong.