The adult coloring book trend isn't a passing fad yet, and local artists are joining in on the trend 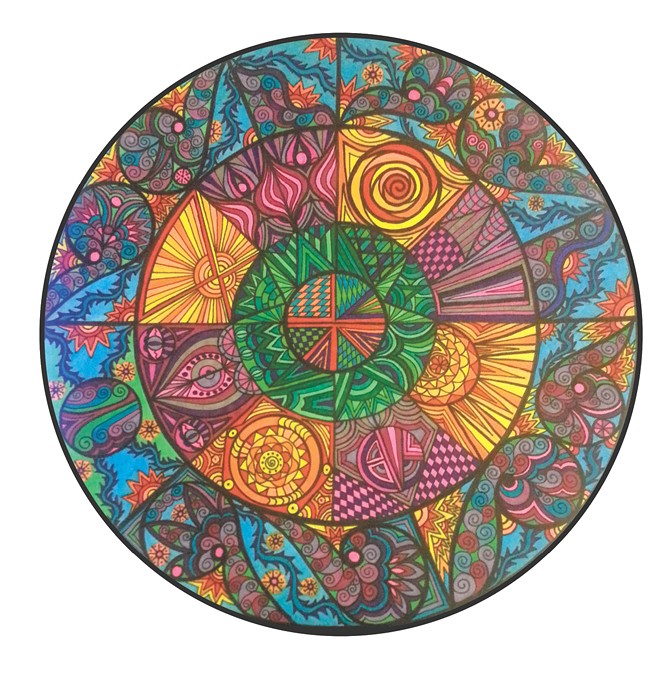 Like anything that's hot right now, this too could become passé in six months.

But so far, coloring books designed and marketed to adults as a relaxing, creative outlet seem to possess a staying power that's managed to steal attention away long enough from ceaseless digital distractions.

Complexly designed, black-and-white coloring books for older audiences — essentially teens all the way to retirees — emerged in the book and craft markets a few years ago, and continued gaining popularity throughout 2015. The analog hobby, touted as a way to relieve stress and even increase mindfulness, is bigger than ever. In 2015, more than 12 million coloring books for adult audiences were sold. During the first half of 2016, Publishers Weekly reported that the adult coloring book market was helping bolster nonfiction category sales more than the same period in the previous year.

At Auntie's Bookstore in downtown Spokane, coloring book titles overflow from a centrally located table onto revolving racks, and that's only one of the three areas in the store where these products are displayed, points out Auntie's employee Cathy Routen.

Around the corner are shelves of large-format coloring books, including Disney princess titles (again, this is a product marketed to adults) and collections by one of the first and most popular coloring book artists, Scottish designer Johanna Basford. Her 2013 release Secret Garden: An Inky Treasure Hunt and Coloring Book, and subsequent titles, are widely credited with propelling the once-niche hobby to a mainstream obsession.

In another spot to the right of the Liberty Building's stairs inside the bookstore, shelves are filled with branded pop-culture coloring books for fans of Game of Thrones, Star Wars, Jane Austen (pretty English countryside scenes featuring book quotes), Tolkien, Harry Potter, Marvel, Star Trek, Dr. Who — you name it, there's a coloring book for it. David Bowie's even got one. Perfectly sharpened sets of colored pencils and varying types of markers are conveniently displayed nearby.

If you're not keen on coloring in Luke Skywalker's drab garb, or trying to stay within the lines of highly detailed botanical scenes, Auntie's stocks plenty of volumes filled with abstract patterns and mandalas. Incredibly popular to color in, mandalas are circular, usually symmetrical designs that hold spiritual symbolism across cultures and religions.

Before adult coloring books took off, Spokane artist and art teacher Connie Janney began hosting local workshops where participants could draw their own mandalas, or color in her original designs. Janney says that she was drawing and coloring mandalas decades ago, even before she understood their spiritual meaning.

"The reason I started on it was because I'd read a book about Carl Jung, and he used mandalas as a type of therapy," Janney explains. "He was like the first art therapist, and he used the circle as a representation that could become a very esoteric or a meaningful experience."

In the past few years, Janney has created seven mandala-themed coloring book titles, each containing 20 original designs. She self-publishes and sells the books locally at art shows and other events she participates in, as well as own her website.

Some reports on the adult coloring trend suggest that it's heavily fueled and supported by social media, where professional artists and amateur colorists alike are able to share their final results for all to see. Likewise, retailers marketing products that carry a heavy allure of nostalgia for adults who enjoyed such things during their childhood (the "Peter Pan" market, as it's referred to) perhaps has also contributed to the coloring boom.

Janney, though, believes the act of coloring in complicated designs has become popular because it allows people who don't think of themselves as creative to fully immerse themselves in art, and feel like they've accomplished something at the outcome. (Interestingly, this mindset is also commonly expressed by people who've jumped into another popular creative trend, guided paint-and-drink classes.) The barrier of entry for coloring also remains relatively low, at the cost of a pack of pencils, crayons or pens, which greatly varies, and something to color; for context, Basford's popular series sell for $10 to $15 each.

"People find that they've had an enjoyable time, and they get very into it," Janney says. "Even if they say 'I can't draw a straight line,' or 'I'm not artistic,' they'll sit and color something in and be so proud of themselves when you hold it up for them. Many people take them home and frame them." ♦

Zach Grassi | The artist behind the kitschy Burgleteens "designer plush" company that creates and sells other handmade oddities also designed a spiral-bound coloring book of fun designs that all ages can enjoy. It's filled with adorable smiling food — tacos and sushi rolls — along with detailed, geometric designs. $25; find it at Boo Radley's, 232 N. Howard. burgleteens.com

Harold Balazs | One of Spokane's most famous artists, known for his geometric sculptures installed across the region, recently published a limited edition, large-format book of bold-lined, abstract designs to color and possibly frame. $30; find it at Atticus Coffee & Gifts, 222 N. Howard; or at the MAC Museum Store, 2316 W. First.

Connie Janney | This longtime Spokane artist and art teacher has published a series of seven mandala-themed coloring books, each featuring 20 original designs. $10 each; find them online at conniejanney.com