As the influence and activism of some city council assistants has grown, they've become a new target for conservative critics 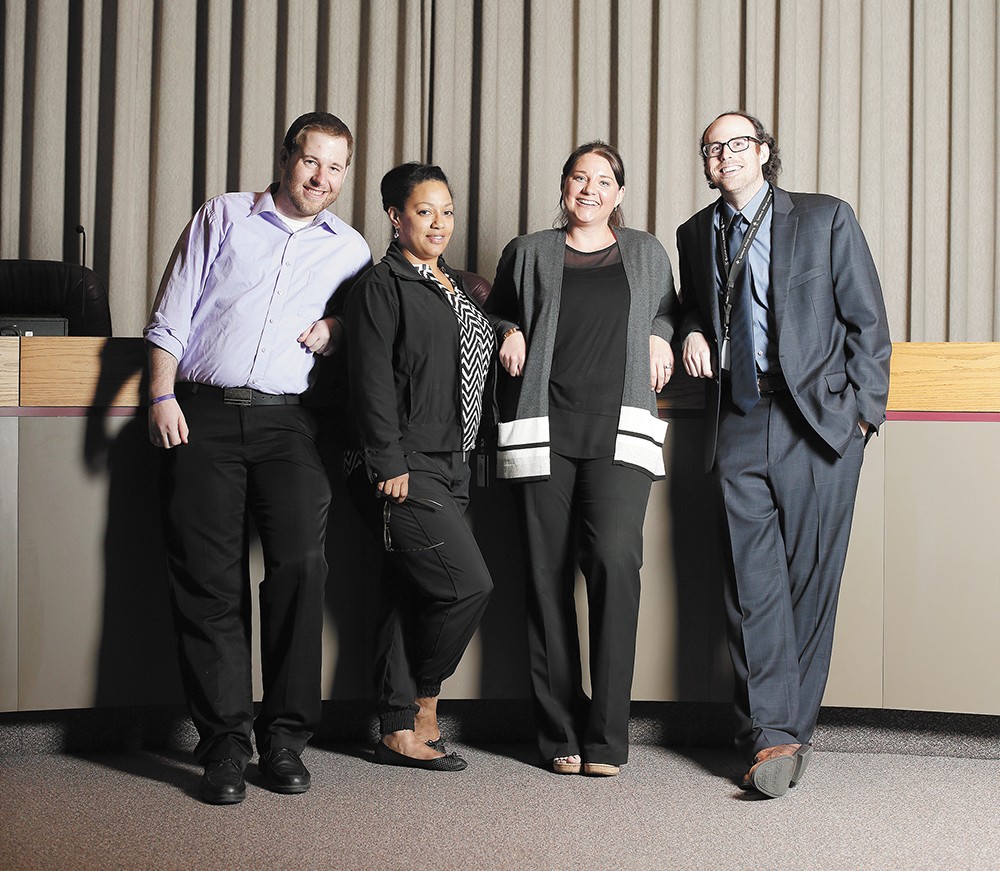 Adam McDaniel, in a suit, tie and dusty Mariners cap,

jokes in his Alabama drawl that he's "not the House of Cards guy," referencing the Netflix political drama rife with behind-the-scenes scheming.

But there's no question that, as the legislative assistant for Spokane City Council President Ben Stuckart, McDaniel has major behind-the-scenes influence.

For those most critical of the current liberal-leaning city council, they're obvious targets.

"[McDaniel's] so brazen about the stuff that he does and he's so condescending in his opposition, he's a target," says Michael Cannon, a local business owner who lost the 2013 council race to Candace Mumm. "He's mouthy and condescending and belittling."

Attacks on council assistants represent a long-running philosophical battle about the role of the councilmembers and their assistants. Last week, Cannon filed an ethics complaint against McDaniel, accusing him of a conflict of interest for how he was running McDaniel Projects, a political consulting firm.

"I feel like we've become more of a target by proxy, for our councilmembers," McDaniel says. "I think it's partly a nature of the political process in 2016."

Back in 2007, the Spokane City Council felt the move to the strong mayor system of government had left the council handicapped, compared to the city administration.

As a result, the council voted to hire a part-time staff member for each member to help them research legislation, answer constituent questions and schedule meetings. Over the years, the council gradually ratcheted up their hours and pay. By 2014, the council's legislative assistants had become full-time, and were actually being paid more than the councilmembers they assisted.

The fight over that expansion got brutal at times: In the midst of the recession, some conservatives took issue with the expanding cost of the council. Former Councilman Steve Salvatori refused to take on an assistant — and then faced an ethics committee inquiry over how he'd spent the budget earmarked for his legislative assistant instead. And when former Councilman Mike Allen refused to support the move to make assistants full-time, Stuckart threatened to kick him off the Park Board as a consequence.

Stuckart says as the council has changed from a "rubber-stamped, part-time council to a council that is trying to work as hard as we can to pass as many policies as we can," the legislative assistant role also has changed.

"It was more secretarial and now it's become more policy based," Stuckart says.

In particular, McDaniel argued that small businesses shouldn't be exempted entirely from the policy. In the end, he was successful. Next year, most small businesses will have to offer at least three sick days.

Stuckart and McDaniel don't always agree — Stuckart fervently opposed the Spokane Worker Bill of Rights, while McDaniel endorsed it. But Stuckart credits McDaniel for constantly pushing him on causes like the environment. "I would say Adam keeps me honest," Stuckart says.

Most of the council can name specific issues their assistant has helped to catalyze or influence. Legislative assistant-turned-councilwoman Lori Kinnear says her assistant Grifynn Clay has helped to drive forward proposals on topics like human trafficking and property crime. That's exactly why she hired him: to challenge her.

"I hired a partner, not someone who was going to be a secretary," Kinnear says.

It's activities outside their official duties that have exposed council assistants to the most criticism. Cannon's ethics complaint accuses Stuckart's assistant of improperly using his city job to benefit McDaniel Projects, the consulting firm McDaniel started last year to dive into voter data for political candidates. So far, McDaniel's single official project with the firm has been to assist Kinnear with her 2015 city council race.

"I find it fascinating that nobody has any dirt on me, so they're going to go attack Adam," Stuckart says. "Come after me, don't come after my aide."

Stuckart points out that the ethics code specifically allows for participation in politics while not on the clock at City Hall.

But Cannon says his objection isn't with McDaniel working for other campaigns. His issue is that the McDaniel Projects website lists McDaniel's specific city council accomplishments, including the sick leave policy, as if they were accomplished by the consulting firm, as opposed to simply by McDaniel as a city employee.

If the accomplishments had been listed on McDaniel's personal résumé, rather than his firm's résumé, Cannon says he wouldn't have a problem with it.

McDaniel shrugs this off. "I'm not guilty of an ethics violation," he says. "Is he making a recommendation for me to edit my website? OK, maybe."

Cannon's scrutiny goes beyond the ethics complaint. On April 7, he made records requests between Stum and McDaniel on various policy topics — they've turned up 1,300 emails. He's already received 664 pages of Stum and McDaniel's internet history since 2015.

"My thought is they're openly politicking on city time from the council office," Cannon says. So far, he says, he hasn't gone through it all to find if there were any violations.

To understand why Stum and McDaniel have been in the crosshairs of conservatives, you have to turn to Facebook and Twitter.

"You know you're doing something right when businesses outside of Spokane are begging the Council to not adopt a paid sick leave law," McDaniel wrote on Twitter in January.

When Sweet Frostings bakery was quoted in a TV story, concerned about the impact of the sick-leave policy on their business, McDaniel fired off a joke with the premise that the business was rife with illness.

"I really enjoy the peanut butter and flu as well as their strep throat strawberry cupcakes," he tweeted. "They're delicious."

Today, McDaniel acknowledges that the tweet was probably inappropriate. On the "Spokane's 8th Man" Facebook page, where the council's most vehement conservative critics gather, the screenshot of the tweet resurfaces frequently.

Stum, too, has waded into the Facebook commenter fray.

"I'm one of those people, when I say something, I say it with a microphone or bullhorn," he says.

Stum simultaneously chairs the city's Human Rights Commission, which, among other things, has argued that Spokane's current sit-and-lie and transient shelter ordinances amount to criminalizing homelessness. He's sparred publicly with the county sheriff over police militarization.

"He called me a bomb thrower," Stum says.

So far, however, it's only been a council critic who's paid the price for incendiary online comments. Local businessman Evan Verduin frequently argued with McDaniel online while running against Karen Stratton for city council last year. This January, Verduin was kicked off the city's Plan Commission after he promoted his Facebook post calling Stratton a liar and a "contamination."

It's not surprising that many of the council assistants are willing to wage political battles publicly. Most of them have come from politics.

McDaniel, Clay, Stum and Kaitlin Larson — Amber Waldref's legislative assistant — had all worked on political campaigns before being hired by councilmembers.

The political tinge to the council assistants hasn't been confined to one side of the aisle.

In 2010, conservative councilwoman Nancy McLaughlin brought on as her assistant Edie Streicher, who'd been serving as the government affairs director of the Spokane Home Builders Association, arguably the region's most influential conservative lobbying group.

But today, Councilman Mike Fagan, the council's sole remaining conservative, has taken a different tack. Anna Everano wasn't a campaign manager or a lawyer or a former city councilmember.

"I was never one who paid much attention to politics at all," Everano says.

Her last job was as a waitress at Dolly's Cafe.

"[The other councilmembers] like assistants who are, for lack of a better term, political operatives, or politically experienced," Fagan says. "I don't."

Fagan says that was intentional. He says that he doesn't have a shot of getting many of his policies passed with the rest of the council lined up against him. Instead, he's made getting to know his constituents his primary mission — and he wanted someone who could help him do that. "I found somebody who I thought excelled in that customer service orientation," Fagan says.

Stuckart, however, sees the sort of political moonlighting work that McDaniel does to help liberal candidates win council races as an inexorable part of their success.

"My job, absolutely, is to pass policy," Stuckart says. "That means I get like-minded candidates." ♦