The deadly alien returns to Earth in The Predator, a disappointing continuation of a stalled franchise 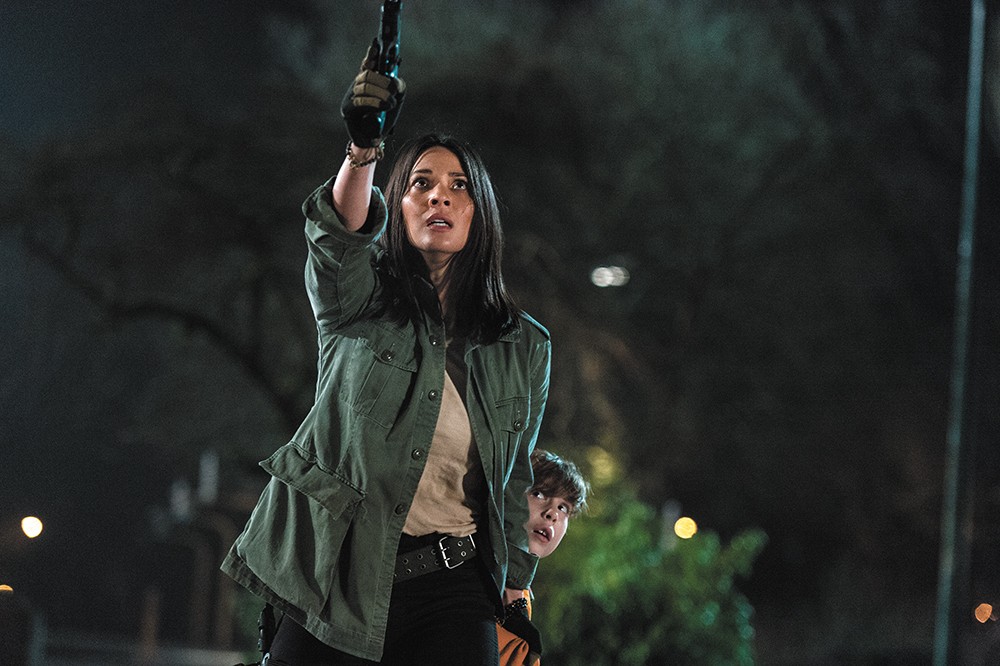 Olivia Munn has proven she can take down predators onscreen and off, but she's underserved in Shane Black's muddled sci-fi sequel.

The Predator's motivations could not be simpler: It's an alien sport hunter, "like a bass fisherman" as one of the characters in Shane Black's new film The Predator describes it. It hunts and kills humans (and other sentient creatures across the galaxy) for pure enjoyment, with a set of guidelines that make the experience more challenging (and ethical, in a twisted sort of way). It doesn't need a grand mythology or a universe-conquering agenda to be scary. But Black gives it one anyway in The Predator, which is the fourth movie in the franchise (if you don't count the two Alien vs. Predator movies, which you definitely shouldn't).

In 1987's Predator and 1990's Predator 2, the Predators came to Earth to hunt humans, while in 2010's Predators, the aliens transported humans to a "game preserve" planet to hunt them there. This time around, the Predators are having some kind of space battle as the movie opens (with a grand, very Star Wars-sounding musical score), and one crash-lands on Earth in the middle of a jungle that looks a bit like the one from the original movie. There it encounters Quinn McKenna (Narcos' Boyd Holbrook), an American black-ops military sniper whose entire team is quickly dispatched by the Predator.

The Predator faced off against a similar elite military unit (led by Arnold Schwarzenegger's Dutch) in the first movie, but Black (who played a small part as a member of that original unit) quickly switches gears here, moving the action to the United States, where McKenna is being held by the nefarious government types who always show up in movies like this when aliens land. Sterling K. Brown plays the head government goon with a gleeful amorality that makes him the most entertaining character in the movie — and a better villain than the Predator, who escapes from captivity and starts killing background extras in a less-than-sporting manner.

McKenna escapes, too, along with steely scientist Casey Bracket (Olivia Munn) and a ridiculous band of misfit military rejects who were en route to a facility for the mentally unstable. Black (who co-wrote the screenplay with Fred Dekker) clearly has a lot of affinity for these guys, but they're not nearly as funny as he thinks they are, and their socially awkward shtick wears out its welcome pretty quickly. This ragtag crew heads to a nearby suburb to rescue McKenna's autistic son Rory (Jacob Tremblay), who's figured out how to use some of the Predator tech that his dad smuggled out of the jungle, and has inadvertently summoned an even bigger, meaner, more dangerous Predator.

That makes for a lot of characters to keep track of, and the movie loses sight of them at various points, sometimes within the chaotic action sequences, which have nothing on the intense battles in director John McTiernan's original. Black jumps into the action right from the beginning, but the movie is erratically paced, with sporadic lulls and a jumbled, confusing finale (followed by a laughable sequel-baiting coda). Holbrook has some decent action-hero swagger (if nothing else, he's a vast improvement on Predators leading man Adrien Brody), but Munn steals his thunder pretty much any time she's on screen, making a strong case that her snarky, resourceful and surprisingly lethal Casey should have been the main character.

Black has done his best work on his original noir-style action-comedies Kiss Kiss Bang Bang and The Nice Guys, but he isn't as effective when trying to integrate his rapid-fire banter and shaggy-dog plotting with the demands of a franchise blockbuster. It worked out better for him in 2013's Iron Man 3, but since Predators aren't really keen on witticisms, most of the glib dialogue falls flat here. As threatening as the Predators are, there isn't much urgency to the story, and Black's reliance on goofy touches (including "Predator dogs" that behave like deadly, overgrown puppies) undermines the potential menace.

Instead of the laidback cool of Kiss Kiss or Nice Guys, The Predator is constantly strained in its efforts to seem like a rollicking good time. The simplicity of an implacable alien hunter tracking down its human prey gets lost under a whole lot of noisy chatter and incoherent action movie nonsense. ♦

The Predator is not showing in any theaters in the area.