The enduring appeal of a gal named Sue 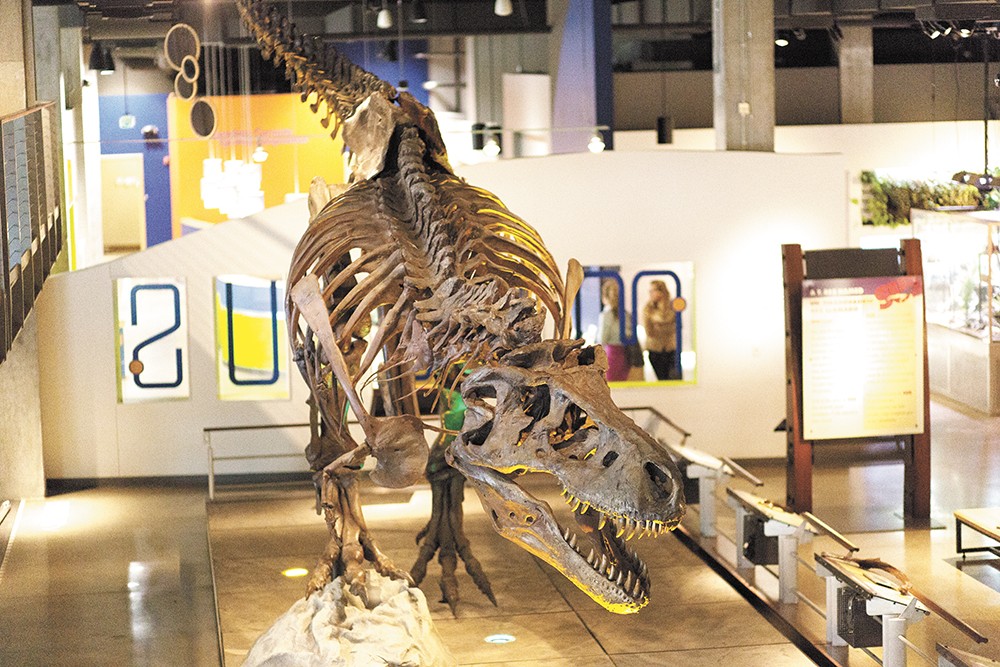 Young Kwak
The fossil replica of Sue the T. rex required seven people and a forklift to assemble.

dinosaurs captured my imagination early on. Prehistoric-themed coloring books, plastic figurines and Land of the Lost Saturday morning reruns were all hugely important in my early development. And like many kids, the fascination waned, and new obsessions like baseball and bike-wheelies overtook fantasies about Velociraptors, Iguanadons and, of course, the Tyrannosaurus Rex that made the opening credits of Land of the Lost so exciting.

But this year, my curiosity in the ancient animals was reignited by a movie, and no, it wasn't the latest remake of Godzilla. Even the presence of Bryan Cranston at the height of his Walter White hype couldn't lure me to that flick.

Rather, it was Dinosaur 13, a documentary that premiered at the Sundance Film Festival in January and trickled into art houses across the country in August. The movie tracks the 1990 discovery in South Dakota's Black Hills of the most complete T-Rex fossil ever found. Amateur paleontologist Sue Hendrickson came across it when she was out on one of many regular excursions with a pair of commercial fossil-hunting brothers, Peter and Neal Larson.

Dinosaur 13 not only documents the discovery and excavation of the T-Rex — named Sue in Hendrickson's honor, and most remarkable for being 90 percent intact — but the complications that arose when the federal government found out the fossil was discovered at an odd intersection of federal, tribal and private lands. That led to a bizarre sequence of a federal raid of a small-town museum, criminal trials and lawsuits, and ultimately the auctioning off of Sue to the highest bidder — an odd alliance of McDonald's and Walt Disney World that ponied up $8.4 million on behalf of Chicago's Field Museum of Natural History.

That's where Sue now resides, on public display since 2000. There's also a cast replica that tours the country in an exhibit called A T. rex Named Sue, and it opened last week at the Mobius Science Center, seven years after it last visited Spokane for a four-month stay at the MAC.

Mobius CEO Phil Lindsey has only been at the museum about six months, but he isn't worried that a return engagement will prove any less exciting, given that seven years ago "was a whole other generation of children." Seeing the 3,000-pound fossil replica take over the 10,000-foot Mobius gallery space — Sue's tail nearly scrapes the two-story ceiling as she "bows" toward visitors — made Lindsey recall his own childhood obsession with dinosaurs, and how that affected his career.

"What appealed to me as an 8-year-old was that they were giants and vicious and primal," Lindsey says. "I wanted to learn all the scientific names. I wanted to be able to identify them all. I did not become a paleontologist, but what it did for me was put me on the pathway of science and engineering, and those things served me well for the rest of my life."

While A T. rex Named Sue came to the Mobius as a last-minute opportunity — "Essentially, they reached out to us and said, 'We got A T. rex. You want it?'" — Lindsey hopes the natural draw of a dinosaur introduces a new audience to the fledgling science museum, still trying to gain its footing two years after opening.

"Sue is going to be great for us," Lindsey says. "We're very confident that we're going to see a bump in attendance, and that's great. But it's not an ongoing, long-term solution [to attracting the public]. We have to create that longer-term engagement, and that just frankly takes time, that takes decades. What we'll get better at over the next few years is interpreting what exactly will resonate with our constituency.

"No one starts out as a beloved cultural institution. It takes a while to get there." ♦