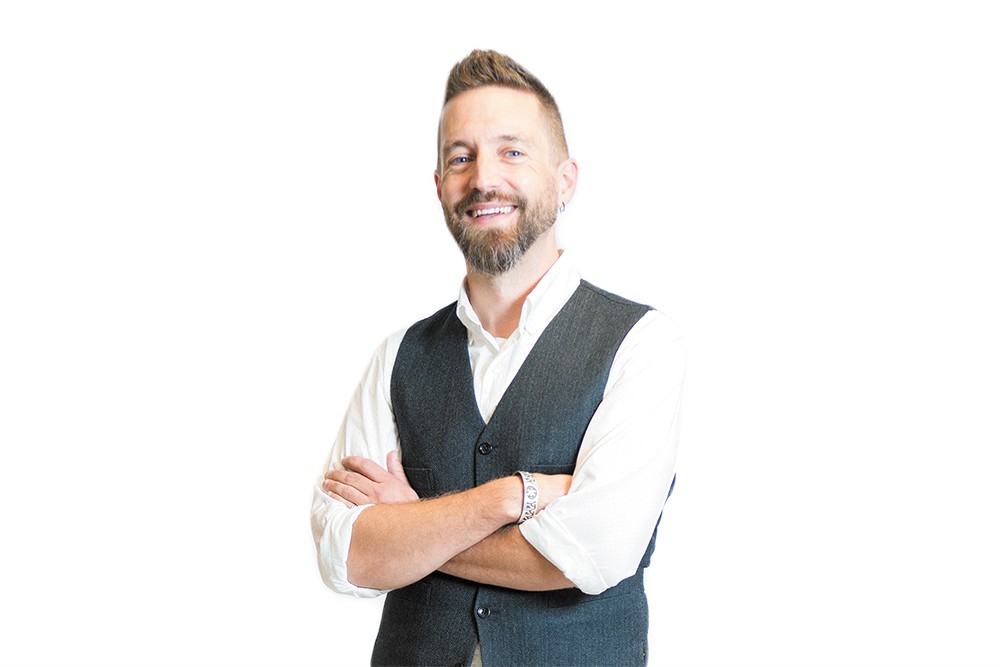 While Charles Pepiton has been teaching theater at Gonzaga for five years, his life around stages stretches beyond the classroom. In 2007, he and some like-minded friends started Square Top Theatre in the small Colorado town of Pagosa Springs. Originally a traditional repertory company, Square Top has evolved into an international artist collective that tackles everything from live theater, to film, to visual arts.

The group's latest work is a theatrical production of The Scent of a Thousand Rains, directed by Pepiton and penned by Square Top's Damon Falke. It's the final piece of a series the duo has dubbed "The Memory Cycle" (the first two were produced in New York and New Mexico), and will appear at the Vista House at Mt. Spokane this weekend and at the downtown Spokane Public Library in early October, a show that will be broadcast live on Spokane Public Radio. We talked to Pepiton about the unusual location, the play and more.

This interview has been edited for length and clarity.

INLANDER: The Scent of a Thousand Rains is "a new play, in verse." What does that mean?

PEPITON: It started as a 35-page poem written in verse in a really classical sense. Damon Falke is a rigorous poet with a classical sensibility. One day he and I were talking about Homer, and about the way that The Odyssey used to be delivered on the mountaintop, or in a place of significance outside of the city, with musical accompaniment. I said, "We gotta get back to that." And he goes, "I've got something that you might want to read."

It's this beautiful monologue that jumps location, so it's a single actor talking, and he's talking to this woman that he loves ... It's all about this man who's dealing with his transience. He's moved from place to place to place, from New Zealand to Nepal to Hungary to Utah, and he's trying to come to terms with permanence and impermanence.

How did it come together?

I contacted Tana Bachman-Bland, a violinist in town, and the length of her talent is amazing. And I got Ryan Childers, an actor in town, and Tana in a room [last] September and we just started reading this poem. And Tana was reacting to the text as the woman he's speaking to, but instead of speaking language, she's speaking music ... So sometimes she "speaks" with him, sometimes she plays to him, instead of speaking. And she's got everything from the "Goldberg Variations" from Bach that she's playing on violin to Federico Mompou, a jazz pianist she's adapted for violin, heartbreakingly beautiful Hungarian folk hymns, Mormon hymns, all sorts of music she weaves together to chart this character's journey.

Was the Vista House always the place you wanted to stage the play?

It was the first and only choice. Whenever I see a space like that, my mind always thinks, "What can I make?" It's just got this amazing sense of history. It was designed in the '30s, from a school of architecture that the design itself is supposed to emerge naturally from the location. I love the idea of taking a group of people out of the city to a mountaintop, to hear stories in this really old way.

You won a Spokane Arts grant for this show. What will that mean for the production?

It helps us remove barriers to art access, which is something we're really concerned with. You make these pieces over this long period of time, and what we want is an audience. Often what happens is people can't afford $50 a ticket, or $25 per ticket for an evening's performance. I don't want to perform just to that set of the community. So directly, they're underwriting all our ticket sales for the premiere performances on Mt. Spokane, and also for the Lens (in the downtown library), and an additional one we're still scheduling.

How many people can go to these Mt. Spokane shows?

Vista House can hold 50 people, so we're "selling" 45 because the 50 also accounts for actors. And we have a bus that can hold 46. I hope people have a good sense of humor about that. We're going to be leaving from the Grocery Outlet and driving up to the mountain together. I'm encouraging people to bring a picnic. We'll get there right at sunset, take in the sunset from the house and then we'll go in and see a show. ♦