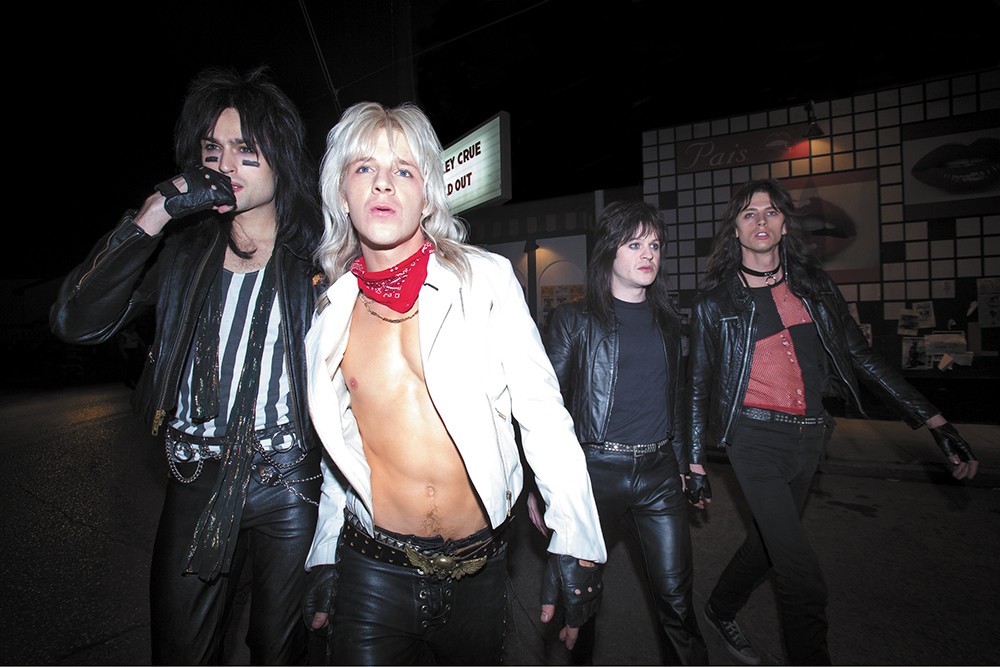 The Dirt is a grimy sex-and-drugs-fuelled look at one of the '80s most popular bands.

The genius of Mötley Crüe isn't that the L.A.-based quartet created some amazing new hard-rock sound. No, the genius of Mötley Crüe (and I'm using the phrase "genius" extremely loosely) is that the group of Vince Neil, Nikki Sixx, Mick Mars and Tommy Lee knew how to brand themselves as everything many American teen boys of the '80s wanted in a rock band.

That brand? Sex, drugs and rock 'n' roll — in that order. The Crüe's music was loud and basic, their tour stories were exceedingly crude, and their off-stage lives were so full of the kind of shenanigans — sex tapes, lethal car accidents, near-lethal overdoses, marriages to Hollywood actresses and Playboy playmates — that a feature film depicting the band's golden years seemed like a natural.

That film arrived on Netflix over the weekend, packed with Crüe songs, terrible acting, shocking antics straight out of the band's VH1 Behind the Music episode and incredibly antiquated attitudes toward women — here presented mostly as naked, nameless playthings for the four lead characters when they're not being mean moms or cheating girlfriends. Ugh.

The Dirt is based on the Crüe's best-selling (and admittedly entertaining) four-headed 2001 autobiography, and the movie was years in the making before finally landing with an obnoxious, slimy thud on the streaming service. The Dirt was, fittingly, directed by Jackass veteran Jeff Tremaine, and its 108 minutes are packed with as many of the shocking scenes and as much of the band's interpersonal drama as he could fit.

Is The Dirt a good movie? Well, no, not really, but it's never boring. I came away from watching with the same feeling I have about the band as a whole: pretty terrible, but captivating nonetheless. I grew up at the perfect time and place to be a Mötley Crüe fan, the Midwest in the '80s. And even though my tastes at the time leaned more toward the funky pop of Prince or college-rock cool of R.E.M., I still found myself watching Crüe videos on MTV, reading about them in metal magazines like Circus, eventually even going to see them in concert on their triumphant Dr. Feelgood tour.

That tour was basically the end of the glory days for Mötley Crüe, and The Dirt movie ends shortly after showing that even though the four band members were (mostly) sober for Dr. Feelgood's recording and tour, interpersonal turmoil soon split the band via lead singer Neil's firing/quitting (that point was left unclear in the movie, and the book, and in every interview with every band member I've ever heard). The Dirt spends a couple minutes on the Crüe's failed attempt to continue with a different singer, then has a quick scene of band reconciliation and ends with the original foursome taking the stage together again, accompanied by the message "Mötley Crüe played together for another 20 years."

That's not exactly true. After the initial reunion, Tommy Lee quit for a while, replaced by two different drummers. And there are definitely liberties taken throughout The Dirt for the sake of speeding the narrative along; one of the best bits is when Mick Mars (played by Iwan Rheon) breaks the fourth wall to tell the viewer that the movie version of how the band met powerful manager Doc McGhee (David Constabile) is total bullshit, as McGhee would never have visited the dumpy Sunset Strip apartment where the band lived pre-fame.

That choice to have the band members speak directly to the viewers works well at first, and repeats how the book version of The Dirt is structured, with each taking turns telling their perspectives on band history. The problem is when those scenes are done in just voiceover — it's impossible to tell which guy is talking (although we can assume it's always Tommy Lee when the line readings start with "Dude!" or "Bro!"). Each one of the Crüe dude-bros are presented as an utterly cartoonish version of the real thing. Neil (Daniel Webber) is a cocaine-loving dim bulb rarely seen without a naked actress nearby. Sixx (Douglas Booth) is the tortured artist with a heroin problem. Lee (Machine Gun Kelly) is a party hound who falls in love too easily, and Mars is the band's elder statesman and resident weirdo; having Mars dropping deadpan jokes at every turn is one of The Dirt's best decisions.

In fact, much of the movie is delivered as comedy, which certainly helps it move along. Between the goofball style and debauchery, it's more fun than it has any right to be. The big problem is when it tries to deliver drama. Whether it's Lee's frustration with a smacked-out Sixx ruining his wedding to Heather Locklear, or Neil dealing with the death of his 4-year-old daughter from cancer, none of the actors have the chops to make the serious scenes work nearly as well as those played for laughs. The drama comes off very TV-movie quality. And while the performance clips are pretty strong, the (band-produced) movie's attitude that Mötley Crüe was, as Sixx says at one point, "showing the kids something they've never seen before" is just laughable.

Like their music, The Dirt is best viewed through the lens of the band's decades-long effort at branding themselves into being legends. It's not a good movie, but it continues building their self-constructed mythology years after the band's last gig. Unlike the sanitized version of Queen captured in Bohemian Rhapsody, The Dirt is a grimy, misogynistic, sex-and-drugs-fuelled warts-and-all look at one of the '80s most popular bands. For good or ill. ♦

The Dirt is now streaming on Netflix.