Lend Me a Tenor's life lesson: Every time a door slams shut, another one opens 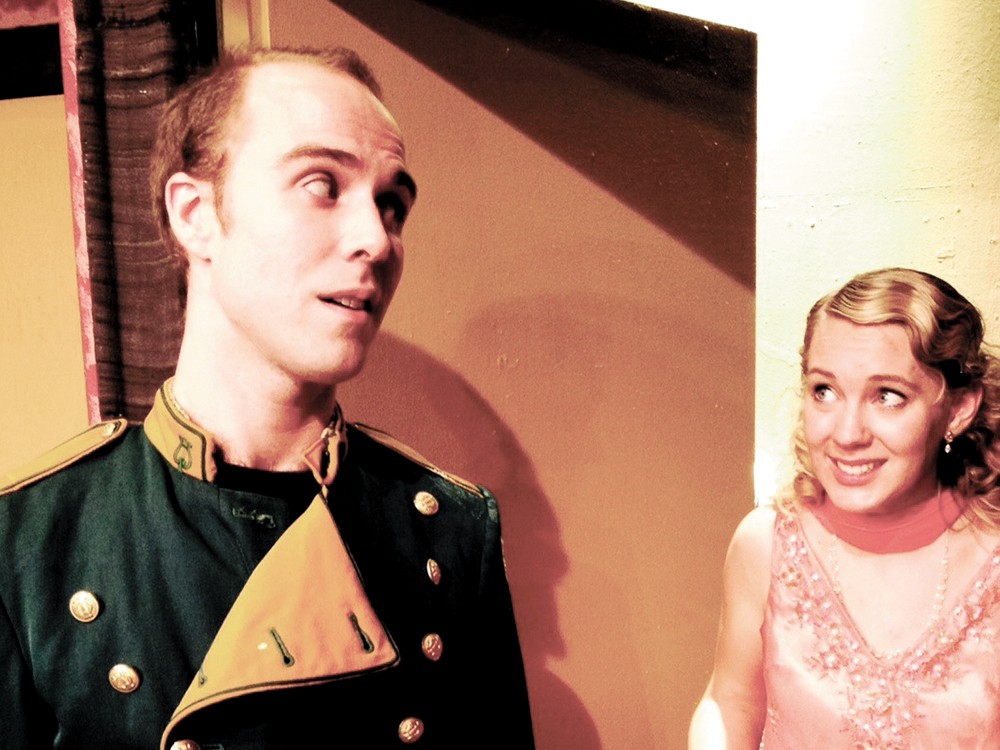 Lake City Playhouse's Lend Me a Tenor holds out the promise of action before anyone steps onstage. Although the set itself — a two-room hotel suite in Cleveland, Ohio — is static, along the back wall stands a row of five doors, not counting a sixth that's situated perpendicularly to the audience on a partial wall dividing the bedroom from the lounge. That array of a half-dozen doors clearly wouldn't be there without good reason, and for audiences unfamiliar with this hyperactive farce, part of its fun lies in seeing who among the eight-person cast will use which door for what purpose over the course of its one dramatic evening.

Fittingly, everything is set in motion by the opening of a door. Maggie Saunders (Alyssa Herzinger) is swooning over a radio broadcast of famed opera tenor Tito Merelli (Ricardo Rivera) as her high-strung, would-be fiancé Max (Steven M. Anderson) enters the suite, explaining that Merelli, due to arrive for a performance later that evening, wasn't where he was expected to be. Much agitation and hand-wringing, made all the more acute by Maggie's irascible father Henry (Dave Rideout), who's gone to great lengths to arrange Merelli's performance this evening as the lead in Otello.

"Il Stupendo" finally arrives in the company of his wife Maria (Trigger Weddle). He's not feeling well due to overeating, and she's still stewing over his flirtations with a waitress — not his first, we're told. A few spats and misunderstandings later, people have already begun hiding in bathrooms and closets, and Maria has slammed the door on her way out, leaving an irate Dear John letter for Tito. That letter will propel him into fits of remorse and self-pity, and also be misinterpreted by his minders, who mistake him for dead after he passes out from too much wine and pills.

This leaves Max and Henry in a bind. They've got to ensure that Tito's comatose body remains undiscovered by autograph hunters like the camp bellhop (Brandon Montag), arts patron Julia (Monica Thomas), and even Tito's seductive operatic co-star, Diana (Hannah Paton) while passing off Max, now dressed in a wig and blackface, as a suitable proxy for the international star. To help them pull this off, those six doors will offer some means to escape, stall or hide. Every one of them will be put to good use, over and over.

Most of these actors aren't regulars on the Lake City Playhouse stage, which might make their reliability harder to predict beforehand, but the casting is definitely sound. Rivera is fantastic as Tito, capturing all the spontaneous passion, bewilderment and histrionic woe that the role calls for; his impeccable accent never falters. Weddle, despite the overall brevity of her stage time, is fiery Maria through and through. Montag's exuberant bellhop is the screwball in an already screwball company, reminiscent of Stephen Stucker as Johnny in Airplane! Both Rideout and Herzinger are adequate in what are relatively straight-faced roles by comparison. As Max, however, Anderson comes across as a bit too whiny and ineffectual. There's no doubt that his newfound confidence as "Tito" has to contrast with his earlier behavior, but neither should the transformation be quite so night-and-day.

Costumes deserve as much attention for being inconspicuous as when they stand out. Here, Jamie Russell's very contemporary (c. 1930s) choices are a seamless part of a production in which so many of them end up on the floor. But perhaps the highest credit should go Lake City's team of technicians and designers for building a set that can withstand so much routine and necessary abuse. ♦