Heads up, Homer and Virgil - Bethesda is the new epic bard in town. 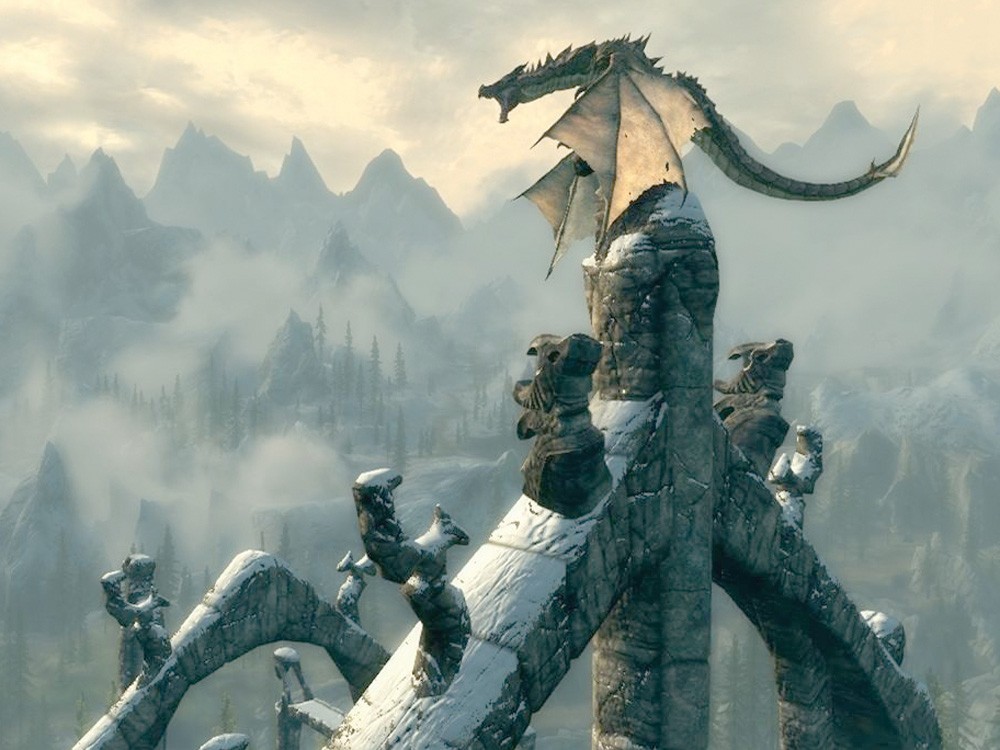 Look out, Homer and Virgil — Bethesda is the new epic bard in town.

I emerged from one of the caverns that twist up through the Pale Mountains — a cavern that had long ago been transformed into a tomb for some forgotten lord and his treasures. Stepping out from the tight rock tunnels into the bright, snowy surfaces of the upper peaks, I gazed for a few minutes at the sweep of the clouds and the slabs of the mountain before I noticed the dragon.

The curl of his neck was the only thing that gave him away in that spiked and plated landscape. He was perched atop a cliff in the distance, as still as an enormous gargoyle carved by some deity. Catching my breath, I turned and began a rapid descent down the mountain’s steep slopes, sliding part of the way and running the rest. Even though I had already battled dragons — and even though the greybeards of Skyrim were calling me “dragonborn” — I knew I could not fight the coiled black beast that sat on the mountain above me. Not yet.

And so I ran. As I descended, I found a pack of wolves stalking one of the snowy passes that cut through the mountains. I swung my hammer and cracked their backs. I ran south along the banks of the Darkwater River. At one point, an assassin charged out at me from the trees, declaring her intention to kill me. I pulled back my hammer and drove it down through her head. And still I ran on, improving my combat skills hammer blow by hammer blow, until I reached the chilly fog of the town of Riften.

In that ramshackle collection of houses and shops that sit like ships on the waters of Lake Honrich, I climbed down to the wooden walkways and passed through a door into the sewers of the Ratway. There, in the dripping, dark air, giant rodent-like skeevers met the head of my hammer. I left a bandit’s body sprawling in the middle of the dirty floor. And as I passed through a door into a large, tank-like cistern, a group of black-clad, hooded men turned to greet me, their eyes gleaming with malice. In Skyrim, I’ve found, dragons await in forms both high and low.

THE GOOD: The word “epic” is frequently attached to videogames — usually long, pretentious games with big, showy environments. But Bethesda Game Studio’s Skyrim truly deserves to be called epic. From icy pure mountaintops to foul cellars, from ancient magical weapons to forgotten farm equipment, from gods to prisoners, Skyrim links the grand to the groveling. Heads up, Homer and Virgil — Bethesda is the new epic bard in town.

THE BAD: Skyrim relies on details to create its epic, interactive world. And when those details are flawed, the world fails. Large swaths of grass resemble repeated tiles. Mountains occasionally open up like tents, allowing me to peer beneath them. Characters look at me whenever I’m standing nearby, even when talking to one another. Corpses hover for all eternity in mid-air. In a world this big, the little things all count.