A city watchdog almost never bites; now it's facing an unprecedented number of complaints against the city's top elected official 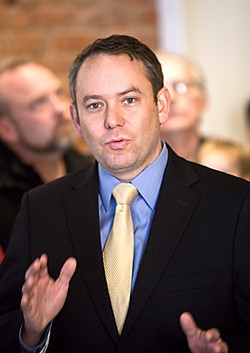 Six complaints have been lodged against Spokane Mayor David Condon.

What could be a pivotal moment for Spokane Mayor David Condon began with a lawyerly splitting of hairs.

The city of Spokane Ethics Commission — a citizen panel broadly charged with holding city officials and employees accountable — held its initial hearing last week on a salvo of complaints filed against Condon. The complaints allege that the mayor committed acts of "dishonesty" and "moral turpitude" by denying that he was aware of sexual harassment allegations made against former police Chief Frank Straub, when documents released after his re-election show that he did know.

Shortly after the hearing began, Dennis Cronin, a local attorney on the commission, pointed out that the city's code of ethics lacked definitions of the violations brought against the mayor.

"I don't know how we can determine these questions if we don't have definitions of what 'dishonesty' is, or what 'moral turpitude' is," said Cronin, his voice barely audible, as he continued his legal parsing.

Troy Bruner, the commission's chair, responded that the code sometimes lacks definitions and most complaints are filed by citizens not well versed in the law. At this point, Jamie Pendleton, a businessman facing fraud charges of his own who filed one of the complaints, interrupted to read the commission's mission statement, pointing out that it demands "the highest standards of ethics" from all city employees and officials.

"It's the ethics committee's job to make sure that all politicians elected by Spokane citizens are honest," not to define dishonesty, Pendleton said.

Bruner interjected, saying he needed to give Condon's attorney, James King, a chance to respond. By the end of the two-and-a-half-hour hearing, King had successfully argued that there wasn't enough evidence in two complaints. Only one complaint alleging dishonesty against the mayor, filed by former Council President Joe Shogan, would be considered.

In the past two months, a total of six complaints have been filed against the mayor, thrusting the commission and its expansive but rarely used powers into the public spotlight. Local leaders now say they're bewildered and frustrated by the commission's past decisions, and others suggest it's time for a complete overhaul.

"They are not going to fine [Condon] enough where it will make any difference," says Shogan, adding, "I guess it matters to me and some people out there whether he lied or not."

The Spokane Ethics Committee was established in 2006. Last year, the city council made it a commission with broader powers. Spokane County Commissioner Al French, a former city councilman, says that after Mayor Jim West was recalled in the wake of an Internet sex scandal, there was a move at City Hall to create a forum to air accusations against city officials.

"There was no structure in city government to hold [elected officials] or senior management accountable to a set of standards consistent with community values," French says.

The seven-member citizen panel, nominated by the mayor and approved by the city council, fields complaints alleging violations of the city's ethics code, which governs what kind of gifts city employees and officials can receive, as well as disclosure of confidential information, conflicts of interest and acts of "moral turpitude" and dishonesty.

It's currently comprised of two lawyers, two business ethics teachers, the administrator of a substance abuse treatment clinic and a psychologist (one position is vacant). The commission can impose financial penalties up to $5,000, cease-and-desist orders, initiate recall elections or refer matters for prosecution. The commission can also subpoena witnesses and place them under oath, which it's never done. Over a decade of existence, the commission has issued only two financial penalties. They've both raised eyebrows.

Last year, City Administrator Theresa Sanders was fined $75 for lying about why former police spokeswoman Monique Cotton was transferred to the parks department. She was also given a cease-and-desist order to not speak publicly about the matter.

"The issue with Theresa Sanders is there has been a lot of ridicule of the findings," says Rick Eichstaedt, executive director of the Center for Justice, who calls the cease-and-desist order a "get out of jail card" for answering tough questions. Shar Lichty, who ran against Condon last November and filed the complaint, says the fine means little for a highly compensated city official. "Her boots cost more than that," says Lichty.

Bruner, the commission chair, says the fine was an "arbitrary" amount agreed upon because Sanders was remorseful and the city hadn't suffered any harm. He also says the commission wanted to send a warning to city employees and officials that it's willing to impose larger financial penalties for dishonesty.

Mike Piccolo, a city attorney who works with the commission, says most complaints are dismissed because they fall outside the city's code of ethics. French says the fact that penalties are rare is evidence the commission is deterring bad behavior.

In 2013, Council President Ben Stuckart paid $250, the largest fine to date, for leaking a confidential email to the president of the local fire union. Stuckart says he admitted to the violation and suggested his own fine.

"I think that's insane that the one found guilty suggested his own punishment," says former City Councilwoman Nancy McLaughlin. In 2012, McLaughlin, then running for the legislature, was the subject of an ethics complaint for using a photo of herself posted on the city's website in her campaign materials. The complaint was dismissed because the photo is in the public domain, and McLaughlin says it's an example of the commission being used by politicians to tarnish their opponents.

Elected officials say it's not financial penalties but the "black mark" on their records from an ethics violation that's a deterrent. Stuckart says people frequently bring up his violation. But it was never a significant issue in his re-election campaign, which he won with nearly 63 percent of the vote.

Jon Snyder, who resigned recently from the city council to take a job with the governor, says he doesn't understand why Sanders and Stuckart were fined different amounts. Last year, he filed a complaint against Councilman Mike Fagan for leaking confidential information concerning a highly political initiative petition. The complaint was dismissed, and Snyder says Fagan put the city at greater legal risk than Stuckart did.

"[The commission is] supposed to rule purely on our ethics code," he says. "And it may be up to the city council to revisit it."

Statewide, the Washington State Executive Ethics Board issued $145,900 in penalties in 2014. The Center for Public Integrity, an investigative journalism nonprofit, sharply criticized Idaho in a report last year for having no state ethics commission. Boise is the only city in Idaho with an ethics commission, and its chair, Jodi Nafzger, says it primarily has an advisory role.

Meanwhile, the Seattle Ethics and Elections Commission, which oversees 10,000 employees compared to 2,000 in Spokane, has a larger paid staff, can initiate its own investigations and has issued nearly 60 financial penalties since 1999.

Stuckart says he has his own frustrations with the ethics code, and that at some point he plans to introduce legislation that will create an inspector general — a position that New Orleans and Rochester, New York, have in place — that investigates fraud and malfeasance in city government.

"[The commission] is a volunteer board," he says. ♦

Speaking of Scandal At City Hall