The "final chapter" in a dying franchise that just won't die 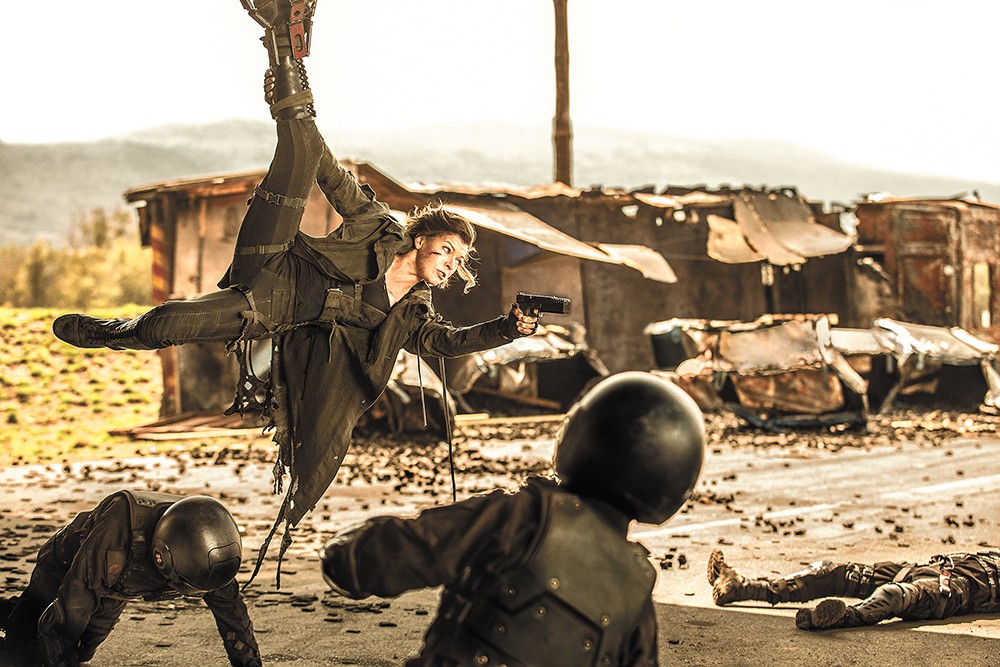 Alas, there is not much I can tell you about this ultimate entry

in the video-game movie franchise Resident Evil. I apologize. It is rare that a film has flummoxed me so.

Being familiar with the movies, and having played a handful of the video games, I thought I'd be prepared to walk into this film with at least a modicum of understanding of the world, the motives of its characters, and, of course, those zombie Dobermans. I guess I shouldn't be surprised that the film is an incoherent mess; I had naively assumed that a film declaring itself as "The Final Chapter" would have the courtesy to wrap up the narrative nice and tight. But that doesn't seem to be director Paul W.S. Anderson's intent, as is his way.

The writer on all six of the films, and the director of four, Anderson, along with partner and star Milla Jovovich, have given the dwindling fans of the series a limp and lifeless simulacrum of what a Resident Evil movie looks like.

And this is what it looks like: Alice (Jovovich) in a postapocalyptic wasteland, hooking up with a ragtag group of survivors whose names you may recall because you played the games. If the terms "t-Virus" and "Raccoon City" ring a bell, well, you're halfway there, as Alice must travel to the latter to find the last known antidote of the former to stop the extinction of the human race.

Attempting to thwart her efforts is Dr. Isaacs (Iain Glen), who happens to have a clone roaming around the wasteland gathering an army, but these things happen sometimes. There's also an AI, known as the Red Queen (Ever Anderson), who was once evil, but decides to help Alice in her quest, because it probably seemed like a good reversal at the time. With 48 hours to find the cure, the film is given an annoying deadline that, in a bold movie, actually ratchets down the tension. Which is a shame, because Jovovich is a badass action hero.

But here, she (and the film) are at the mercy of editor Doobie White, whose work in assembling a cohesive film by stitching together a succession of shots, each no longer than seven seconds, does the movie no favors (the predominant color palette of air-vent silver doesn't help, either). The film is drab and epileptic.

Resident Evil: The Final Chapter purports to be the last in this dying franchise, but when the bad guy has a line at the end about his work "not being over yet," I can't help but be fearful about what the future may hold. ♦

Resident Evil: The Final Chapter is not showing in any theaters in the area.