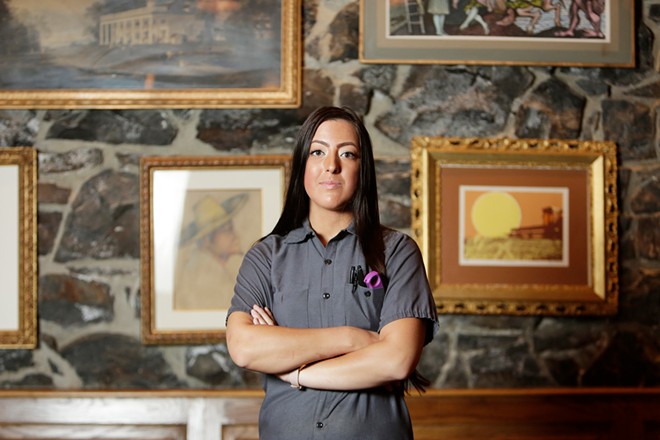 Mary Weaver has taken on just about every role in the restaurant industry, having grown up in a family that formerly owned an eatery of their own. The 27-year-old rising talent is now executive chef of the modern comfort food-inspired Gilded Unicorn in downtown Spokane, rising to the position after working there as sous chef for two and a half years.

While Gilded Unicorn, part of chef and restaurateur Adam Hegsted's Eat Good Group, was temporarily closed for a kitchen remodel in spring, Weaver and her team have since been back in the kitchen crafting creative, Northwest-inspired dishes like salmon poke nachos. The restaurant's fall menu is set to debut later this month, and it remains open for limited dine-in seating, as well as takeout or delivery orders.

INLANDER: How did you get to your current role?

WEAVER: I started in the industry really young because my parents owned a restaurant in Post Falls called Steve's Sports Dugout. I started out there serving and busing and doing dishes. When I was young, we sold the business and I really missed it, so I continued to pursue the culinary arts and in the past worked at the Falls Club, Coeur d'Alene Beachhouse and Sweetwater Bakery. When I was 17, I worked at the Coeur d'Alene Casino under Adam [Hegsted] as executive chef, and there I went from pre [cook], line [cook] to lead cook. Then he contacted me a few years later and had a new project and needed a sous chef, and that is how I ended up out here.

When did you know you wanted to become a chef?

I don't know the specific time, but from growing up in the industry I've always really enjoyed cooking, and a little after my parents' restaurant closed I just super missed it and the family atmosphere and bonding you have with your staff. I think that is why after it closed, I got right back into it. I love to just do weird stuff with food and see what I can make.

What's a dish or ingredient you hated as a kid but love now?

Weirdly enough, cheese. When I was a kid, I only liked the gross Kraft singles and I thought everything else was repulsive. Now I literally buy the five-pound block of extra sharp Tillamook cheese and eat it by the slice. It's a very bizarre turnaround.

Name one restaurant in the Inland Northwest you return to over and over again, and why.

I really enjoy Belle's Brunch House in Hayden. I'm a sucker for all things brunch, especially anything with hollandaise sauce. I could eat it forever and ever and not get tired of it.

I'd say probably the Robot-Coupe [food processor]. It has a variety of attachments that make it extremely versatile. We use it at Gilded Unicorn to make lots of things. It has all types of attachments to shred cheese, chop veggies, meat and all kinds of stuff. I have one for my house, too. I highly recommend it.

Name one "celebrity" chef you look up to, and why.

Grant Achatz of Alinea and the Aviary [in Chicago]. The reason I enjoy him is because of his work with progressive-style cuisine, especially pushing the boundaries of molecular gastronomy. I would love to visit one of his restaurants one day.

The most challenging aspect of my job is pushing myself to learn new techniques and cooking styles so that I can continue to improve the creativity and the quality of the menu at Gilded. It's a challenge that I really enjoy because at the end of the day it's driving me to be a better and more well-rounded chef.

We completely renovated the back kitchen and got brand new equipment and floors. Right now we're still a play on modern comfort food, but we're taking it a step above that. Some of the new dishes on our menu that play to that idea are the salmon poke nachos: marinated sockeye salmon with a roasted pineapple cheese, avocado and chili garlic vinaigrette. It's a fun take on nachos that's a little outside the box.

That is just what we like to do, and one of the menu staples is a tater tot casserole, but the way we make it — the wild mushroom gravy and everything about it — is much more elevated than what you'd get at your mom's. As a whole, we're continuing to move forward with modern comfort food with our own spin, keeping it fun with a whimsical spin on it.

Presently it's probably the Northwest salmon dish. I've been a little obsessed since putting it on the summer menu. It has chicken fried oyster mushrooms combined with acidity of an apple relish and blackberry mustard, and the flakiness of sockeye salmon is a match made in heaven. It's a really nicely balanced and beautiful plate, and out of my last menu it's the thing I'm far most proud of.

Finish this sentence: "You can never have too much..."

Garlic. I probably put garlic in 90 percent of the dishes I make, no shame about it.

What's next for you, five or 10 years in the future?

Honestly, my biggest goal is to travel and gain a deeper knowledge of different styles of cuisine and unfamiliar ingredients. I would really like to learn about techniques that vary from the norm we're used to seeing here in North America.

What's one of the biggest myths about chefs that you can dispel?

I think the biggest myth is that we eat amazing food at home for every meal. Don't get me wrong, I cook a lot at home; it's how I like to experiment and express different styles that I don't make at Gilded. But sometimes when I get off a crazy 15-, 16-hour shift at 2 am I am totally content eating a package of chicken Top Ramen and calling it a night.

Describe the Inland Northwest's culinary scene in one word.

Dynamic. It's just changed so much in the last 10 years, I can't even imagine what it'll be like in the next 10 years.♦

The original print version of this article was headlined "Chef Chats: Mary Weaver"