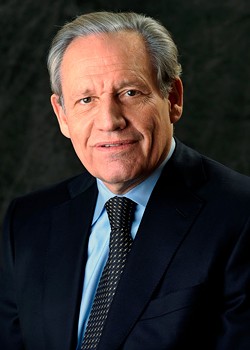 Bob Woodward
Commonly held facts and transparency are vital to a healthy functioning democracy, Bob Woodward, renowned pulitzer prize-winning journalist and associate editor at the Washington Post, argued during a speech at the Spokane Convention Center on Friday.

The truth was crucial in exposing the Watergate scandal — Woodward originally became famous for his reporting on the issue, which has been memorialized in the film All the President's Men — and bringing down President Richard Nixon, who was facing impeachment by Congress and ultimately resigned.

"The central lesson of Watergate is the importance of truth in our national dialogue," Woodward told the crowd assembled for Whitworth University's President's Leadership Forum. "And if we can’t agree on what the facts are, how can we have a useful political dialogue? How can we have citizen understanding? How can we even have journalism when you have, essentially, a common disagreement about what are the facts?" Woodward said.

Hanging over the conversation was an impeachment inquiry of President Donald Trump for pressuring Ukraine to investigate former Vice President Joe Biden, a potential adversary for Trump in the 2020 presidential election. (Yesterday, Trump publicly called on China to investigate the Bidens.) While Woodward refrained from drawing exact parallels with the two cases, he highlighted Trump's recent alarming behavior following the announcement of the impeachment inquiry, as well as how Nixon abused his office for personal gain.

"Watergate really was an effort to destroy the process of nominating and electing a president in our country," he said. "What the evidence showed was that Nixon used that presidency as an instrument to maintain and expand political power."

"The question is where are we now and how do we as a country assess the Trump presidency," he added later. "Trump is teetering on the verge of doing things that shock not just Democrats but Republicans: Proposing to arrest the chairman of the House Intelligence Committee who is leading the impeachment investigation or President Trump urging Ukraine and yesterday urging China to investigate the Bidens."

While Woodward said the Nixon presidency was driven by "hate and settling scores," he declined to offer up any two words to describe Trump's tenure when asked by Whitworth University President Beck Taylor during a Q&A session.

"Somebody called me the ultra-centrist and I really am. I want to listen, you can be so wrong when you’re so sure," Woodward said. "I want to make sure that there is the full story of what Trump did."

When Taylor noted the title of Woodward's latest book on the Trump presidency, Fear: Trump in the White House, Woodward said that Trump told him during an interview that "real power is fear."


"He scares the daylights out of people in lots of ways and it’s something you can do in the New York real estate world," Woodward said. "Having that as the guiding light for a president, we’re seeing the result of this. We have a governing crisis."

The legendary journalist also urged the media to remove emotion or hints bias from news coverage and focus on aggressive watchdog reporting on an administration that bucks accountability, especially given Trump's efforts to discredit the media: "We’re being tested," he said. "It requires a really large effort and I hope we’re up to it."