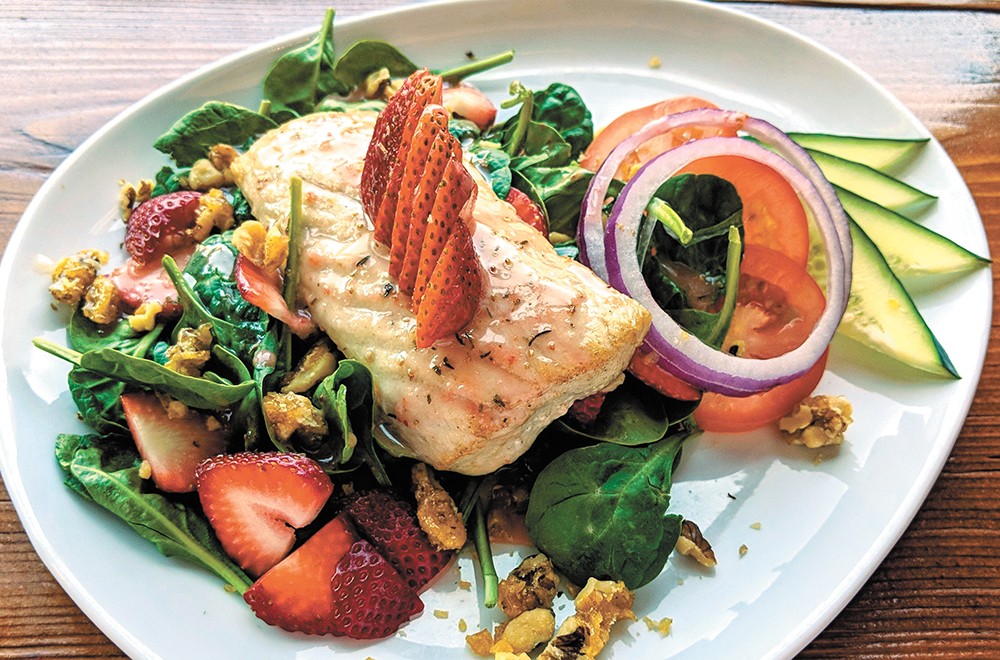 Nestled in the crook of a mountain near the Montana border, Wallace, Idaho, is home to less than 800 people year-round. The mining industry that once drew thousands to the area has experienced dramatic and steady decline over the last century. Once-bustling city streets have since turned quiet, making it tough for some businesses to succeed.

The Fainting Goat, a casual fine dining establishment in the heart of Wallace, is one of these local businesses that's seen its share of ups and downs. Offering an upscale menu that breaks away from the small town's burger-and-fries feel, diners from all over the U.S. have hopped off Interstate 90 since 2013 to try its unexpected menu and to relish the charming, welcoming atmosphere of the tiny community.

Still, the restaurant's original owners struggled to keep it afloat. Despite stellar reviews, complications led to the business closing its doors just two years later, in 2015. The building stood empty until Randall Julin, from Spokane, bought it in June of 2016.

"Really, I've got no business being in [the restaurant industry]," Julin chuckles. "I was an aerospace engineer, I lost my way and became a restaurateur. I'm supposed to be retired."

The 67-year-old and his wife, Cheri, fell in love with Wallace years before, as many do. Even for first-time visitors, it's hard not to feel at home while strolling through the town's pleasant neighborhoods, lined with elegant old homes fronted by immaculate gardens and adorned with American flags. The entire heart of the historic mining town is listed on the National Register of Historic Places.

Despite a long career in the aerospace industry, Julin wasn't quite ready to give up the working life. The Fainting Goat presented an opportunity for something new.

"My wife of 45 years, who's put up with all my idiosyncrasies for all that time, she fell into retirement almost immediately, and was very happy, so she's kinda kicking my butt every day for doing this," Julin says. "She went along with me and she does the accounting."

The couple kept parts of the original restaurant's vision, with decor that dances the line between modern and old-school, playing with charming rustic details while keeping the space current and stylish. Nods to Wallace's history can be found throughout the restaurant, including a rustic hotel sign used as a prop for Dante's Peak, the doomsday film about a giant volcano filmed in Wallace back in 1997. Julin added his own twists along the way, including a taproom with reclaimed wood furniture and an outdoor patio.

The Fainting Goat's menu also retained its former upscale, fine-dining features. The dinner menu, offering appetizers, salads and six entrees, was created by chef Sam Puckett, who traveled from Arizona to work as head chef at the restaurant. Entrees include a bacon-wrapped quail marsala ($29), while an appetizer highlight is a stacked caprese of juicy Roma tomatoes topped with fresh mozzarella and basil, drizzled in a balsamic reduction ($13).

The restaurant's culinary team tries to source fresh, local, organic products whenever possible, including seasonal vegetables. Yet the true star of the show at the Fainting Goat is its collection of beer and wine.

A large wine dispenser imported from Italy is prominently visible to patrons entering the restaurant. The cylindrical contraption holds 16 bottles of red wine; a small nozzle protrudes near the top of each, allowing diners a choose-your-own-adventure-style wine tasting. A similar dispenser holds chilled wines as well. The wine list features many regional choices, from a sweet grenache from Walla Walla to a dark syrah from Colter's Creek in Idaho, and many more.

For wine tasting, diners are given a credit card-like slip to insert into the dispenser which allows them to then choose a wine and pour size ($1-$15.50 each), ranging from a 2-ounce tasting, half or full glass. The Fainting Goat offers more than 30 wines, as well as nearly 40 craft beers ranging from local breweries to domestic favorites, as well as several imported beers.

Even with its creative menu and decor, pulling in new customers to a small town can be tough. One of the first steps Julin took to draw diners to the Fainting Goat was putting up a billboard along the freeway to catch the eyes of locals and out-of-towners alike.

"A lot of people don't know what Wallace is all about. If they're from Seattle, Missoula, Boston, Chicago — wherever it might be — that was one of the challenges, just getting those people off I-90," Julin says.

The billboard was a hit, and since the Fainting Goat reopened under the Julin's ownership two years ago, it's helped bring diners from all over the U.S. and the world each summer to Wallace for the first time. Julin remarks that one customer recently noted that Wallace is becoming a "foodie's destination."

He hopes the Fainting Goat has contributed to that sentiment.

Even so, and despite a steady stream of diners throughout the summer months, business becomes significantly slower during the colder parts of the year. For this reason, Julin and his wife decided to operate the Fainting Goat seasonally, and so they can enjoy retirement with their family during the off-season.

The restaurant is open from May to about mid-September. ♦