The Fight for Suffrage

How the Washington Territory granted women the right to vote, took it away, gave it back, then took it away again 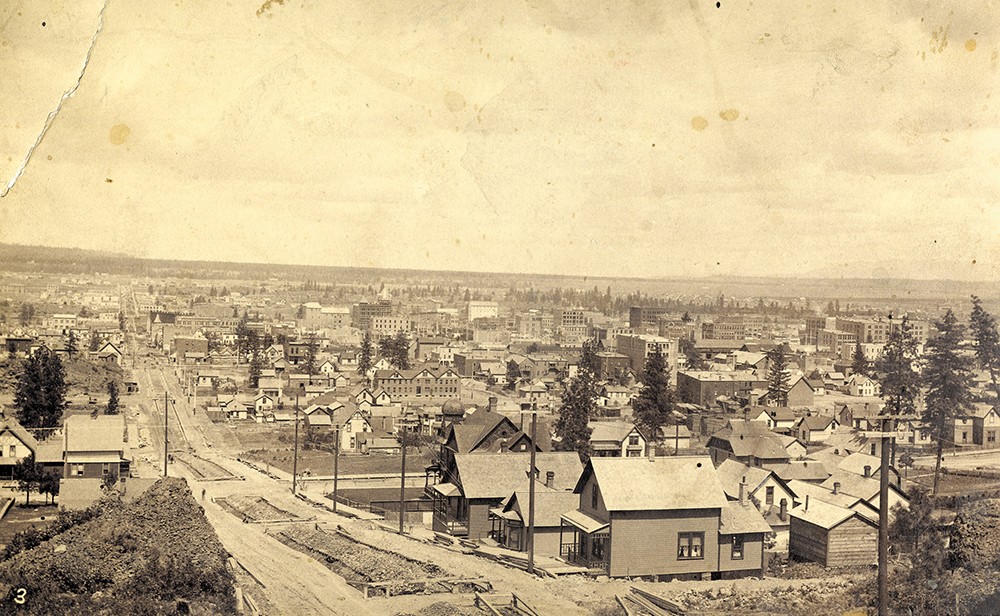 photos courtesy of the Northwest Museum of Arts & Culture
The City of Spokane Falls, circa 1890.

Although the legal landscape during pre-Washington statehood days

looked much different than the system we know today, many of the problems brought before the courts were much the same: disputes over land ownership, personal injury claims, negligence and murder.

And yes, men deciding which rights women do and don't have.

In the early 1850s, the approximately 3,965 residents in the northwestern section of the "Oregon Territory" decided they wanted a little more autonomy. In his book A Century of Judging: A Political History of the Washington Supreme Court, the late WSU political science professor Charles Sheldon wrote that residents of "Northern Oregon" were motivated by "local pride and by the not altogether erroneous belief that the territorial government in Salem was dominated by the residents south of the Columbia."

By 1853, the "Washington Territory" was born, and along with it, a Territorial Supreme Court. Originally made of up of three justices, it was later expanded to four. Back then, justices were not elected, but were instead appointed by the president. The four justices would preside over trials throughout four districts, and would assemble in Olympia once a year to hear appeals to the Supreme Court.

Recently, the Washington state courts website published all Territorial Supreme Court decisions. After a few calls to legal historians, attorneys and judges throughout the state, one story kept coming up: the battle for women's right to vote before Washington was even a state.

After many failed attempts

, the legislature finally passed a women's suffrage act in 1883, which also allowed women to serve on juries. In 1884, the Supreme Court upheld the new law when Mollie Rosencrantz of Tacoma, who was convicted of "keeping a house of ill fame," appealed her conviction because a married woman served on the grand jury that indicted her.

Justice John P. Hoyt of Olympia denied her appeal, but his ruling did not stand for long.

In 1886, an Oregon resident named Jeff Harland was convicted in Pierce County of "conducting a swindling game called 'Twenty-One' or 'Top and Bottom Dice.'" He too appealed to the Supreme Court because married women served on the jury. In 1887, the court ruled in Harland's favor. Hoyt was still a justice, but because he presided over Harland's original trial, he could not rule on the appeal.

photos courtesy of the Northwest Museum of Arts & Culture
Territorial Supreme Court Justice George Turner of Spokane pushed back against women's right to vote and serve on juries.

Justice George Turner of Spokane, who dissented in Hoyt's original decision, said the Suffrage Act was technically void because of its title, which read: "An act to amend section 3050, c. 238 of the Code of Washington Territory." According to what was at that time known as the Organic Act, an 1853 document that essentially acted as a constitution for the Washington Territory, "every law shall embrace but one object, and that shall be expressed in the title," a requirement that still exists in our state constitution.

In other words, the suffrage act was void because it did not proclaim its purpose in its title.

Turner had this to say: "In theory, legislators inform themselves carefully and laboriously of the effect of the laws upon which they vote. In practice they do not. Laws are often passed by their titles alone. They are very rarely referred to in publications, official or otherwise, prior to their passage, except by their titles. Knowing this fact and accepting it ... our constitution makers gave their mandate intending to obviate, as far as possible, the evils resulting from this lax way of doing business."

The issue came back before the territorial high court again in 1888, after the legislature again reinstated women's right to vote. That case, out of Spokane Falls, entangled women's voting rights with Prohibition.

Nevada Bloomer was denied the right to vote in a municipal election, and sued the elections officer for $5,000 in damages. In a 1989 article, current State Supreme Court Justice Charles K. Wiggins suggests that the case was manufactured by saloon owners and suppliers in order to provide the Territorial Supreme Court with yet another opportunity to snatch away women's suffrage, possibly out of fear that they were more likely than men to vote in favor of Prohibition.

Bloomer's husband owned a saloon, and John Todd, one of the election officers named as a defendant, owned a beer bottling company that supplied him. Justices Hoyt and Turner had both resigned from the bench by that time, but Turner was hired as a defense attorney in the case.

Once again, the court disenfranchised women, but this time provided a different rationale. Although Congress granted the territorial legislature authority to enfranchise its "citizens," it actually intended to include the word "male" before the word "citizen," the court reasoned. Having caught what was surely congressional oversight, the court said the legislature had no authority to grant women the right to vote.

Suffragettes in nearby territories raised funds for Bloomer to appeal her case to the United States Supreme Court, but she refused. Women would not get the right to vote in Washington state until an amendment to the state constitution overwhelmingly passed in 1910 — 27 years after Washington first took on the issue. ♦