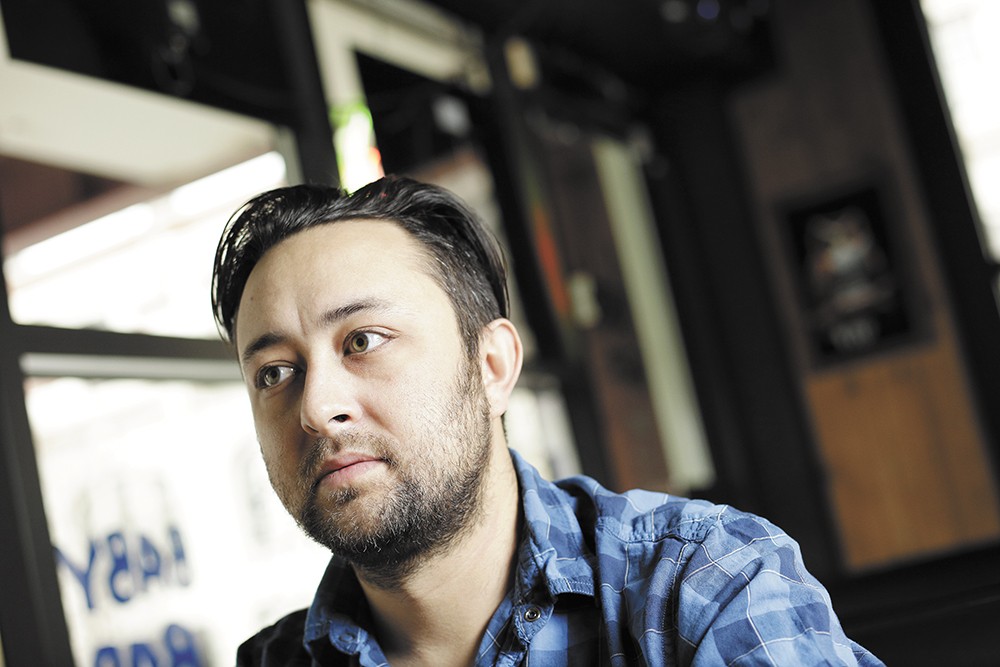 Take a look at Jason McKee's résumé, and it might be surprising

how much he's already accomplished in the film industry considering he never went to film school, and he never left Spokane.

While that list might be impressive, those roles are all feeding McKee's larger goal of writing and directing his own films. His latest, a film called Marty (or you can call it Strativarium if you want to), premieres as part of the People Are Strange showcase of short films Saturday at the Magic Lantern Theater.

"I'm self-taught in the industry with everything, and I just got into film because I was interested in it," McKee says. "I just started teaching myself everything I could to make myself a better director. I enjoy a lot of aspects [of filmmaking], but directing is definitely where my passion is. I like visual effects as a way to kind of make money. I like it. It's fun. But directing for me is really where my heart's at."

He clearly has a talent for it. McKee's first self-made film, a 12-minute black-and-white film noir called Lady Luck Case No. 37, won the "Gold SpiFFy" for Best Short Film in 2010.

"That was crazy," McKee says of winning a prize with his first effort. "The first few times I showed my stuff, I don't know if I took a breath the entire film. It's kind of crazy to see, and it's kind of a personal thing showing up there [on the screen]."

McKee's next effort, '63 Comet, similarly was recognized with a SpIFFy in 2012, and was also accepted into the Raindance Film Festival in London.

Marty is McKee's longest film yet, a 27-minute character study of a struggling, quirky man looking for art and love on the streets of Spokane, often to the dismay of his protective brother. He shot the film nearly two years ago, but working on it between other jobs meant waiting until this year's festival for its premiere.

Working on his own projects as a director has helped McKee land some bigger jobs, including a job directing an episode of Z Nation's second season.

"The thing that's gotten me noticed to direct is stuff I've done on my own, but certainly without the film community here, I have no idea what would have happened," McKee says. "Things would be a lot different.

"I know a lot of friends who moved down to L.A. to try and make it big. I kind of took the opposite approach, which is being a bigger fish in a smaller pond up here."

That film community pond in Spokane is certainly growing, though, he says. He didn't even know there was a film company in Spokane until he bumped into an old teacher who asked what he was interested in. Starting out with that company as a production assistant — "the low man on the totem pole," as McKee puts it — put him on the path to where he is now, about to take another film to SpIFF.

"It was just a small group of friends at that point," McKee says. "Now it's a big community in Spokane." ♦

People Are Strange Showcase: Respite, Inbetween and Marty (or you can call it Strativarium if you want to) • Sat, Jan. 30, at 2:30 pm • Magic Lantern Theater • 25 W. Main