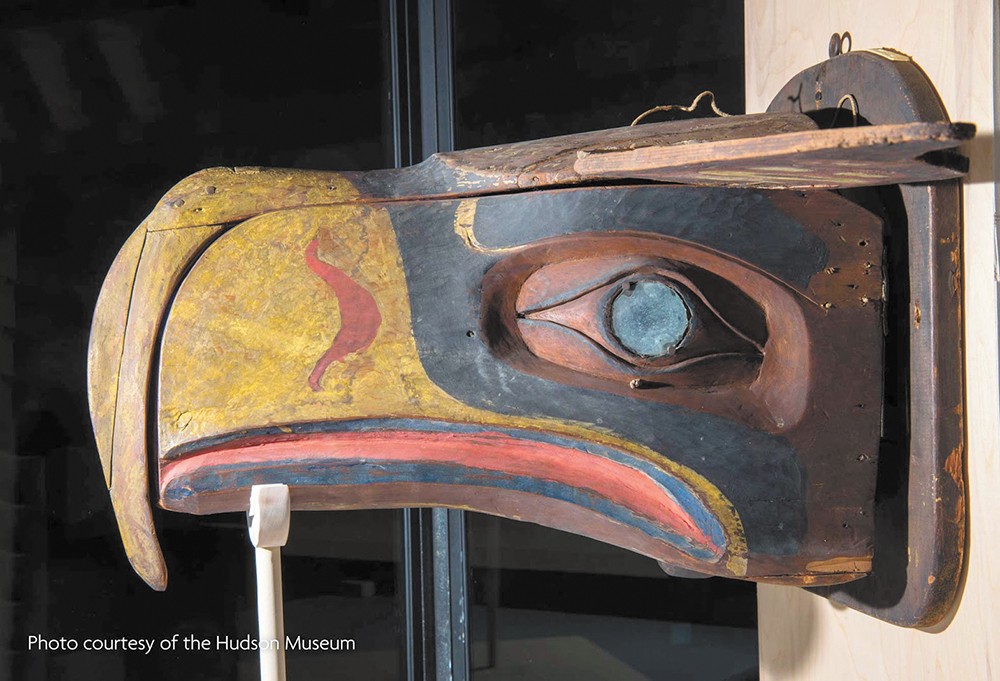 Sometime in the 19th century,

on the soggy, green coast of Vancouver Island, an artist sat down with some fresh cedar. She (or he, nobody really knows) crafted a beautiful mask to be used in the potlatch — the traditional dance festival of the Kwakawaka'wakw people. Our native artist had no idea, but that piece would go on to inspire millions.

Fast forward to 1975, when Seattle was awarded a new NFL franchise and team leaders needed a mascot. Fans offered up ideas, including the Silver Sasquatches, the Clam Diggers, the Kelpers, the Sawdust Eaters — even the Green State Geoducks. They went with "Seahawks."

When the time came to design a proper logo, one committee member recalled a mask he had seen in the 1950 book Art of the Northwest Coast Indians. With a few tweaks, our Seattle Seahawk was hatched.

In 1792, the Kwakawaka'wakw encountered Capt. George Vancouver, then, like most tribes, were decimated by disease brought by the traders and settlers. In the late 19th century, the potlatch was banned by missionaries. So it's possible that the creation of our original Seahawk was a subversive act — an act of staying true to your team, er, tribe.

Whites of the era were known to help themselves to native possessions, and the mask was on display by 1910 at one of the Harvey House hotels that dotted the West. Collector Max Ernst "owned" it when it was featured in the book; his collection is now at the University of Maine's Hudson Museum.

The Kwakawaka'wakw have been on the rebound, with about 5,500 members working to save their language and restore traditions like the potlatch. Now their handiwork has come closer to home; through July 27, you can see the original Seahawk at the Burke Museum in Seattle.

During the potlatch festival, dancers would wear masks as a way to tell tribal tales. This particular mask cleverly hides a man's head inside; the dancer would open the mask at the perfect moment and reveal the human face. Historians say it recalls a legend about a fierce bird of prey that swoops down to earth and takes human form. Doesn't that sound just a bit like a certain football team that's playing in a certain game Sunday?

Anyhow, awesome choice, original Seahawk committee: You celebrated our First Nations and created a timeless icon as profound as it is ferocious. You see the beak on that thing? No Patriot's gonna want any part of that. ♦